Revisiting his Sundance-winning dating drama after a quarter century 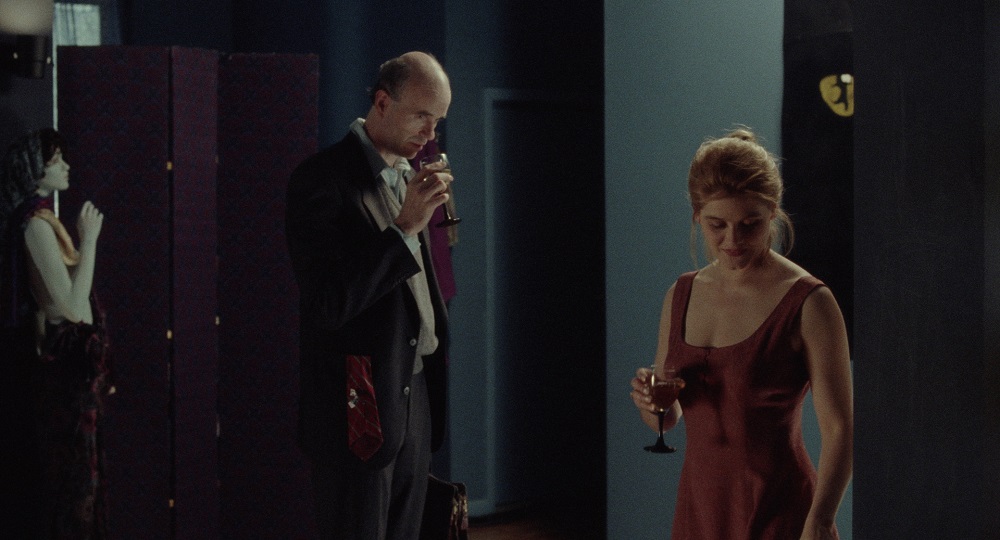 Tom Noonan and Karen Sillas in What Happened Was ..., Noonan's award-winning 1994 relationship drama which gets a restoration and a virtual cinema release this week from Oscilloscope Laboratories

Every filmmaker, when given the chance, has something about a movie they would fix, and when his 1995 directorial debut What Happened Was ... was set to be re-released and remastered, Tom Noonan was no exception.

For George Lucas, it was making the Emperor match across all the Star Wars. Wong Kar-wai changed the rainbow of his early works upon re-release, recoloring and decoloring multiple sequences. When Phantasm got its 4K restoration in 2016, Don Coscarelli was finally able to digitally paint out an errant bucket in the back of a shot that had been distracting him for years, even if no one else could notice it.

For Noonan, it was an errant hand. In his delicate and painful duet with Karen Sillas, which returns as a virtual cinema release this weekend 27 years after its Sundance debut, there's a tiny moment, like Coscarelli's bucket, that he could finally fix. "There's one move in the movie where my hand appears at an angle that it wouldn't appear [so] we just blacked it out. It was a dark moment, and the background's black, so we just painted it out. ... The technology is amazingly advanced, even compared to 10 years ago."

That technology definitely wasn't available in 1995, when he made his second film The Wife. There was a dinner scene around a pyramid-shaped table, with mirrors embedded in the facets. "It's sort of a great gag," said Noonan, but the joke was on him. Two weeks into editing, his production designer noticed that there was a boom mic visible - reflected in the mirrors. "We had to do an insurance claim and reshoot them. The performances are pretty good, but the color, I could never match, and it's always bothered me."

The idea of a mistake is almost alien to Noonan's work: in part, because his development process is so meticulous and determined, and in part because it's so organic. The result is the naturalistic and intimate drama that has defined his career in films like as an actor in films like Synecdoche, New York and Anomalisa, and as a filmmaker in his own right. In What Happened Was ..., which he wrote and directed, he plays Michael, a paralegal at a New York law firm who has been invited to dinner by Karen (Sillas, best known as a regular collaborator with Hal Hartley), an executive assistant at the same firm.

It's a simple, small observational drama which masks its emotional complexity, and took both the grand jury and Waldo Salt screenwriting prize at the 1994 Sundance Film Festival. It also marked a career change for Noonan: After a run of parts that played on his towering physicality (Frankenstein's Monster in The Monster Squad, the psychotic criminal messiah Cain in RoboCop 2, the ax-wielding Ripper in Last Action Hero, and most memorably Francis Dollarhyde, the Red Dragon of Michael Mann's Manhunter), he had decided to stop acting in commercial movies "because my face was twitching. I quit, totally, for 12 months."

Noonan is never precious about his scripts. He explained, "There's nothing in the play that has a particular meaning that I map that I make sure that is hit. Plays where you have to say a line in a particular way to make a scene work, they're bad fucking plays. If you read Arthur Miller, Arthur Miller can sort of only be done one way, and if you don't do it as he prescribes it the whole thing flops. To me that's not good writing." A clarifier: "That method allows some things that I like, but it also encourages a lot of terrible shit that's not that actable."

What got What Happened Was ... past his merciless winnowing was how easily it flowered from one triggering incident, a conversation at a dinner party. He said, "I said to this woman, 'How's your brother doing?' - who I had never met - and she said, 'Oh, he's such an asshole. He was at work a few weeks ago, and this woman at the office invited him home for dinner, and about halfway through dinner he looks up and goes, wait a minute, this isn't a date, is it? And she threw him out.' And I thought, that's the movie. ... I jumped up, ran to my apartment, and wrote 40 pages the first night."

That page 10 wall dissolved, and Noonan kept writing, finishing the script in three days straight, with only one distraction. "I kept a copy of the collected works of [Harold] Pinter on the bed next to me in case I started writing bullshit, because that's what you think what you're supposed to do when you write a script, there's these things you're supposed to do of which none is really true. So that was the only thing I'd do. I'd read Pinter once in a while."

The next step was to take that script and finesse it, which is where a common misconception about the film arises. There's an idea that Noonan wrote it as a stage play, and then adapted it for the screen. What actually happened was that he workshopped the screenplay in front of a live audience: not in a traditional theatrical environment, but with no stage lighting, no formal blocking, no performers projecting to the back of the room because they were acting among the audience who were just seated around the stage on Jackie's apartment furniture. He said, "A great way to learn what the play's about is to have an audience see it."

Immediately, a whole final act of the script was sheared off. During the first rehearsal, he recalled, "I got two lines in and went, 'No, we're not doing any of this. This is a terrible mistake.'"

Another major alteration, this time made after the stage run, was in the pivotal scene in which Jackie read Michael a story she had written. Noonan sliced in half for the film script. "Movies function differently than plays," he said. "In movies, you can't just have someone drone on and on and on." He made those cuts even though it was already on its third iteration before any performance. "I wrote a story that we never used, and then I wrote another story that was better, and then I wrote the story that we used." It was the last element he wrote, and his metric for picking the third version was simple: it made him laugh. "I find if I'm laughing or crying when I write, it tends to be personal, and from the unconscious. It just feels right."

When Noonan edited the script during those in-person performances, he did not crowbar in an artificial ending. Instead, Jackie and Michael's evening draws to a close, but not necessarily their story, and Noonan said he is keen to revisit them, and always has been. "As soon as we'd finished I wanted to write the next act of it, but I had other stuff to do." In fact, he has two sequels in mind, What Happened Next ... and What Happened Last ..., the first of which would catch up with Michael and Jackie 20 years later, as Michael gets locked out of his apartment and has to wander the streets of Manhattan. "It's a cheap thing to shoot," he quipped. "It would be great to be able to do that movie."

The restoration of What Happened Was ... opens as a virtual cinema release at Austin Violet Crown on Jan. 29. Streaming links available here.