The filmmaking Allyn brothers see Mexico through a new lens 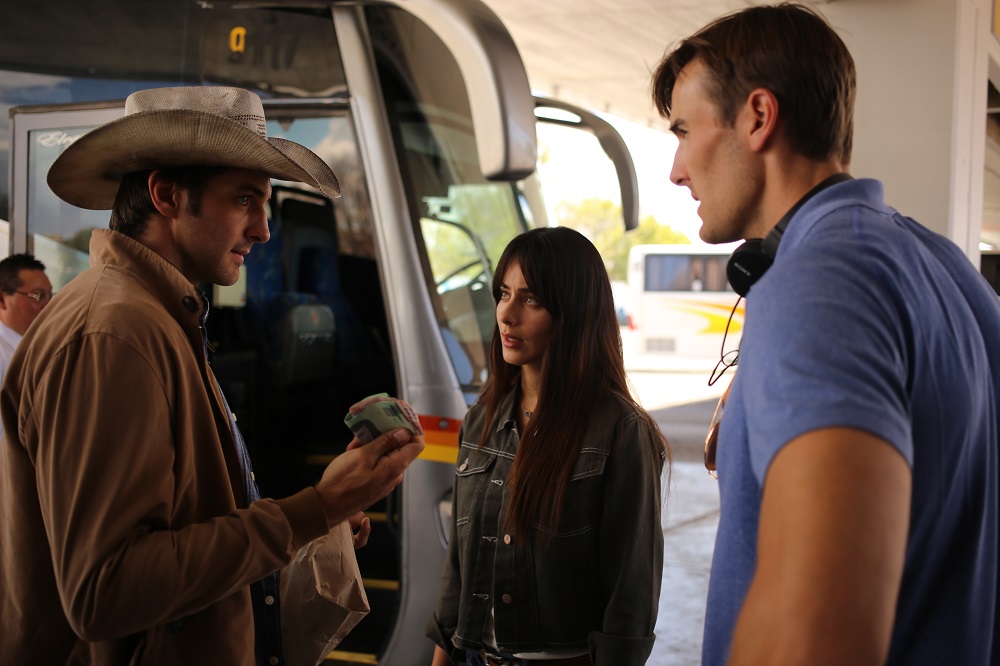 Writer/star Jake Allyn (left) and his brother, director Conor Allyn, on the set of No Man's Land with costar Esmeralda Pimentel (Photo by Jorge Cornejo Guzman)

Wait for one film about the U.S./Mexico border, and of course two arrive in short order.

No Man's Land, the new cross-border road trip by North Texas filmmaking brothers Conor and Jake Allyn, is the compass opposite of last week's big release, the Liam Neeson thriller The Marksman. In that, Neeson takes a young Mexican migrant across America after a shootout with the cartel on the border. In No Man's Land, rancher's son Jackson Greer (Jake, who also wrote the script) flees south after he accidentally kills a young boy crossing north. His father's farm is one of those caught between the border wall and the actual border, these strange spaces that have become the eponymous no man's land. On his road trip across the Mexican interior, he is forced to reconsider what he thought about the country and the people who were right next door, and that he barely understood.

Jake laughed at the comparison with The Marksman. He said, "We have ping-ponged that movie for so long, it's only fitting that we ended up a week apart." While they are in many ways polar opposites, they've circled each other since well before release dates were set. "That movie was originally titled The Minuteman, and our script was originally called Minuteman, and I would get emails from [the Screen Actors Guild] saying, 'You haven't sent in your residual deposit,' and I'd go, 'There's no way it can be that much. We haven't even shot yet. You must be talking about the Liam Neeson movie. We're the little budget Minuteman."

Director Conor Allyn described No Man's Land's opening setting, in the space between nations, as merely the beginning of Jackson's journey. He said, "This film starts at the border, but it's really about two families that both want the best for their families, and they're trying to do whatever they can to do it. It's this line in the dust that gets in the way."

Austin Chronicle: Your film comes at a time when people are reconsidering the border, and what Mexico is really like.

Conor Allyn: We fall into that category, unfortunately, of "whatever makes the news defines the category," and so often in the States Mexico is defined by the border. "It's brimming with illegal immigrants, it's brimming with murderers and narcos." To some extent, that's true, but it takes away from the bigger picture, that Mexico's this vast, diverse country. It's not just this Hollywood-looking, news-looking, sepia border. There's so much more to it. There are good people and bad people, snow-covered mountain peaks and lush jungles, and everything in between, and that's one thing we wanted to do with this road movie – to open the eyes of Jackson as he goes across the country, and to some extent the audience gets to go on that journey with him.

AC: And people have this idea that borders are a fixed thing, whereas they are usually defined by geographic markers like rivers, and rivers move.

Jake Allyn: And they dry up, particularly in Texas.

CA: One of the reasons that these no man's land areas, north of the river and south of any border wall, exist is because of exactly that: You can't build a wall along a winding river. A) because it's moving, and B) the banks don't work. So, right from the start it's something that can't be done.

AC: And a lot of people still don't know that these places exist, or how incredibly diverse the border is. You watch a film like The River and the Wall and you see all these ecosystems where you simply can't build a wall.

JA: And there's the vastness of it. The border goes forever, and just the logistical challenge of the size - and that's not even counting California and Arizona. The Texas part is so huge. To get from Dallas to Amarillo, Dallas to El Paso, it's just a day of non-stop, 100-mile-an-hour highway driving.

AC: And yet we still have people living in these liminal spaces, on farms where the border is their barbed wire fence that's not meant to keep people out, but cattle in. Like Jackson's dad, Bill (Frank Grillo), isn't really that bothered about people crossing the border, it's that they're crossing his farm. It's not an abstract debate; he just doesn't want his cattle to get out.

CA: That element came from research. We'd written the script, and even I found that I had certain preconceptions, as a writer, of how a Texas rancher would react to the border and people crossing it. I was unbelievably surprised by a lot of Texans' generosity on the border. We found this lady in a CNN article, talking about how she lived in no man's land and would leave water and blankets down by the river. She had done that for years and years, but it had gotten harder because of the violence and the numbers.

JA: There's a scene between the parents at the end. Frank Grillo has a line, "I don't know what to do any more. We used to be these other people that were kind and Christian and generous." From the research, we saw people who were really good border residents in the Eighties, when there was a lot of immigration but there wasn't as much of it and it hadn't been going on for so long. So there are these people who have lost their patience after decades, that now are radicalized or militarized. They weren't necessarily trying to be that way, and they don't see themselves as that, but then they reflect and go, "Maybe I'm not who I was 30 years ago. I'm not as kind as I was, I'm not as generous. I've put up walls or borders of my own."

JA: It's judgments based on the color of your skin. "Oh, if you look Mexican or of Mexican descent, you must speak Spanish." You could be second or third generation. I think George is of second generation Mexican descent in California, but when he was a kid he didn't immediately speak Spanish. He speaks pretty good Spanish now, but it's not automatic. He had to learn it.

No Man's Land is in theatres now. Read our review and find showtimes here.