Living With Dying in Our Friend

Gabriela Cowperthwaite on her film's responsibility to the truth 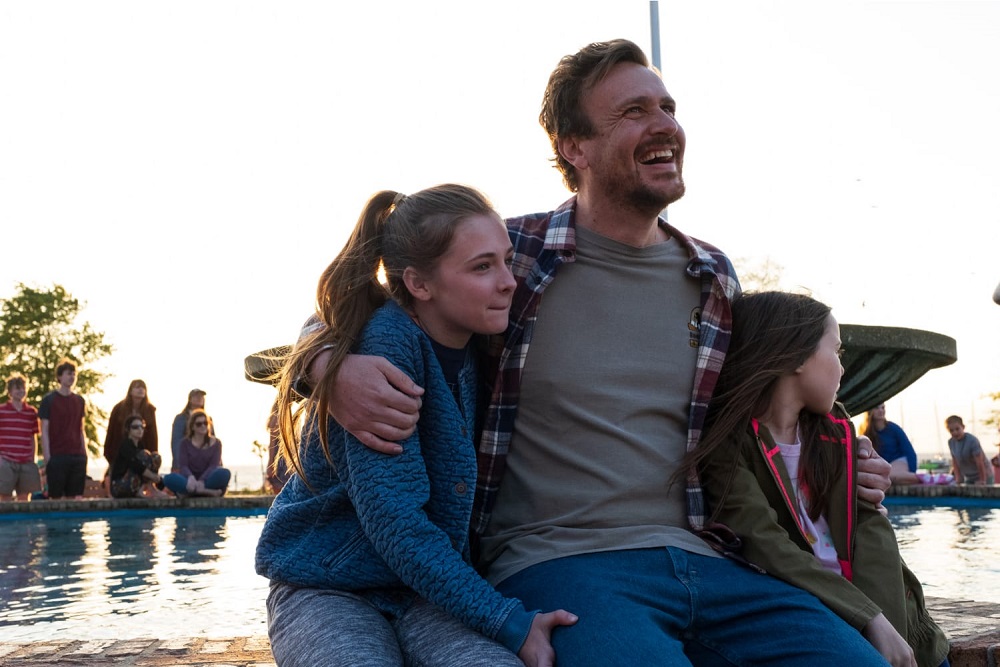 "I wanted Dane to live somewhere between End of the Tour and Forgetting Sarah Marshall, with a touch of The Muppets in there." Gabriela Cowperthwaite on casting Jason Segel as Dane Faucheux, the titular friend in Our Friend which opens in theatres this week. The film, starring Casey Afleck and Dakota Johnson, is based on Matthew Teague's Esquire article on how the real-life Dane helped his family through the loss of Teague's wife, Nicole.

Dying is not a moment. It's not a switch being flicked off. It's a process - sometimes brief, sometimes drawn out for years - and in Our Friend director Gabriela Cowperthwaite wanted to show that.

Our Friend grew out of a 2015 article by journalist Matthew Teague for Esquire, entitled "The Friend: Love Is Not a Big Enough Word." In it, Teague mapped out the two years between his wife Nicole's diagnosis and death from cancer, and how their old friend, Dane Faucheux, gave up his home and career to move in and become a caregiver - not just to Nicole, but to Matthew, and their two daughters. Cowperthwaite said, "In my personal experience, death has come very quickly, and my feelings and my sadness and my grieving around anything I've ever experienced comes from never being able to say goodbye. This was so utterly different. Matt was saying goodbye every day for years, and understanding what that was like."

“This is what it means to say goodbye to somebody. It’s that dance that you do over time. ... You’re coming to terms, slowly, the only way that we’re allowed to as human beings, and that’s messily.”
In the film, scripted by Brad Ingelsby (The Way Back, American Woman, Out of the Furnace), Teague's day-by-day account of those two years is extended and restructured from a chronological order to a more emotionally-centered process. With Jason Segel as Dane, Casey Affleck as Matt, and Dakota Johnson as Nicole, it looks at how their friendships evolved to the point where Dane coming to stay for over a year made all the sense in the world. Our Friend isn't some buddy movie with a mordant twist. It's a story of how sometimes our own little communities can come together in the most unexpected ways when we need them most, from the greatest acts of compassion to the tiniest moment of reaching out. Most importantly, it's a tragic but tender true-life story of loss and loyalty, about how dying, like living, is a process we go through together.

That's what Cowperthwaite wanted to catch, what she called "this ebb and flow." She said, "When you're saying goodbye for that long and for that extended period of time, there are some days that you're OK, and you're adapting, and going about and caring for this person, and you take a walk outside and see something beautiful. Then there are some days when you can't even get out of bed. ... There are some days where you're just living in memory, and some days where you're dealing with sickness in such a graphic way that you're just incredibly present. This is what it means to say goodbye to somebody. It's that dance that you do over time. You're reconciling your love for them, you're reconciling your pain and the hard times in your relationship, and you're coming to terms, slowly, the only way that we're allowed to as human beings, and that's messily."

Austin Chronicle: The original article is sort of a tick-tock of those two years, so where did the non-linear approach come from?

Gabriela Cowperthwaite: The non-chronological format was all Brad. I think he knew exactly what I was suggesting that you don't just want to be marching on one single line to this unbearably sad ending.

It's the difference in making a film where Nicole is firmly a third character. In so many ways what I loved about the article was that it was stripped down. It was from Matt's perspective, reflecting on his life and his friendship and his best friend. But for the film we wanted Nicole to have a perspective on her own death, and what it means to say goodbye to her little girls. I wrote those scenes in of the girls coming to the hospital, just because, as a mother, that's the thing you think about the most - making sure your loved ones are OK. That was so clearly something from Nicole, from a Nicole-like spirit, and so her being a third character who has her own sense of agency and having her own take on what was happening to her was very very important.

That made it a three-hander, which made it a more complicated film and a challenge in some ways because you're never with one person for two long without paying attention to somebody else. But I felt that, as much as I was doing Matt and Dane justice, and to be able to make the film that Matt wants and that speaks to him, there was always this little bird on my shoulder that was like, "Nicole. What film would she want to put into the world?" So we don't shy away from her weaknesses, or the moments she might have regretted, but to make sure this was something to honor her perspective was something wholly new and a departure from the original article.

AC: You started as a documentarian, with City Lax and Blackfish, but with Megan Leavey and now Our Friend you're telling a narrative dramatic version of true stories. How does that change your responsibility to the real people involved?

GC: It's a huge responsibility, and maybe easier in documentaries, in some ways, because everybody is who they are and get to speak in their own voice. In true-life stories, real-life stories, in the narrative fashion, you're not completely given free rein because you want to stay authentic to the truth and to the real story.

In this case, Matt Teague was there on set, and he was an executive producer, and he was intimately involved in weighing in on Brad's script. In some ways, I'd go, "OK, he knows enough to know that, from here on, he's going to be seeing things that jibe completely with how he wants to be portrayed, or how he would say a line." For instance, Matt never, ever cusses, and we did have Casey cussing in our film - very little, but he would throw out the f-bomb in ways that Matt would not. So there were little moments where Matt would go, "I'm just not sure if that really is me," and I'd say, "That's the Matt I need. I can't have him be like, 'Gosh darn it' all the time." There were moments where I had to take creative license, and he's creative, he's a writer, so he'd let it be.

AC: There's also so much of Dane in here that wasn't in the article, which is essential to build him out as an equal third character.

GC: It's this quiet thing. You always pay attention to the person who is dying, and you also pay attention to the person who's grieving this death. Those are the two people who you usually pay attention to in these movies. The idea is that we're turning our heads 30 degrees, to the tether that's keeping Matt from plummeting and falling too far. We're focusing on this anchor who's there, who's going through his own pain and his own loss - he loved Nicole too, and he's losing his best friend - to make this a film where we're doing something unique. It's not just a film about grieving. It's a film about friendship.

And Jason was the first actor I wanted to have for this. I knew I wanted Jason Segel. I talked to him that I wanted Dane to live somewhere between The End of the Tour and Forgetting Sarah Marshall, with a touch of The Muppets in there. That would make up Dane as I understood him.

Our Friend opens in theatres this week. Read our review in this week's issue.