Writer/director on why Liam Neeson is the new Clint Eastwood 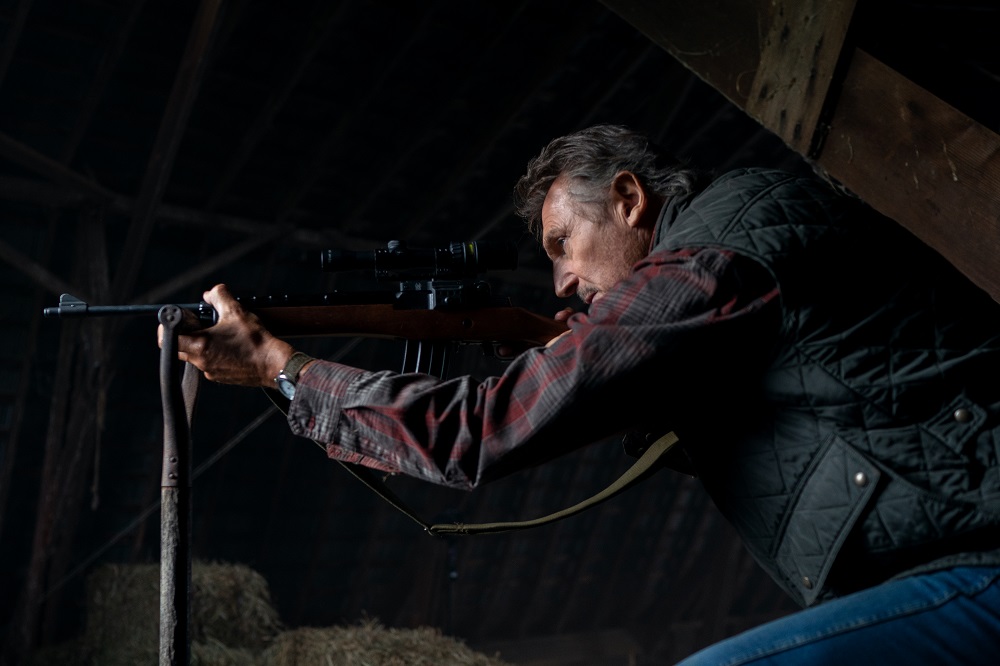 "At our first meeting, he said to me, 'The script struck me as very Eastwoodian.'" Director Robert Lorenz recalls how Liam Neeson became The Marksman.

When you hear the words "Liam Neeson" and "action thriller," you'll automatically have an image of his Taken career; and if you hear "Hollywood border cartel movie," you'll envision all the clichés. But director Robert Lorenz said he wants to subvert those expectations with his new meditation on violence, The Marksman.

When his agent sent him an earlier draft of the script by Chris Charles and Danny Kravitz, it immediately appealed to him: it's a thriller, a Western, and especially a road movie as former sniper and near-bankrupt rancher Joe (Liam Neeson) tries to get orphaned young migrant Miguel (Jacob Perez) to his family in Chicago, all the whole evading the cartel's violent grasp. Lorenz said, "Road movies are great fun because you're following this visual journey you can chart, and at the same time you're going on this emotional journey."

When he first read the script, the debate around the border wall was at its height, and popular media was filled with what he described as a "cartoonish" version of cross-border life. As The Marksman script drew closer to its final on-screen version, Lorenz and his cowriters tried to add more depth and nuance. For example, in that first draft, the Joe character was "sort of a militia man. ... I didn't think audiences would be drawn to that sort of a character, and I certainly didn't think actors would be drawn to that kind of a character." So during rewrites he became "a rancher who I though was representative of a lot of people in this country, and their approach to immigrants. Initially he's sort of indifferent. He's got his own problems that he's focused on. He's lost his wife, his house, and his business, and the other folks coming on his land are the last thing he wants to deal with. But over the course of the movie he realizes that helping others is what gives meaning to his own life." Austin Chronicle: While you have the moral complexity of Jim, there's this idea of the legacy of violence: that no one is simply violent, that it always comes from somewhere. Jim spends his time trying to keep Miguel from violence, but he literally puts a gun in his hand.

Robert Lorenz: You're right on, and I was also trying to do it through the villain character (played by Juan Pablo Raba) as well. I was trying to convey that, here's a guy who could have been so much more. You get glimpses of his awareness throughout the movie as he's travelling and seeing things, realizing that if circumstances had been different for him, his life could have been far different [whereas] Liam's character is fighting to give Miguel an opportunity to make the most of his life.

AC: This is the kind of role that Clint Eastwood was doing in the late 80s and early 90s, and it almost feels like Liam is heading into that same kind of zone.

RL: At our first meeting, he said to me, "The script struck me as very Eastwoodian." He actually worked with Clint years ago, he told me as Clint had told me. It was actually one of his first jobs in Los Angeles. It was one of the Dirty Harry movies, The Dead Pool - he played a villain. They both speak very fondly of each other in that time.

AC: What made you see Liam for this? Because he's very much in this grizzled action hero phase of his career, but his roots are in the wave of Irish character actors that came to the states in the eighties and nineties.

RL: I never really put it in terms of of his current popularity as the Taken star. He's always been such a good actor. He just makes all the characters feel so real and believable, and that's what I wanted for the movie. He was the right age, and he also has a star quality that is really so rare these days. People want to see Liam Neeson performing, and that's extremely valuable when you're trying to get a movie made.

He and I both saw it as something different for him. He was excited about the idea that this was a different kind of role for him, even though people will put him into the same category as his action movies. But I really saw it as this aging character in the later years of his life.

AC: It's kind of like Gerald Butler: people saw him in a particular light, and then he started working with Ric Roman Waugh on Angel has Fallen, and it brought this other aspect out, this fallibility. In a lot of ways, The Marksman is closer to something like Liam's performance in The Grey, which is a character piece wrapped up in a survival thriller.

RL: It's human nature that we want to categorize people and put them in a box, but people are diverse, and the folks that rise in the entertainment business like Liam, and Gerry Butler, they obviously have a lot more going on and a lot more to offer. I just saw Greenland that Gerry Butler did with Ric, and I thought it really showcased a lot of acting talent on Gerry's part that you don't normally get to see. So it's unfortunate that people just look at Liam and just expect Taken. But he's always been such a great actor.

The Marksman is in theatres now, Read our review and find showtimes here.