The Whose Line is it Anyway? star talks nerves and narwhals 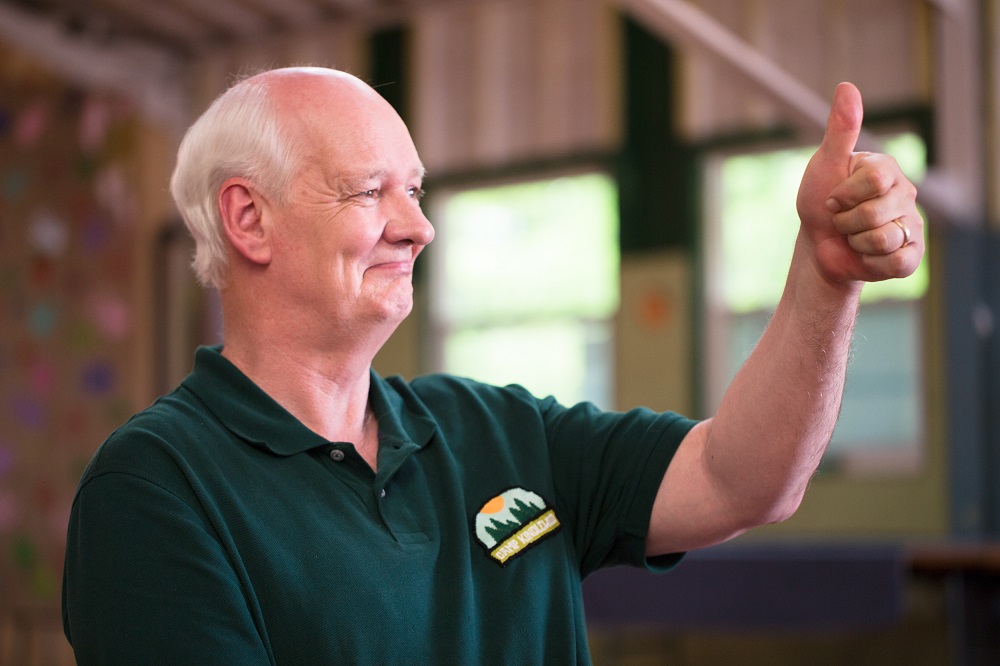 "Most of my performances are like that. Just frayed and desperate." Colin Mochrie on playing the flustered and harried Roger in camp comedy Boys vs. Girls.

Between scheduling and technical issues, the era of Zoom interviews can feel like walking into a conversation halfway through. By the time Michael Stasko entered summer camp comedy Boys vs. Girls, star Colin Mochrie was discussing narwhals. "The unicorn of the sea," as the Whose Line is it Anyway? star described them.

Not that writer/director Stasko was thrown by the topic. Narwhals, it's decided, are cool right now. "My one-year-old son has a narwhal in his crib right now."

How the talk got there is a long story, but it ended up with a defense of Monodon monoceros' rogue tusk and the sporadic possibility for stabbing. "I've always loved forks for the same reason," said Stasko, recalling a story about when he and his brother were young, and staying at the family cottage. "You know how they'll hang artisan cutlery from the wall? There was an artisan fork hanging behind him, and he stood up real fast, and it plunged right into his skull. So we joke about it, but let us remember those ... "

Boys vs Girls is filled with that kind of childhood reminiscence. A sweet-natured throwback to the eighties camp comedy, it puts Mochrie in the middle of turmoil as Roger, the director of Camp Kindlewood. After 70 years of boys one month, girls another, its corporate overlords have ordered that it go co-ed, much to the chagrin of camp counsellors Dale (Eric Osborne) and Amber (Rachel Dagenais). 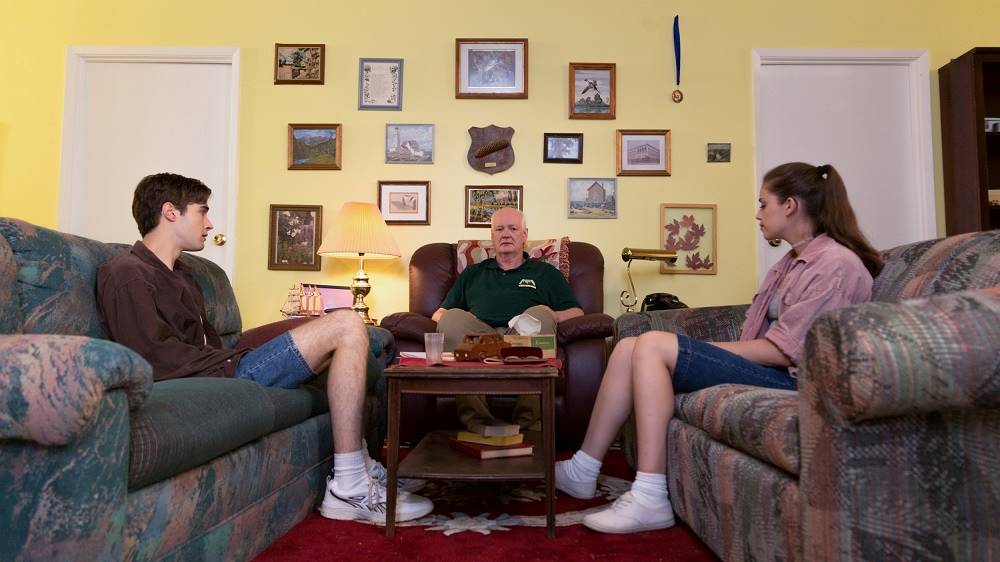 Colin Mochrie (center) tries to keep the peace at a co-ed summer camp in teen comedy Boys vs. Girls

Austin Chronicle: The summer camp is such a North American tradition, and the summer camp movie has become a whole genre. Why do you think those films have become such a part of pop culture?

Michael Stasko: There's a handful of great comedy examples, like Meatballs and Hot American Summer. There was a trend for a while of a lot of horror, where the bad guy's out there killing kids. So when you find the ones that are a comedy, there's a bit more rare these days, especially the throwback, nostalgic ones.

But there's quite a population out there in North America that did spend at some point some time in summer camp. So when your life all of a sudden cuts to 20, 30 years later and you're trying to relive those memories, it's kind of a nice time capsule to look at and look back to.

AC: And they were a good excuse for a sex comedy, particularly in the eighties.

MS: Oddly enough, Colin insisted on taking his short off in every scene, but it didn't call for it. But in the film, there is no sex. Technically, there's not even any kissing going on. Eight years ago, I had a draft that was more of the X or R-rated kind of thing, because there is a way to make that kind of film as well, but ultimately I decided to go with the more PG-13 thing where it's the fun times you had at camp where it could be watched by a younger generation. It's the ridiculous characters you run into at camp, the archetypes, and I was trying to capture that.

“It was this magical world that I was never part of [and] sometimes I think, ‘Oh, I really missed out on something.’” – Colin Mochrie, star of Boys vs. Girls
AC: And Colin, Roger the camp manager is the only adult amid all these kids, and has this wonderful frayed desperation to him.

Colin Mochrie: Most of my performances are like that. Just frayed and desperate.

I really enjoy doing low budget films, because the cast and the crew are really invested, and they go above and beyond what you would do when you do a movie where you just get money thrown at you - from what I've heard. I've never been in one, but apparently that's what happens. But I love the enthusiasm. No one's walking through it.

I never went to camp, because I'm Scottish - it's a British thing that we just don't do it - but I remember fondly Meatballs because my best friend was actually in that movie. So it was nice to be in that genre. Plus, I'm a big fan of sex and kissing, don't get me wrong, but it was also nice that was not the thrust, so to speak, of what the movie was about.

And it was fun. It was fun working with these young actors. I do get frayed in real life and I thought, "Well, this will be easy to put out there on the screen because it's second nature to me." Every piece of work you've ever seen from me, from Whose Line on, I always think I'm the audience representative, the person who says "I could never do that." That's my purpose in any movie, television, or theatre.

AC: One problem I could see with making this kind of movie is that you're going to want to shoot at a real summer camp, but then they tend to be busy in summer - being a summer camp.

MS: We needed to find a summer camp, and if it's a good camp and a good-looking camp, it's going to be in use. So the win-win we had is that we found a summer camp that was just on the cusp of remodeling, so it had that nineties feel to it. It only operated in the months of July and August, so we were able to get it for the whole month of June, just before the changes came to it. It's called Kiwanis Sunshine Point Camp, and it's about 45 minutes outside of Windsor, Ontario where I live. We did look at a bunch of other camps, but when we came down to, "We love your camp, can we use it?" it was, "Oh, well, there's going to be kids here for the summer." But we found the perfect time and location.

AC: And you needed that period look - in part because this is a period film, but also because that's the look that people associate with that golden era of summer camp comedies.

MS: And it definitely is a period piece. 1990, it seems so close but it's 30 years ago and everything does look different.

If you watch the film, it doesn't look like there are any special effects, but there are a couple of things where we would take out a bright yellow car in the background that screams 2018. There's even one shot where we do a quick pan, and there's a cut away some stuff in-between so you don't see a modern playground that's 2015 or beyond. So there was a little masking going on, but to find a place that was trapped in the 1980s, 1990s was key. Then our production designer Emily Eansor did an amazing job decorating every room and giving it that feel. So, when you look at it you might say, "Oh, yeah, they just found a location that was trapped in the eighties," but there was a lot of set dressing that went on to make that happen.

“I went to a camp that was on an island, and you had to take a boat to get there. So there was a good 50/50 chance that you might have a wet bag.” – Michael Stasko, star of Boys vs. Girls
AC: Colin, you're coming at this with that outsider's eye, as someone who first knew summer camps from that film tradition rather than from attending yourself.

CM: It was this magical world that I was never part of. I have many friends who went to camp. My daughter went to camp and became a counsellor, still really great friends with all the people she went there with, and sometimes I think, "Oh, I really missed out on something."

AC: And, as British people, we're both coming at this as outsiders, going "Well, I know Porkies was a thing ..."

CM: Porkies! For the longest time that was the highest-grossing Canadian movie.

AC: Incredible that Bob Clark directed that, Black Christmas, and A Christmas Story pretty much back-to-back.

MS: And all three of those films are beyond cult status. If you think, Porkies is in one direction, but A Christmas Story is beyond a staple. It's on people's number one lists of Christmas movies, and it tugs at the heart strings with nostalgia.

CM: It's the only one that's been made into a Broadway musical. I'm still waiting for Black Christmas ...

AC: So what was your camp experience like, Michael?

AC: What was your worst camp experience?

MS: I went to a camp that was on an island, and you had to take a boat to get there. So there was a good 50/50 chance that you might have a wet bag, and for some kids that was traumatizing. They were there with wet clothes and without their families, and that was the start of their camp experience. Fortunately I had very poor sanitation when I was a kid, and I didn't wash enough, so when I found out my clothes were all damp it was just, "OK, so I won't change my underwear for two weeks."

That's the nice thing about camp: you're surrounded by eternal optimists. Everyone there is just overly-excited about life, which could be an annoying thing for an outsider. But say your bag gets wet: It's that "Turn that frown upside down!" kind of attitude, so even bad things that happen are spun into an adventure.

Boys vs. Girls is available on VOD, DVD, and Blu-ray now.