Friends to the End (of the World) 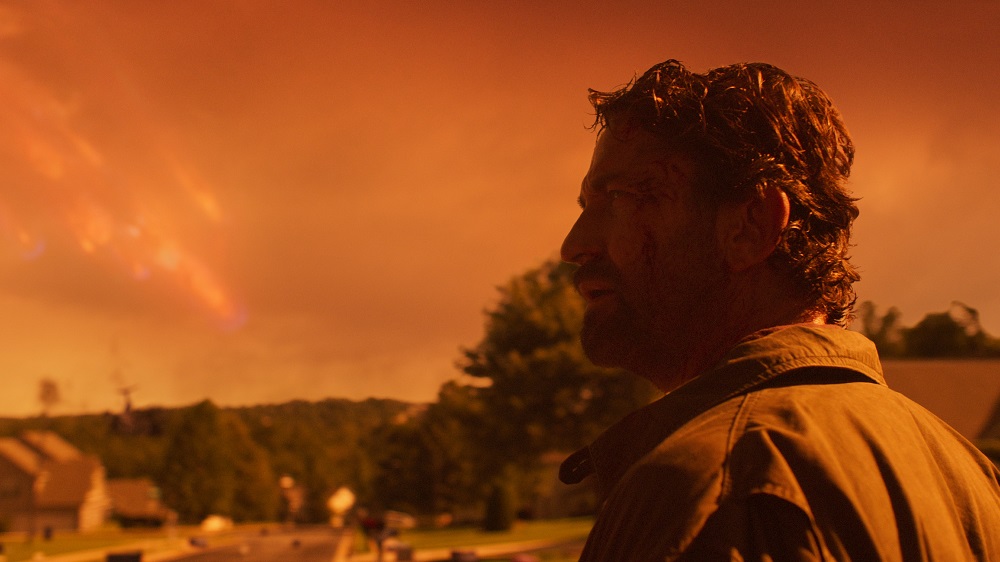 "Gerry Butler is built to be in front of the camera. He is a movie star, and someone who is truly charismatic. Me, I’m designed to be behind the camera. It’s where my strengths are.” Ric Roman Waugh on how his skills compliment those of his Greenland star. (Image Courtesy of STX)

When a director finds an actor on their same wavelength, it’s a relationship to be cherished. John Wayne and John Ford. Kurt Russell and John Carpenter. Klaus Kinski and Werner Herzog (OK, bad example). Austin-based filmmaker Ric Roman Waugh has found that kind of creative pairing with Gerard Butler, and he appreciates what a rarity that can be.

The filmmaker said, “You can have two really talented people, but it doesn’t mean they’re going to jell in a way that’s going to raise the bar to another level. So when you find that, you try to cling on to it.”

The former stunt performer established his directing credentials with his prison trilogy - Felon, Snitch, and Shot Caller. Now he’s lined up a different trifecta: three films in a row with 300 star Butler. In 2019, they paired up to reinvent the blockbuster Fallen franchise with Angel Has Fallen. Waugh has just arrived back in Austin from Saudi Arabia, where he has spent the last three months prepping their next collaboration, espionage drama Kandahar. In the meantime, this week sees the release of their second project, Greenland: This time Butler plays John Garrity, a construction manager who is one of the lucky few selected to survive a comet hurtling to Earth. The only problem (other than the extinction-level event facing all life on Earth) is that he somehow has to get his wife (played by Deadpool’s Morena Baccarin) and son (Roger Dale Floyd) on one of the last flights to the bunkers in Greenland.

After wrapping Angel Has Fallen with Butler, Waugh said, “We definitely wanted to work together [but] he and I knew we wanted to do something different to the big, tentpole action movie.” His then-manager slipped him the script to Greenland “and I just fell in love with it, but much to my chagrin I found out they had another filmmaker and star attached to it, so I never really brought it up to Gerry, and we kept looking.”

Flash forward six months, and the wheel of Hollywood production turned, as it always does. “I found out that the movie had kinda fallen apart.” He talked with producer Basil Iwanyk, and told him that Butler would be a perfect for Garrity, a regular Joe facing the apocalypse. “Gerry read it over the weekend, and it became the next project.”

“when I read that script for Greenland, that was what really struck a chord. It wasn’t really about the comet or the extinction-level event itself. It was the catalyst of watching humanity and what people are capable of.”
Even though they were hunting for a way to work together, Waugh still saw the process of picking Greenland with Butler as organic. “That’s how it should work,” he added. “It speaks to all of us, and it spoke to Gerry as much as it did to me.”

Having found that great collaborator in Butler, Waugh doesn’t see their current run as the end (“I hope this is two or three of 10 or 15 films together”). So why is he so eager to clock in again and again with Butler? “Number one, he’s a great human being,” Waugh laughed, but there’s more than that at play. “We also have a professional chemistry, and a trust that has been built up now where we will push each other’s buttons – meaning we’re pushing each other to greatness, and not resting on our laurels. He cares as much about the process, but there’s a trust within both of us, and each respecting the other’s job. I’m not built to be in front of the camera. Gerry Butler is built to be in front of the camera. He is a movie star, and someone who is truly charismatic. Me, I’m designed to be behind the camera. It’s where my strengths are.”

Just as Waugh has found something special in his relationship with Butler, so studios have found something out of the ordinary in the filmmaker. At first glance, his movies look like standard hard-boiled macho cinema, but his specialty is in weaving in more complex plots and narrative techniques than the standard blockbuster. His early prison films were an indictment of failures he saw in the penal system, based on his experiences as a volunteer in the California Department of Correction's Division of Adult Parole Operations. Angel Has Fallen had protagonist Mike Banning dealing with PTSD and CTE from all those explosions and crashes. In Greenland, he wanted to look at how people really react to a life-threatening disaster.

He recalled watching the mocking response to L.A. news anchor Kent Shocknek taking shelter under his desk during the 1987 earthquake. "Why would you make fun of somebody being human?" asked Waugh. “It's this idea of, when the world is falling down around us, how would we act, and how will we come together?" "Gerry and I agreed, from when we first started, that we really needed to find our Allison who could carry the movie in the way he was going to carry the movie." Ric Roman Waugh on seeing Morena Baccarin as colead in Greenland. (Image Courtesy of STX)

Austin Chronicle: This really feels like a movie made by somebody who grew up watching character-driven disaster movies of the 1960s and 1970s.

Ric Roman Waugh: I was looking to do something in the horror space, or the disaster space, but I wanted to do something with a unique point of view - like Children of Men was from the inside out. I remember reading that book. I was a baby writer in the business and auditioned to write the screenplay, and I was enthralled with it because I was like, “Wow, you can take a high concept idea – what if no woman was fertile on the Earth, and babies stop existing, and you’re watching the ticking clock as the younger generation becomes the older generation as we’re going to create our own extinction, and what happens if one woman is fertile.” Now think about that. That is the most high-concept thing you could ever thinking of, and you could absolutely do it from the outside in, how the entire world would react, all the governments – but it didn’t. It stayed in the intimate story of all the people who were around this one woman.

A Quiet Place did a very cool, intimate story of a family around monsters that I had kinda seen before. They weren’t really that original to me. They were a culmination of other things I have seen in other movies, from Predator and Aliens, you name it. But I didn’t really care, because I was invested in the personal story of the family.

So when I read that script for Greenland, that was what really struck a chord. It wasn't really about the comet or the extinction-level event itself. It was the catalyst of watching humanity and what people are capable of. It was watching this family atone, trying to come back together. So it was always from their point of view, and I loved that. It is, for all intents and purposes, the anti-Roland-Emmerich-movie.

AC: It was missing that scene that's been in every disaster movie for the last 30 years, this big crisis management room with a giant screen, and people at 1960s NASA Mission Control Desks. You don't have that.

RRW: That was our big thing. We never wanted to cut to the president. We never wanted to cut to anybody. ... The conceit of the movie is, we get all information from the television and from radio, so we're trying to work out, almost like Orson Welles' War of the Worlds, what is happening. I'm sitting in my living room, trying to get the information. Then, all of a sudden, Covid hit and we go, no, this is how our world works during war, during riots, during pandemics, during anything.

The way we did all the radio announcers and the television reporters is that we did a War of the Worlds kind of thing. We brought in real newscasters, people who have done it for a living, and then talked about the emotion that they would feel of having something like NASA tell them, "Tell the world they're going to die tomorrow."

AC: There was a time when the disaster movie was the blockbuster. So what are your favorites?

RRW: When you go back to movies like The Towering Inferno, there were stories within the stories, and characters with flaws. It wasn’t such an effects-driven genre, but then technology caught up, and the CGI world overwhelmed it in a way where it became all about the spectacle and less about the character work. … I loved that about Greenland. It never deviates from that, it always stays in the point of view of the Garritys.

I also loved that it was a true two-hander. It wasn’t a big superstar like Gerard Butler and, oh, there’s the tagalong wife and he’s going to win her back. It was very much a two-hander between Gerry and Morena Baccarin. Gerry and I agreed, from when we first started, that we really needed to find our Allison who could carry the movie in the way he was going to carry the movie, and equal. So when you’re with Allison, you’re in her story. Even to the point where you’re with little Roger Floyd (playing Allison and Mike’s son, Nathan), we really wanted to have the story feel like you’re in the point of view of the characters themselves, and how the extinction event and the disaster is affecting them, versus watching from the outside.