Toward the Skylin3s With Liam O'Donnell

How the alien invasion franchise took the fight into space 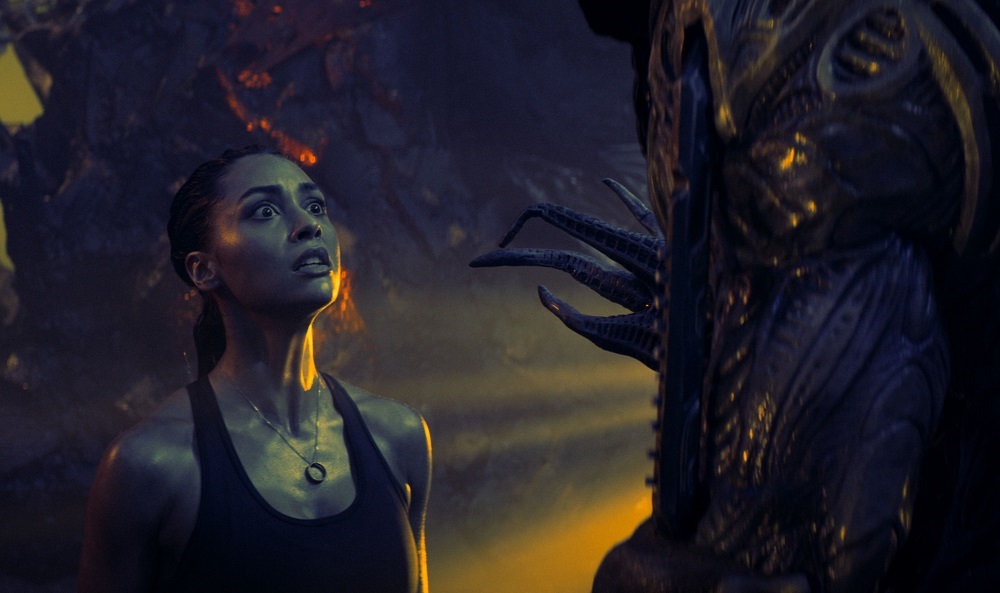 Lindsey Morgan as Rose, the heroine of Skylin3s, the third installment in the Skyline franchise

They call it the filmmaking process for a reason. When Liam O'Donnell wrapped shooting on his 2017 sci-fi-action-horror fusion Beyond Skyline, he had no idea he was missing the vital segment that would set up the third movie in the franchise, the galaxy-spanning Skyline3s.

In 2010, he wrote and produced surprise hit alien invasion flick Skyline, a throwback to '50s interstellar monster movies with a modern, gory twist as the Harvesters use human bodies for spare parts. In 2017, he moved into the director's chair for Beyond Skyline, a sequel of sorts that introduced new characters and had them crash land in Indonesia, where the aliens faced unexpected resistance from masters of hard-striking martial art pencak silat. The third film, which gets its Texas premiere at Other Worlds Film Festival before its Dec. 18 release, sees the return of human/alien hybrid Rose (Lindsey Morgan, currently filming the Austin-shot reboot of Walker, Texas Ranger). This time she’s headed into space on a mission, looking for a cure for a plague that’s striking down pilots – humans whose brains have been transplanted into alien-engineered bodies.

Rose was last seen in Beyond Skyline’s closing coda piloting an alien ship against its own creators. It was a prelude of what was to come in Skylin3s, but that wasn’t O’Donnell’s original plan. "There's a version of that movie in my hard drive that didn't have her in it," he said. The last audiences were supposed to see of Rose, she was still a child, and her story was over. "It was completed, it was finished, and that was the original script. They just walk off into the sunset." He admitted that was a reaction to the open-ended denouement of the first film ("Some people complained so much, 'Oh, it's just a sequel tease,' and I went, 'OK, fine, it's over.'") However, when he showed what he thought was the completed second film to friends, he realized he’d gone too far the other way. "All the feedback we got was, 'Wait, that's it?'"

The most consistently asked question was about the fate of young Rose, the first human-alien hybrid, with an accelerated metabolism and the ability to use harvester tech. "They were very worried for her wellbeing. Is she going to die?" So O'Donnell went back and shot a "10 years later" coda with the now-fully-grown Rose. What he didn't know at the time was that he'd set up the third film in the series.

However, he’s used to rebuilding the story on the run as new opportunities present themselves. The pencak silat part of the second movie only came about when he started location-scouting in Indonesia, which is where he met practitioners and stunt masters Yayan Ruhian and Iko Uwais. “The first dinner with producers there, they go, "What do you think of The Raid guys for this?" Holy shit, yeah, and once they get involved and they start doing this choreo, it just changes that movie for the better in a completely different direction.” He admitted that he’d always wanted to make a full-blown space opera, and adding that final sequence with Rose in the second film “gave me another genre mash, just a full Star Wars, space-explosion shot. From that point I went, 'OK, now I have a whole new sand box to play in. ... Within two months, I had the treatment for part three."

For O’Donnell, that’s the big bonus for working in independent cinema as his own writer, director, and producer. “There's no adult in charge, as I like to say,” he quipped. “There's no studio that says, ‘It has to hit this quadrant, or that quadrant.’ It just allows me to follow whatever's inspiring me.” 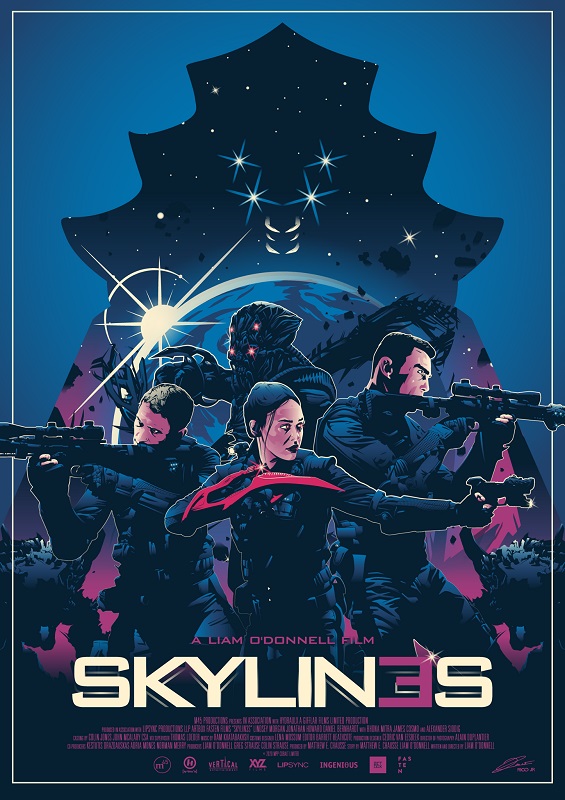 Austin Chronicle: Every film in the series feels like a new format, a completely different angle on the alien invasion, and every time you get rid of most of the cast.

Liam O'Donnell: It isn't premeditated. The only thing that is premeditated is to not repeat yourself. I take that as a little bit of your responsibility. I've done, in the past decade, these three Skyline movies, and there's all these other projects in-between, and they're really impossible to get up off the ground. There's near-misses, there's ones that go back to the drawing-board. So, for me, I'm able to make these other movies through this same franchise, getting to explore different types of genres and explore completely different things.

AC: The first film is very much a '50s throwback, the second is an '80s action hybrid. Was there any particular vibe you were going for here?

LO’D: It was obviously Aliens and into Starship Troopers. It's funny, I watch Starship Troopers usually once a year, but I didn't – I listened to "Klendathu Drop" a lot on set while we were filming this, because it gets me pumped up. It wasn't until we were in the UK and finishing the film that I was watching Starship Troopers and I went, "Oh my god, this film is so fucking crazy. The budget, the scale of the violence, I don't think it will ever be topped."

That's why I hesitate to even put us in a stone's throw distance of Aliens or Starship Troopers because we're a much more modest film. But those are obviously influences, Pitch Black is a definitely an influence. One of the ones that was surprising to me, and it wasn't until the edit that I saw that it was an influence because it's one of my favorite movies, and it's one of my son, who's 11, his favorite movies is Fellowship of the Ring. There's a lot of the Mines of Moria, and even the Ring imagery, even the opening narration with James Cosmo is a little bit Cate Blanchett, so that's one of the things where I was like, "Oh, OK, that's has definitely seeped in."

AC: You switched things about between one and two – I remember that you mentioned that the protagonists of the first sequel started off as background characters we see in the distance in the first film – but what made you realize that you wanted to stick with Rose this time around?

LO’D: One of the issues with one and two – not issues, but the things that are hard about the movies – is that the leads are regular, everyday guys and girls. They're normal people caught in a situation. Once you have Rose, and you have all that heavy lifting done by the end of two, and you've set her up, she's very central to the world. So she's a very natural lead character that can drive the narrative. So, for me, that was what was so appealing about it. We have our John Connor, superhero savior here. Let's see her fail. Let's strip her down and build her back up.

Other Worlds 2020 runs online Dec. 1-6. Badges and info at www.otherworldsfilmfest.com.