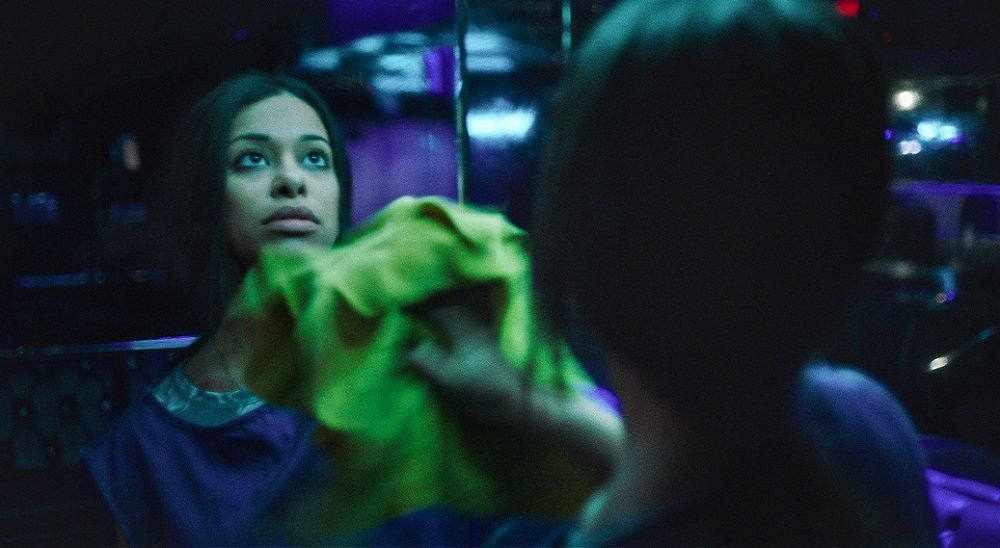 Welcome to Short and Sweet, our look at short films playing at Austin Film Festival. This time it's "Gabriela," filmmaker Natalia Kaniasty's story of a woman (Lucia Sawh) working as a cleaner at a strip joint, who begins to consider her options and who she is.

Austin Chronicle: You talk in your director's statement about visiting clubs for your research. What was the process, and how long did it take?

Natalia Kaniasty: Initially I was apprehensive. I had never been to a strip club before. I started with a daytime club not far from where I lived. I must’ve looked a little lost when I walked in; a dancer on break, skeptically asked: “are you here for an audition?” Being that I’m lanky and uncoordinated, I laughed: “you better hope not!” She introduced me to a manager who showed me around. I shadowed a cleaner for a little while that day and it activated my imagination. I visited a few more clubs and it was similar at all of them, I’d get mistaken for an audition, then get shown around.

The initial research period involved a few visits over a couple of weeks. Later, as I was location scouting, I spent more time observing. When I locked in a location, the owner was very accommodating. He regularly let me hang out before they opened, so I could get a real sense of the club’s routine. It helped bring detail to the script.

AC: Funny story: pretty much every strip joint scene in Austin is shot at the same club because it's the only one with enough space to fit a 35mm camera in between the seats and the stage. How did you find a club that would allow you to shoot, and what were you looking for in the location?

“I must’ve looked a little lost when I walked in; a dancer on break, skeptically asked: ‘are you here for an audition?’ Being that I’m lanky and uncoordinated, I laughed: ‘You better hope not!’”
NK: I’m not surprised! I realize now that shooting in a strip club poses many challenges due to the room layouts and mirrors everywhere. You have to find ways to get interesting shots without tearing the place apart, especially if you’re on a tight budget.

To be honest, that’s why my search was motivated mainly by logistics and narrowed quickly to clubs closed during the day with owners willing to work with us. In New York, they can make so much money on a shoot, we weren’t worth the effort to most. It wasn’t easy, and more than one place fell through. The owner at Starlets in Queens was very nice from our first encounter, but it took some coaxing. I think our sheer determination worked on him in the end. We were lucky, Starlets is a popular club. It’s very spacious, so it gave us the opportunity to explore lots of different corners. As I said, I got more specific about the scenes when I knew where we were shooting. In a way, I was working backwards. I think it helped bring more color and specificity to the screen. That said, we did have to get creative with the mirrors!

AC: Out of all the personalities that you find in the day-to-day side of a strip club, what was it particularly that drew you to the cleaning staff, and to the character of Gabriela?

NK: Truthfully, when I set out to examine this world, it was with a very basic question: “who cleans a strip club?” I was first drawn to the question and then the character emerged. The story followed. I discovered a lot of jobs or tasks I did not know existed in strip clubs, from the “house mom” in the dressing room to a caterer in the kitchen whipping up a buffet for customers. I wish I had time in a short film to show all of them, but I think when the story started to zero in on a theme of self-worth in our jobs, I knew I needed to focus on the cleaner and her motivation. Gabriela came to life when I started to wrestle with the economics of the workplace. Some dancers make a lot of cash, so why might a woman choose the job of cleaning the place instead of dancing for more money? Gabriela became the conduit for my question.

AC: The film looks at Gabriela as making choices about what she wants to do next, but there's no judgement or prurience about the fact she works in a strip joint. When you were developing the character, and working with Lucia, how much did you work on her back story about coming to be where she is in the story?

NK: Again, I think it comes down to the question of why choose one job over another. I spent a lot of time thinking of reasons a woman might not dance. Those reasons informed a back story, but I did not want to be explicit. I think it’s easy to tick off some obvious explanations: she’s religious, she’s intimidated, she doesn’t think she has the body for it... It was more interesting to me to observe Gabriela asking herself the same question and then to see her explore, even enjoy, the possibility.

Casting Lucia definitely emboldened the character. Lucia is a fantastic dancer and very alluring. We also spent time talking about whether we could personally see ourselves working as strippers (in my case, if I didn’t have two left feet). I think our own shared curiosity came out on the screen and that’s why in the end there’s no “verdict.” I don’t have a definitive answer. Lucia does not have a definitive answer. Thus, Gabriela doesn’t have one either.

AC: You also talked in your statement about your fascination with offbeat jobs: what's the strangest or most unusual job you ever had? (Personally, and aside from writing about film which is such a weird profession, either sheep farming or transcribing tombstones)

NK: Full disclosure, although I’ve had numerous varied day jobs, from census worker to senior caregiver, I’m not sure any of mine were that unusual. It’s funny that you mention sheep farming though! My parents are from Poland and still have a home there in the mountains where you see a lot of shepherds. I like to say that if filmmaking doesn’t work out, I’ll go tend sheep, and my parents always say, “you know that’s harder than making movies, right?” If your readers have a suggestion for another off-beat career alternative, I hope they write to me!