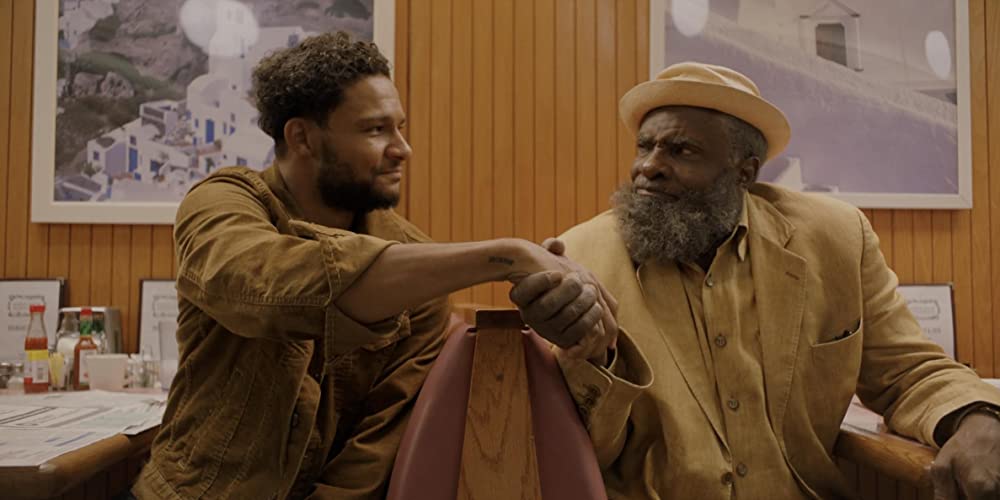 Payton Poitier is a young Black man whose path toward love and upward mobility hits a snag. Worse, the stumbling block is the result of his own mistake. Can Payton sidestep the past and thereby ensure a promising future, or is the future merely a summation of the past?

Laid off from his job, Payton (Justin Etheridge, who also directed and cowrote the script of this independent drama) worries that he won’t be able to keep up with his fiancée Shannon (Kali Racquel), who is both smart and wealthy. By chance, he meets an elderly man in a diner (a location that is vital to the film’s opening and closing scenes), and this encounter is about to alter his life. The old man with a long scraggly beard is Gregory Devereaux (the ever-versatile and prolific actor Keith David), who erupts into a coughing fit that prompts Payton to give him a lift home. Payton is surprised to discover Gregory living in a mansion, and even more startled when Gregory’s daughter Barbara (Nefetari Spencer) offers him a job as her father’s caretaker for $5,000 a month. Money problems solved for the moment, there now remains only the secret matter of the child his ex-girlfriend is carrying.

The timeline of Payton’s upcoming nuptials progresses in parallel with the birth of his child. The reasons for Gregory’s contentious relationship with his daughter are gradually teased out and serve as an example of the damage experienced by father-deprived children. More complexity might have been extracted from each character’s situation but Good seems more invested in its thematic pursuits rather than deep emotions. Handheld camerawork sometimes adds to the illusion of intimacy, but abrupt edits of time and place contrarily remove the viewer from the moment’s flow. Full of ambition, Good strives to making its better best.