Who's your favorite video store owner, and why is it not Rad Chad (Jeremy King), star of horror anthology Scare Package?

Why does Aaron B. Koontz keep killing Jeremy King? "I lie awake at night," the actor mused, "wondering why Aaron Koontz, maybe, possibly, in the back of his mind, maybe doesn't like me. And doesn't like me so much that he wants to kill me whenever he gets the chance."

The filmmaker and his comedic muse have a long history of murder, with King playing the various members of the long-suffering Buckley family across four of Koontz's films. In grisly-funny horror short "The El Chupugcabra" King was Padre Buckley, the first of his line to suffer a bloody demise on-screen. Now Tad Buckley in Camera Obscura (Koontz's 2017 feature debut), he may have escaped the family curse that started with Bill Buckley, who meets his own period fate in Koontz's supernatural western The Pale Door. As for Chad Buckley, aka "Rad Chad," the owner of Rad Chad's Horror Emporium, well, to find out what Koontz has in store for him you'll need to press play on horror anthology Scare Package, which is unleashed this week on DVD and Blu-ray, just in time for Halloween screams.

Of course, whatever Chad's fate, he was always braced for the worst. "Every time [Koontz] calls me," King said, "it's 'Well, how do I die, and tell me about the script afterwards.'"

So why does King end up on Koontz's slab so often? "I just think that's his way of showing affection. Instead of hugs, he gives you murder scenes." 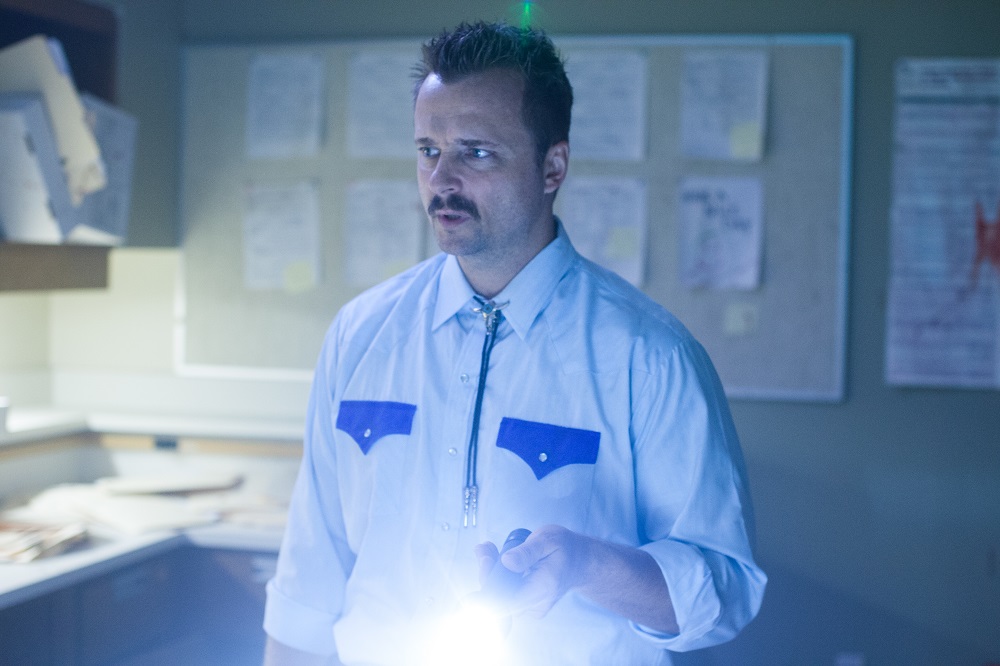 "I think a lot of Rad Chad came from [director Aaron B. Koontz] with his encyclopedic knowledge of horror films and films in general, and then a lot of it came from our relationship working together." Scare Package star Jeremy King on the sorta-hero of the Austin-made horror anthology

Austin Chronicle: So how did you first meet Aaron?

Jeremy King: We met way back, around 2003. I was doing a short film, one of my first short films, and I think he was a producer on it. I was playing a bicycle cop, and I was the comedic piece of that. We did a lot of takes, and we ended up doing a second short based on my bike cop character.

When they were developing Paper Street Pictures about eight or nine years later, [Scare Package producer and cowriter] Cameron Burns wrote me and asked if I'd be in their short film "The El Chupugcabra." He goes, "We've got a good place for you to stay, we can give you food, we can't really pay you much," and I wrote them this big, two-page answer of, "Look, I'm a serious SAG actor now, I can't be messing with piddly stuff like this." Then at the end I went, "Man, of course I'm in. I'm just kidding."

And we had just such a good time doing "The El Chupugcabra" that it brought back to me my love of making films in general. A lot of times you get sidetracked by the business side of things, and it was the first project in a really time where we just had such an amazing time. Then he brought me back for Camera Obscura playing this outlandish role in this very serious psychological drama, and then we got to do Scare Package. It's been a blast.

AC: So where did Rad Chad come from? Was he always written for you?

JK: Oh, yeah. On Camera Obscura, they sent me the script and my character's name was Jeremy. I read it a few times, and I heard it in a different voice, and I called them back and said, "By the way, my name's Chad Buckley, just so you know." They go, "Ooooooookay." And I didn't know this was being produced by Universal, so I didn't know that higher-up people would be seeing my audition, so I sent 'em this ridiculous, outlandish, 15 minute audition that was very loosely based on the script. He called me back going, "Dude, we're all rolling on the floor laughing, but I need to send this up from here so can you please reshoot this and stick to the script?"

I think a lot of Rad Chad came from Aaron with his encyclopedic knowledge of horror films and films in general, and then a lot of it came from our relationship working together. He knew my tone, he knew the energy I brought to the table, so it was great getting to read it because it was already in my voice.

“Rad Chad grew up with [Joe Bob Briggs] and thinks of him as his father, even though he’s probably written him a million letters and never got one back.” - Jeremy King
AC: And after the credits there's just a butt load of you riffing, and the only way to do that is from having a really clear idea of who the character is. So who is Rad Chad?

JK: Rad Chad's just a lovable guy going through life. He loves horror movies, he loves his little store that he probably thinks is very successful in his mind, but he's just a "live life day-by-day" kind of guy, just very happy-go-lucky."

Aaron had me watch a bunch of horror movies leading up to shooting. "I need you to watch Halloween I-IV, I need you to watch Friday the Thirteenth, I need you to watch A Nightmare on Elm Street," and just the way it was written, and the relationship that me and Aaron have, well, he lets me play. Once I've done everything we're talking about, and I've done my work at the other end, once you're on-set, and I'm working with Byron Brown and Hawn [Tran] in that video store, it gets pretty crazy.

AC: And you're the center of your scenes, with Byron appearing out of nowhere and interjecting nonsense, which you have to balance out while still leaving space for Hawn, who's purposefully giving a much more restrained performance.

JK: A lot of it is remembering and knowing all the points in the script that you need to hit - staying loose with that while still staying basically on-script. On the most of the films that I work on, I love making people break character and crack up during a take. On this one I had trouble keeping a straight face the whole time I was working. Byron is just a master at throwing out insane things that are so out of left field that it takes you a moment to recognize what it is, and instantly you want to cry laughing.

And then Hawn is so good because he's just a funny guy. He doesn't even have to do much to be funny. There's just something about him that's so joyful.

AC: And then there's the Joe Bob Briggs component, with his cameo and Chad's total fanboying over him. When Aaron cast him, he was really only remembered by die-hard horror fans, and then there was the whole Joe Bob explosion, and his Last Drive-In becoming such a huge deal on Shudder.

JK: Aaron pretty much had him in mind, so I joined the Mutant Fam on Facebook and started looking things up. Even before the Twitter stuff there was still a good amount of fans out there, so I sort of did more research on that.

But my whole thing was not riffing on Joe Bob as a character, but Rad Chad grew up with him and thinks of him as his father, even though he's probably written him a million letters and never got one back. Throughout, Joe Bob's character is very dismissive and I'm like, "Whatever you want to call me, sir." So my job was not to riff on the Joe Bob jokes, but to bring the love for my papa.

Scare Package is out now on Blu-ray and DVD, and available to stream on Shudder.