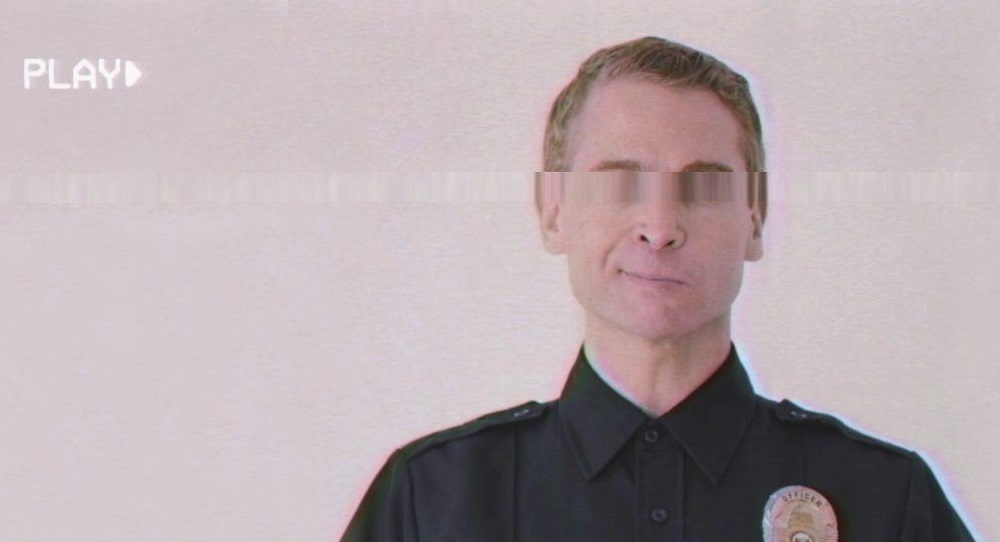 There's an undeniable boldness to making a movie in 2020 where a cop is the figure of sympathy. But not every film is Survival Skills, a fresh look at the inanity of old educational VHS tapes where the well-intentioned officer gets ground down by the impossible cruelty of the real world.

Jim Williams (Vayu O'Donnell) is fresh out of the academy, and assigned to a fresh new beat. He looks like he was freshly cast out of plastic, a Ken doll made flesh, and he quickly gets on the nerves of his partner (Ericka Kreutz). She knows that his chirpy, can-do attitude is going to either be snapped by the day-to-day grind of the job, or get him killed.

But Jim isn't real. He's a character in an educational video, being narrated by Stacy Keach. He's the archetypical Good Cop, blank eyes and bland smile, and the Narrator runs him through a series of do's-and-dont's scenarios. But the plastic starts getting dented and scratched pretty quickly when he gets called in on a domestic violence case. He does everything by the book, and it's not enough. He goes above and beyond, and it's not enough. He breaks the rules, and it doesn't fix anything. What good can he possibly do?

While the recent tapehead chop-up VHYes used the medium for poignant, silly and sometimes sinister comedy, Survival Skills is a searing look at the impossibility of the Mayberry myth. Jim is the kind of rookie that Andy Griffith would love/hate - his excessive by-the-book energy would drive him bonkers, but his absolute dedication to doing the right, compassionate thing would make him the fictional cop's favorite. Yet put that in the real world and Jim is going to get broken in two. Can he even be saved by a cinematic happy ending? Even if he is, would that really be the ending we deserve? All we can do is sit and watch with the Narrator as Jim's inevitable crash into the wall of reality transpires in real time.

Writer/director Quinn Armstrong isn't making pro-cop propaganda with a fuzzy VHS tracking gimmick over the top. Instead, Survival Skills brings you in with the tricks and fun, then takes a long, hard look at what it is we say we want from our police, and how impossible that is when people are so dreadful, and life is so complicated. It doesn't detract from the current conversation about police violence, but instead raises new, complementary questions about the lack of wrap-around services, the emotional cost of being the first and last resort for all society's ills, and the lies society tells itself about how a few changes in recruiting will fix everything. If the scene of a veteran cop recounting every body dump he found, every tragic scene that he had to help clean up, every kid by the side of every OD'd parent doesn't make you think maybe you need to rewind, well, maybe you should at least give Jim a second chance.

And none of this would work without a stunning and nuanced performance by O'Donnell. He could take shortcuts and make Jim seem more rounded by making him, well, more real. But he finds ways to make this chirpy caricature of a cop truly rounded by coloring within those precisely-defined lines. The blue-eyed, blonde-haired innocent didn't fail Mayberry. Mayberry failed him, and all of us.