Vulcan Video Lives in the Alamo!

Not a dream! Not a what-if! Video Vortex comes to South Lamar! 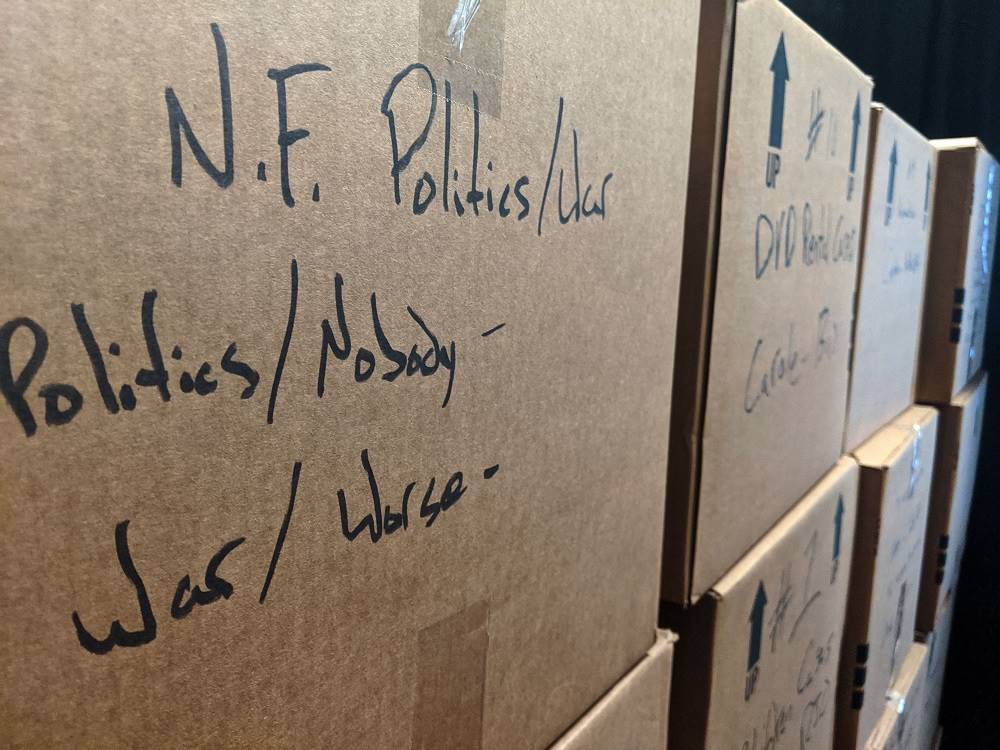 The Vulcan Video collection, heading soon to the lobby of the Alamo South Lamar

Rumors had been bubbling for a few weeks, but now it's all been confirmed, just in time for International Independent Video Store Day: The Alamo Drafthouse will be the new home to the massive collection of movies from the late, lamented Vulcan Video, and they will be available ... for free!

The 50,000 tapes of the Austin movie institution were left homeless when Vulcan Video closed its last location back in April. However, they weren't left to molder: instead, they were all packed up and relocated to the Alamo's corporate headquarters in Hyde Park (the former AISD Baker Center). That's when the painstaking cataloging process began, in time for the next big step - becoming Austin's Video Vortex.

Starting next year, the discs and tapes will be available at the Alamo South Lamar and the Highball bar. You'll be able to take two titles at a time, for up to a week - for free. After that, you'll have to pay late fees, but the Drafthouse is guessing that you'll want to come back for new titles before then.

It's not that the Drafthouse is completely new to the video rental game. Under their Video Vortex banner, the cinema already has rental outlets in its Brooklyn, Los Angeles, and Raleigh locations, as well as plans for a massive Kung Fu cinema collection (to go with RZA's The Flying Guillotine Bar) at the upcoming Staten Island site.

But what about the plague of the video rental store, late returns? There are currently around 1,000 tapes left out in the community since the store closed, and the Alamo has a simple request: just bring them back to South Lamar, no questions asked, and return them. Even better: if you leave a note with your name and email address in the case, you'll get a free Alamo on Demand rental.

And if those 50,000 tapes weren't enough, the Drafthouse is looking for more, and is taking donations of rare, out-of-print, and international titles for the American Genre Film Archive, its dedicated film preservation non-profit. If you've looking to clear some house space, and want to help its mission (in return for a tax deduction), email the team at DVDdonations@drafthouse.com.

The original Vulcan Video opened in 1985 and ever since was a significant film resource for the community and hub for the appreciation and discussion of film. Since we opened, Vulcan Video has been an incredible partner of Alamo Drafthouse Cinema. Our early pre-shows were 90% curated from there, they were a long-time sponsor and partner of Terror Tuesday, and they transformed Video Store Day into a major community event. Hell, at various stages, it seemed like half the staff did part-time shifts at both Alamo and Vulcan.

Allowing 35 years of thoughtful curation and love to be parceled off on Ebay would be a crime against humanity. Although it is sad to have a Video Store Day without Vulcan Video, we wanted to dedicate this Video Store Day to all those who worked at Vulcan over the last 35 years and share a little silver lining to an unusually crappy year.

If you want to continue the rabbit hole, I highly recommend the short film by Jimmy Kimmel and Matthew McConaughey, shot when the show was filming during SXSW. Intended to be a 30 second commercial, Kimmel was so enamored with Vulcan Video that he kept cameras rolling and brought Kristen, Bryan and the Vulcan Video story to the national stage.

Also, former Alamo programmer and preshow curator Lars Nilsen compiled a wonderful (and pretty emotional) series of exit interviews from the former clerks when they announced the closure of Vulcan South.

So, in closing, thank you to founder Dian Donnell, her family and all the tireless video store clerks for nurturing both the collection and the film-loving community over 35 years. We hope that this next chapter for the collection at the Alamo South Lamar continues to be an important resource for film-obsessed weirdos for many years to come.

You can drop off your videos starting tonight at Alamo South Lamar. Insert a slip of paper with your name and number inside the case and we’ll email you a code for a free rental at Alamo On Demand. If you’ve got a collection you’d like to donate, please let AGFA know via DVDdonations@drafthouse.com.

We’re currently building the ultimate free rental collection of Kung Fu movies for our Staten Island theater that will feature a museum of Kung Fu movie history at the Flying Guillotine bar. And we intend to keep opening free rental video stores in our communities as long as VCRs and DVD players exist on this planet.