Ever wonder where your milk comes from? Don't. Seriously. 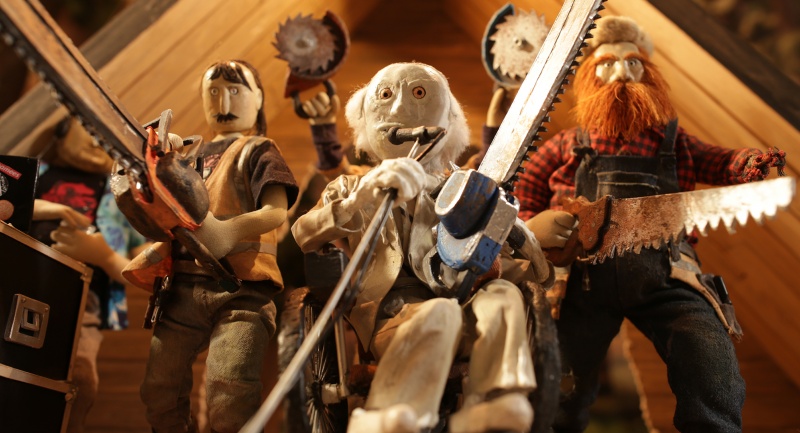 Children in cities, it is said, have become removed from the realities of where their food comes from. Good, says The Old Man Movie, because the last thing you need to know is how crazy farms are, and how gross everything about country life is. Just poop everywhere, and that's the least of the worries.

The Old Man Movie (or Vanamehe film in its original Estonian) is half Fritz the Cat, half Shawn the Sheep, a bawdy stop-motion delight that goes right up to the line of acceptable good taste, then stomps all over it with dung-covered boots.

Oskar Lehemaa, Writers Mikk Mägi and Peeter Ritso opened the barn door and first peeked in with a series of suitably disgusting shorts about a goofy old dairy farmer and the toothless imbeciles and surly bumpkins that fill his village. For the feature (directed by Mägi and Oskar Lehemaa), they pull the same trick as The Simpsons and South Park when they wanted to go over 22 minutes plus ads: throw in a good old-fashioned apocalypse. Or rather, a milkpocalypse. It turn out that cows will explode if not milked, and that happened before, turning one former teat-squeezer into a wheelchair-bound mass of milky goodness in human form, hellbent on wiping out every ursine udder before there's another big boom.

Not that the titular old man cares: his cow's milk flows free, and he's just received his grand children to help him out over the summer - much to their belligerent annoyance.

Gloriously unhinged and terrifically transgressive, The Old Man Movie relishes making the audience make a consistent "what did I just see?" face, taking increasingly wild and whacky turns - which is quite something, considering the villain is basically a block of cheese with bad intentions.

The tone can be a little uneven, with the lighthearted scatological humor occasionally interspersed with bloody violence (imagine if Elmer Fudd finally really shot Bugs Bunny - it's that sort of jarring), plus the stylistic decisions for the claymation are pretty roughly formed (a deliberate choice, to ensure that it matches the very successful shorts, if with bigger sets and more elaborate set pieces). Yet it's also fundamentally unique, and refreshing in its complete irreverence. So if bizarre encounters with bears, spitting old ladies, annoying music festival promoters getting their hipster comeuppance, plus a bizarre cameo by Jaagup Kreem (vocalist with Estonian metalheads Terminaator), and the year's wildest happy ending sound alluring, then this is one country excursion you won't want to miss.