Fantastic Fest Review: How To Deter A Robber 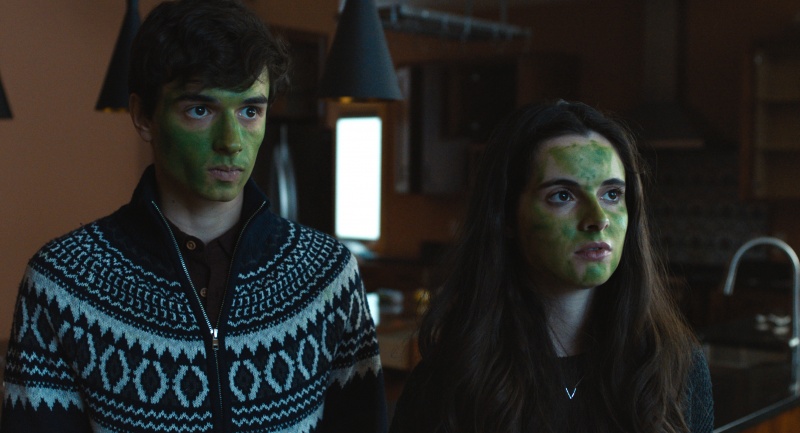 Combining the classic intrigue of minor home burglaries (a la Home Alone) with the relatable comedic drama of a teenager coming of age in the midst of college applications, first-loves, and mother-daughter arguments, How To Deter A Robber switches deftly between genres as it takes full advantage of its subject matter.

From playful Wes-Anderson type symmetrical closeup shots of a box of Kraft Mac & Cheese being prepared, to dramatic dolly shots of shadowy figures against wide windows, and a brilliant intro Christmas dinner fiasco sequence, the film takes what could have been a lowbrow thriller-comedy and turns it into a work of art.

First-time feature writer-director Maria Bissell created the project with her cinematographer and husband Stephen Tringalli. She wrote the screenplay specifically for the film’s setting - an isolated winter-cabin that her family owns and visited every year during her childhood, in northern Wisconsin. Much like in the film, the surrounding cabins in the town (Minocqua, Wisconsin) were owned by her cousins and family friends - who fed and hosted the crew during the film’s quick three-week winter shoot. Bissell has mentioned thinking frequently while growing up that the hidden basement trap door of the cabin would make a great set for a movie, and eventually went on to build an entire screenplay from the inspiration of that specific set piece.

It’s clear through Bissell’s witty lines, quick beats, and frequent incorporation of ad-libbed dialogue that the film makes a conscious choice to lean more into its comedic tone than its thriller side - though as the logline says, one person dies over the course of the film. Standouts include versatile, skillfully humorous performances from young stars Vanessa Marano (Switched at Birth) as Madison and Benjamin Papac (Greenhouse Academy) as her boyfriend, Jimmy, and a heartwarming appearance from genre-veteran Chris Mukley (Twin Peaks) himself, as well as a uniquely true-to-life mother-daughter dynamic. Some of the most electric scenes are those between Madison and her mother (Gabrielle Carteris), in which they argue about Madison’s college essay and general lack of direction in life. “You’re both fighting yourself when a mother and daughter fight” Bissell said during the post-screening Q&A about the scenes, inspired by real-life arguments with her own mother at that age, pieced together from her diary entries from the time.

For a film that revolves mainly around the exploration of holiday home burglary, Bissell made a conscious effort to never become cartoonish in humor, instead imbuing each scene with a more realistic thorough-line - a first love falling apart, the bond one has to one’s family, the uncertain future of a high school graduate, and the concept of staying in a toxic relationship out of familiarity. Both robbers are remarkably humanized, with Abbie Cobb’s portrayal of the female burglar being one of the funniest and most trope-defying performances in the film. Though not every joke hits, and the film’s conclusion falls off a bit after the climax, How To Deter a Robber is an admirable feature debut from Bissell and Tringali, and a valuable contribution to the sub-genre of holiday home-burglary movies.

How To Deter a Robber
World premiere

Don't miss our interview with writer/director Maria Bissell, How to Deter a Robber ... Politely," Sept. 25.