Canadian werewolf tale finds the monster within the artist 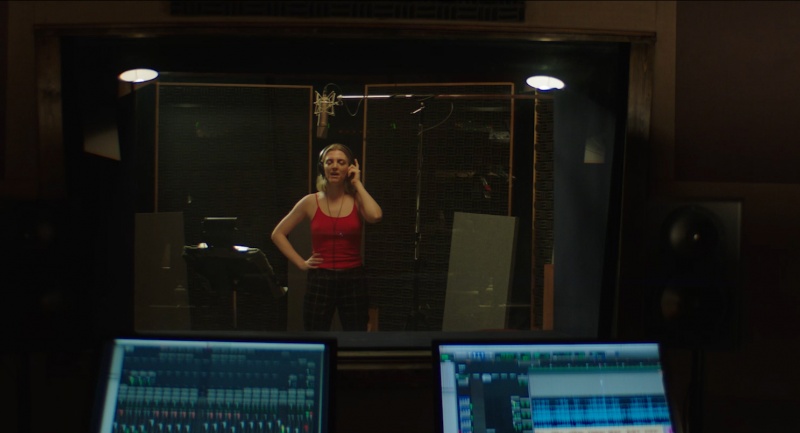 Nowadays it’s often difficult to tell how much of a horror film’s details are computer generated, or whether your favorite monster is simply the product of a greenscreen and CGI effects. Not so with Amelia Moses’ Bloodthirsty.

It marks a stylistic return to this pre-internet age of physical horror, reminiscent of earlier furry flicks like An American Werewolf in London and The Howling featuring purely palpable werewolf costuming, makeup, and props, complete with an abundance of real-fake blood and guts.

A modern, female spin on the historical werewolf horror genre, Bloodthirsty's world premiere closed out Fantastic Fest on Thursday evening, during the aptly-timed first full moon of October. The film differs from most stereotypical werewolf films in that it focuses on the transformative journey of a female queer pop star, positioning the intimacy and introspection of songwriting as a central lens through which the legend of werewolves can be explored in a new way.

Grey (Canadian actress Lauren Beatty who also starred in Moses’ last film, Bleed With Me) is a newly successful pop artist who suffers from frequent nightmarish hallucinations. She visits an isolated mansion in the Canadian forest with her loyal girlfriend, Charlie (Katharine King So), to produce her second album at the invitation of an older producer, Vaughn (Greg Bryk) whose musical genius is overshadowed only by his infamous past murder trial.

Both Beatty and King So identify as active members of Canada’s LGBTQIA+ film community, and first became interested in the project primarily because of its positive representation of queer women in a genre space that typically doesn’t allow for non-male, non-straight werewolves.

The project’s screenwriter, Wendy Hill-Tout, was inspired to write the horror flick by her daughter (LGBTQIA+ pop artist Lowell, who also cowrote the original songs for the film). She originally conceived Bloodthirsty as a ghost story centered around the intimate experience of collaborative songwriters. The film quickly evolved into a gory genre-indulgent werewolf flick, whilst incorporating all of those intimate details surrounding the songwriting craft and the mental pressures of creative success, as well as the eternal monster-love-dilemma of fearing you may hurt those close to you.

Sound design is critical to the film’s plot and character development, with each transformative moment of Grey’s journey to werewolfdom being marked by an artfully constructed soundscape. Heavy breathwork, layered audio flashbacks, original songs written specifically for the film (mainly by Lowell), and a skillfully-designed score by Michelle Osis are all incorporated. In fact, the film begins with a long audio sequence of Grey breathing through a hallucinogenic nightmare - the violent squelch of flesh tearing and blood smacking lips overwhelming one’s senses immediately, laid over a dark screen while preliminary credits flash.

This focus on audio carries through the entire film, with the increasingly horrific sequences and evolution of Grey’s songwriting subject-matter mirroring each other. Although a few areas of the plot could have been fleshed (no pun intended) out a bit more and the dialogue and actors’ chemistry felt slightly stiff at times, Bloodthirsty is guaranteed to be unlike any werewolf horror film you’ve ever seen.

Don't miss our interview with director Amelia Moses The Creatures of the Night Make Beautiful Music in Bloodthirsty," Sept. 24.