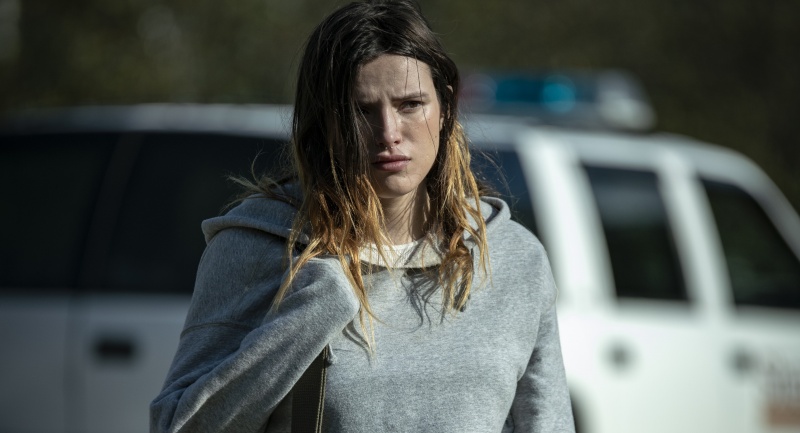 Bella Thorne as the vengeance-fueled protagonist in Girl, debuting at Fantastic Fest this week

Homecomings can be strange affairs. Chad Faust - writer, star, and director of Fantastic Fest thriller Girl, knows that first hand. He and his wife spent much of the beginning of the coronavirus living an unexpectedly nomadic life, spending time in England and Scotland, and on the Greek island of Crete.

Now he's back home just in time for the premiere of his new film Girl - the story of a nameless young woman (Bella Thorne) who returns to her family home town on a bloody mission of revenge against the father who abandoned her. "It's so weird to be back here," he said - a sentiment with which the titular antihero could sympathize.

The journey to this premiere has been a long one: nine years of Faust working through a deeply personal story. "It feels like this bastard child that finally came to light," he said. He called the story "emotionally autobiographical. ... It started with me wrestling with my relationship with my mom. I hadn't seen her in 15 years and [the film] came out of this imagination of, what if I had been a young woman raised by my mom instead of a boy raised by my father?"

Fortunately, that relationship with his mother has changes and improved. "I feel kind of bad because now this movie's coming out, but I've been very honest with her that this was my therapy, trying to understand how I built a life based on a story. That was the idea that I wanted to explore in the film: What happens if you build a life on a false story, and one day that story gets turned upside down, and you realize that there's another option - which is the truth."

It was such an intimate and personal story that knew he wanted to direct it - the first of three features (alongside another small-town drama, The Sun Dies in the West, and TV movie Impact Generation) that the Lone Star and The 4400 star is overseeing from the director's chair. He said, "I've been writing for so long, I have so many scripts, and some I'm set to direct, others I'm not. It's always a discovery to work out which I'm going to see through, and part of what I've discovered is that, with these ones that are so personal, there has to be so much trust. You're giving to a birth and saying, 'Great, now go raise my baby.' Even if I'm producing, I'm basically overseeing the person fathering or mothering my child, and that's difficult, to really choose that partnerships carefully. With this one, I knew I had to do it because it was so personal. Basically, if someone was going to screw it up, it's gonna be me. I'm the only one who can destroy this one."

Austin Chronicle: The underlying theme here is of unresolved emotion. That one word, unresolved, is what drives so much of the story.

Chad Faust: My intention with the film was to suture the audience into her subjective experience. That's why none of the characters have names, why everyone is archetypal in the beginning, and slowly we discover that these people are much more complex than we thought, and often the opposite of what we think them to be. That way, the audience has the same experience that she's going through, that we think we understand everything in black-and-white terms, and slowly everything becomes technicolor. Then you actually have to navigate reality.

What I was trying to address was the narratives that we live, and how we think them to be so simple, only to discover them to be far more complex as we mature. That drove every choice I made, even as a far as casting and production design, and how she sees people, and how does that perception change and grow.

“I told Bella, look, you understand this character far more than I do, and I’m so sorry for that, but let’s just bring who you are to this. My job wasn’t to build a character with her, but to give her full permission to bleed, sweat, and cry.” - Girl writer/director Chad Faust on working with Bella Thorne
AC: This definitely has a noir edge about it, and that's a genre that has been described as bad people doing bad things for good reasons. That definitely applies to your lead character, whose instincts at the beginning can be pretty rotten.

CF: Some people have called this a revenge film, but I think that's completely inaccurate. I think it's an anti-revenge film. It's showing the dangers of living your life based on this idea that if you hurt the people who hurt you, somehow your pain will be justified. There are so many films that glorify what feels like justice, but there's a line towards the end of the film that the only good revenge is living a good life - and even that's too simplistic. The only real revenge is being the first to love, being the first to forgive. But that alone doesn't make for a good story, so you have to go through all the mud, all the darkness to get there.

AC: This isn't necessarily the kind of film people would expect from Bella Thorne.

CF: As I cast this film, I had to keep adjusting what it was. With a different cast, it would have been much more heightened, but as soon as Bella came on and Mickey (Rourke), these characters weren't so far from the actors that I had cast. I told Bella, look, you understand this character far more than I do, and I'm so sorry for that, but let's just bring who you are to this. My job wasn't to build a character with her, but to give her full permission to bleed, sweat, and cry.

AC: You were already writing and directing, so what made you want to play the part of Charmer as well?

CF: In some ways he's a cautionary tale of the danger of when you have a superpower like charm, and that's the only skill you've ever been applauded for. You lean on it heavily, and it becomes all you are. You become shallow beneath that façade. I've been around Hollywood long enough to know that's a very dangerous recipe for one's character.

I knew exactly where I wanted that character to go, and I was able to direct the scenes from the inside of them. When you're inside the temp of the dialog you can steer things at the DNA level. But I was so concerned that that character would get played as purely obnoxious, purely a sociopath. I wanted him to be someone who was sociopathic, but not without self-awareness. He was someone who thought he was the smartest person in the room at all times, but caring at moments. I wanted him to be as complex a person as I could possibly portray.

AC: And the town itself is this place where sin has pushed all the good out. That's very cinematic, but it's also reminiscent of these kind of small towns that you drive through and you wonder how they hang on.

CF: I'm an outsider to this country - I emigrated here from Canada about 17 years ago - and I've always been so fascinated with the beauty and horror of these small American towns. There's a poetry to them. You stop in them, and it's like the movie U-Turn: you have preconceptions of how it's going to be, and then you meet some really beautiful people. That's been my experience, that you stop and judge it by its cover, but you go into the bar and you discover, there's beating hearts here, there're backstories to the pain.

This started as a Southern town, but as I embraced my Canadian passport and the incentives to go up there increased, it became less Southern and more Northern. I'm from British Columbia, and we shot this is Ontario, but I'd spent time way up in the north, in the Arctic, in some of these really compromised communities, living in the wake of residential schools, and I really wanted to honor the people I had met in these places. You arrive in a place with high abuse rates, and alcoholism, and you realize, man, there's a reason for this pain. There's a brokenness that these people didn't bring upon themselves. There's some outer horror that stepped into these villages.