Fantastic Fest Returns to Celebrate Itself 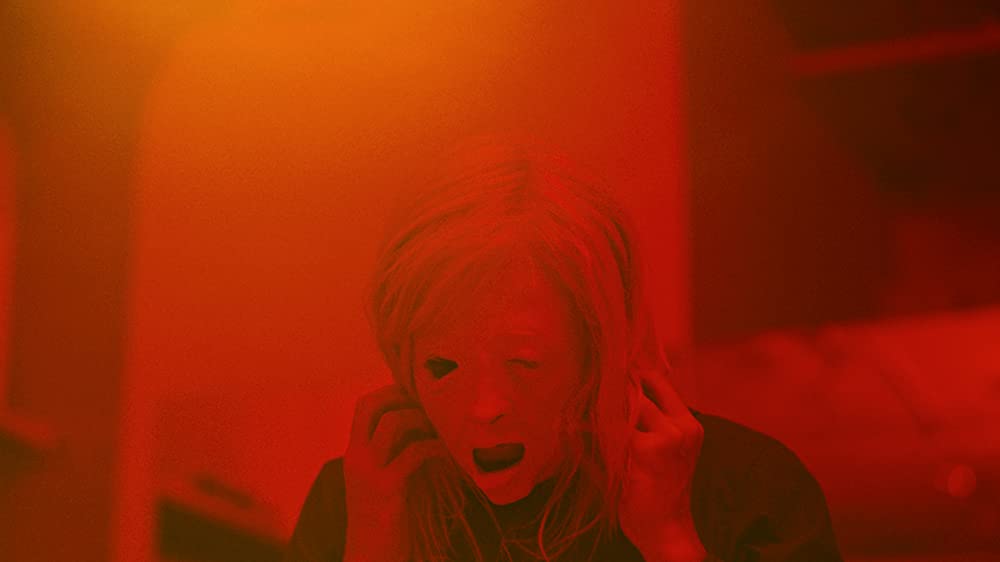 Possessor, the opening night film for the online Celebration of Fantastic Fest
Fantastic Fest may be taking a year off due to the coronavirus lockdown, but that's just the in-person gathering. The local celebration of oddball, innovative, and international cinema has just announced a week-long streaming extravaganza, all for free, including multiple world premieres, running Sept. 24 to Oct. 1.

The Alamo Drafthouse's annual genre festival was forced to announce the cancellation of its 16th iteration back in July. Unlike many other festivals, they decided not to make the jump to being a full virtual festival but instead promised there would be a streaming celebration of Fantastic Fest.

Well, the last three months have seen them quietly work to fulfill that promise with today's announcement of what, for most events, would count as a full festival. Twelve features, three restorations, four full slates of shorts (including the return of beloved animation segment "Drawn and Quartered" for the first time since 2014).

Best of all, the entire program of new features and shorts will be free to US residents during the fest as timed streaming events via the Drafthouse's Alamo On Demand, while the restorations will be available at a discounted rate. Details will be available of how to sign up at www.fantasticfest.com.

The programming reflects the festival's notoriously eclectic tastes, with festival favorites like Estonian oddity The Old Man Movie; returning names, like filmmaker Jill Gevargizian who brings the feature version of her 2016 FF smash short, The Stylist, for its world premiere; and rising talents liked director Amelia Moses, who turned heads at the Canadian Fantasia International Film Festival with her last film Bleed With Me, and now brings her followup, Bloodthirsty, to Fantastic Fest for its global debut.

Meanwhile, there will be a local component with a Alamo connection: Actor/dentist George Hardy starred in the infamous Troll 2, which was the slackjawed subject of Best Worst Movie, which both featured and debuted at the Alamo Drafthouse. Hardy then went on to star in Austin transplant Tyler Russell's small town noir Texas Cotton. Now all those threads come together with Hardy and Russell's latest collaboration, gory comedy Cyst. UPDATE: Cyst will no longer be screening as part of the festival. Director Tyler Russell emailed the Chronicle to explain that he is still working on the film, but he plans for it to play at other festivals later.

Plus, if you happen to live in Austin, there will be two special theatrical screenings, both Texas premieres: Brandon Cronenberg’s eagerly-awaited Possessor opens up the celebration on Sept. 23, while indie supertalent Jim Cummings (Thunder Road) brings The Wolf of Snow Hollow) to town on Oct. 8.

Fantastic Fest programmer Logan Taylor explained, “Despite the many hardships 2020 has thrown our way, the Fantastic Fest team knew we needed to stick to our mission of celebrating and championing genre films from bold, diverse voices - new filmmakers and treasured alumni alike. While we have a much smaller selection than in previous years, we’re delighted to showcase 15 films that express our brand loudly and proudly.”

Of course, Fantastic Fest isn't really Fantastic Fest without the parties and events, and the team has managed to make the virtual jump for such mainstays as Master Pancake (making a retro leap-back for one of their first movie roasts, Invasion of the Bee Girls), the annual Fantastic Feud, the return of 100 Best Kills, and a first look at the latest title from Mondo Games, King of Movies: The Leonard Maltin Game Challenge.

On top of all that, there will also be a selection of virtual escape rooms, curated by Cara Mandel (Story Experience Producer for indie arts juggernaut Meow Wolf) and Rachel Walker, Head of Programming & Creative, Drafthouse LA. Mandel said, "As someone who was on track to completing 120 physical escape rooms, I was initially skeptical of how this beloved artform could be adapted to virtual play. But I can now confidently say that these remote escape rooms are emerging as an exciting new artform unto itself. It has opened up this world to players internationally and is proving that innovative creators will thrive in any format. I'm so excited to be able to shine a spotlight on just a handful of the many wonderful online experiences available right now."

A Celebration of Fantastic Fest will run Sept. 24-Oct. 1: details at www.fantasticfest.com. Now here's that full lineup of features, shorts, events, and more ...

Secret Screening
World Premiere of the 4K Restoration A special re-discovery of an explosive, death-defying, bullet-riddled, grenade-launching, flame-broiled, anti-human megattack. Free to view during the live secret screening and available for Virtual Cinema rental on Alamo On Demand afterwards.

Bloodthirsty
D: Amelia Moses
Canada, 2020, World Premiere, 82 min
When indie singer Grey struggles to write her sophomore album, she teams up with a mysterious producer at his secluded cabin. Though their bond strengthens her music, it also starts to irreparably alter Grey’s body and mind.

The Boy Behind the Door
D: David Charbonier & Justin Powell
USA, 2020, World Premiere, 88 min
After Bobby and his best friend Kevin are kidnapped and taken to a strange house in the middle of nowhere, Bobby manages to escape. But as he starts to make a break for it, he hears Kevin’s screams for help and realizes he can’t leave his friend behind.

Daughters of Darkness
D: Harry Kümel
Belgium/France/West Germany, 1971 World Premiere of the 4K Restoration from Blue Underground, 87 min
The classic lesbian vampire tale reignites the screen as the lives of a young newlywed couple take a dramatically sexy turn after their paths cross with Elizabeth Báthory in a deserted Belgian hotel.
Special Event: An interview with director Harry Kümel, moderated by Kat Ellinger.

Girl
D: Chad Faust
USA, 2020, US Premiere, 92 min When Girl (Bella Thorne) sets out to a no-name small town to track down her deadbeat father, she finds herself wrapped up in a situation far more dangerous and twisted than she expected.

How to Deter a Robber

How To Deter A Robber
D: Maria Bissell
USA, 2020, World Premiere, 81 min
Two teens playing amateur detectives get more than they bargained for when they investigate the wrong cabin in this darkly comedic romp.

The Queen of Black Magic
D: Kimo Stamboel
Indonesia, 2019, North American Premiere, 99 min
Childhood friends Hanif, Jefri, and Anton take their families on a trip to the orphanage where they grew up to pay their final respects to the man who raised them. But they’ll soon discover that the secrets from their past refuse to stay buried.

The Stylist
D: Jill Gevargizian
USA, 2020, World Premiere, 105 min
Few things in life hold more promise than a new hairstyle. But the women who visit stylist Claire’s chair get more than they bargained for, bringing a whole new meaning to the phrase “extreme makeover” in Jill Gevargizian’s first feature film, based on her acclaimed 2016 short.

A celebration of some of the year’s most fantastic short film offerings, spanning a myriad of genres and sensibilities.

A parade of short-form horror in all its permutations, from “Boo!” to “Eww!”

The experimental and the esoteric; shorts that upset conventions and defy expectations.

Master Pancake: Invasion of the Bee Girls
D: Denis Sanders
USA, 1973
To celebrate the 20th anniversary of Master Pancake, John Erler, Owen Egerton and friends are revising one of the very first films they ever roasted back in the year 2000.

100 Best Kills: Decapattack!
FF’s life-defying clip show returns from the grave with a dazzling onslaughter of the 100 finest decapitations in the nation!

Fantastic Fest Triviadome
The Drafthouse's beloved movie trivia night returns just for Fantastic Fest! Start coming up with your clever team name now and study up! Featuring a round in honor of Fantastic Fest tradition Nerd Rap, written and performed by superstars of years past.

King of Movies: The Leonard Maltin Game Challenge
Beat the Hollywood screenwriters and win glory and an exclusive Mondo Prize Pack! Enter to play against a trio of Fantastic Fest Favorite writers in Mondo’s brand new game King of Movies.

Evil Dead 2 Remote Escape Room
Created by Hourglass Escapes (Washington)
Synopsis: You get a strange email from your paranormal investigation group “Gnostic Research of the Occult, Omens, Vampires, and Yetis” aka G.R.O.O.V.Y. Seems your leader decided to break into the old Knowby cabin and can’t escape...You and your team must guide him via his ghost gear technology through this misadventure so he can escape and find a way return the evil dead to their realm and escape before the cabin is sucked into the time-space vortex forever.

The Truth About Edith
Created by Mad Genius Escape Rooms (Oregon)
Synopsis: You may recognize Edith Humphreys, your sweet neighbor with 24 cats. You may have even helped her out, snooped around her apartment. But there's something about Edith that doesn't quite add up... she looks way younger than she is, she says she was born in 1902 but that she's 97 years young... and she lives at a business called Mad Genius Escapes?! What is going on here... The Truth About Edith is an hour-long, cooperative, timed adventure sprinkled with interactive theater and a good dose of humor! This game is an eccentric mix of a video game, an escape room, and a great who-done-it story.

Exorcist Online
Created by: Emergency Exits (Manchester, UK)
Synopsis: Exorcist Online will take you deep into the history of Crowley manor which was last owned by the infamous Aleister Crowley. You will join your tour guide via remote feed and control them on this haunted adventure. The real excitement is the history of Crowley's mysteries and puzzles. This house has been famous throughout history as there have been many disappearances over the years. It is said that Aleister Crowley is still trying to trick and trap his victims from beyond the Grave. Enjoy the tour but DO NOT out-stay your welcome.

Project Avatar
Created by Legendary Quest (Ukraine)
Synopsis: Avatar is a traveler of worlds, whose vocation is to maintain a balance of good and evil on earth. Having traveled into a parallel realm, Avatar needs help from the support team (you!) to complete the mission and survive! This fascinating interactive live- action race against the clock is stylized as a video game, complete with cut scenes and a HUD, reminiscent of titles like Duke Nukem, Half Life and Tomb Raider. Players use voice commands to navigate the hero across a 2000 square foot warehouse, and complete tasks that appear along the way. Non-linear gameplay allows for over 100 different variations of adventure.

Pursuit of the Assassin Artist
Created by: Om Escape (California)
Synopsis: In Pursuit of the Assassin Artist, you will be teaming up with a secret agent to discover the secrets of the world-famous modern artist. A live-action room created just for the virtual space, Pursuit employs a unique function of your character being able to die and come back to life with all the knowledge acquired previously. This allows for unpredictable gameplay, keeping both your team and the live actors on their toes. Filled with innovative puzzles and easter eggs that win you achievements, this brand new room is a shining example of how to create a truly immersive experience for a virtual audience.