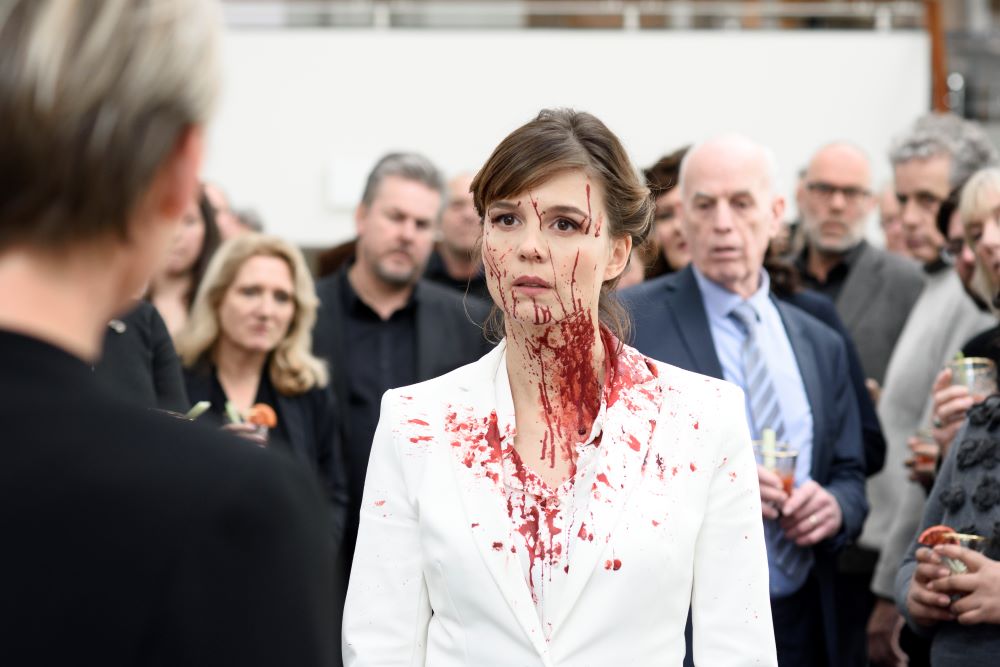 Opinions, the saying goes, are like assholes. They're everywhere. The question at the heart of social media satire The Columnist, an attack on our confrontational online culture.

Femke (Katja Herbers) is the titular columnist. She's been getting the wrong kind of attention for an op ed she wrote suggesting that the Netherlands should put the Christmas tradition of Black Peter (and its concomitant displays of blackface) in the past. The internet trolls don't like that, and send her every imaginable and predictable slur and insult. Everyone tells her to ignore the abuse, but that's what every woman is told when she's facing online abuse from anonymous men. Only one isn't so anonymous: she works out it's her irksome neighbor. And so what if, one day, he happens to take a spill off his roof. All it took was a little shove, but that's not enough to clean up the internet, and so the seemingly genteel Femke goes off on a vigilante spree.

The biting and scathing script by Daan Windhorst doesn't just take more-than-deserved stabs at troll culture, but also a broader swipe about the very real perils of social media addiction. Those surrounding Femke constantly advise her, just delete your account and get off Twitter, it's not real life - everything you've probably heard yourself when you've got caught in a doomscrolling exchange with some bot in Minsk. But she just cannot stop, just hiding her addiction to conflict from her teen daughter, Anna (Claire Porro), a free speech absolutist whose favorite hobby is annoying her headmaster, and her new boyfriend, Steven Dood (Bram van der Kelen), a crime novelist with a devilish look and a homemaker's heart.

What the script deftly avoids is, at any level, saying that this is her fault. If the trolls hadn't dismantled what she sees as polite society, she wouldn't need to get so nifty with a shotgun. At the same time, there's more at stake than just her fury and fear over some degenerates with a bad case of limp dick energy (just watch for the fingers, a recurrent motif). Much like Russell Crowe in Unhinged (although he's a clear villain), the peril is in crossing her path. Is her indiscriminate rage, Windhorst asks, really more defensible than their snide, powerless threats?

Yet there's content and context missing in the construction of Femke as a writer, and especially as a columnist. There's a lot of tell and not so much show, so a little context is lost. Is she an affable note-taker, or a blazing controversialist? Not that it should matter - and maybe that's Windhorst's point. However, in an age of morality tales, this (again, like Unhinged) is more of a cautionary one. Maybe we all need to pull back on the doomscrolling.

The Columnist is screening as part of the Fantasia International Film Festival in Montreal, Quebec, Aug. 20-Sept. 2, www.fantasiafestival.com.