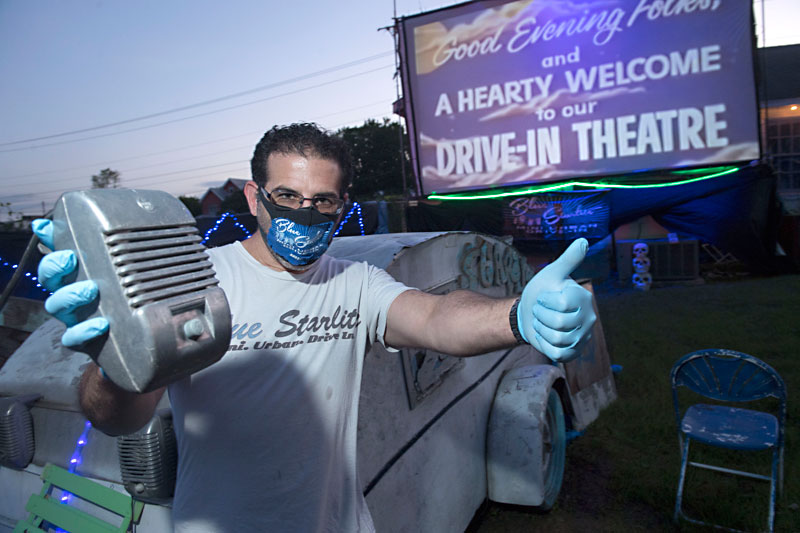 There's a new cinema opening in Downtown Austin, and you don't even have to pick a seat for social distancing. The Blue Starlite Mini Urban Drive-In, the Downtown Austin Alliance Foundation have come together to create a unique screening space in the heart of the city - and they're bringing the opera with them.

The new screen will be on the top floor of the State of Texas parking garage at Third and San Antonio. The outdoor screenings will run, Wednesday to Friday, from Aug. 28 through to the end of October.

The programming will reflect the Starlite's established reputation for repertory screenings, with Cloudy With a Side of Meatballs and The Breakfast Club lined up, plus new releases like the upcoming Stuntwomen: The Untold Hollywood Story. Yet what's really going to distinguish this new site from the other locations is music - both concert features and live streams. The biggest news locally is that Austin Opera, through its Opera ATX Initiative, is filing a series of operas and original concerts, starting in October with Winter Journey.

Originally scheduled for live performances in April at the Austin Central Library, but canceled due to the coronavirus pandemic, the company will stage it for the screen at the Indy Terrace rehearsal studio. It will open a season that will also include a new production of La voix humane, and a 60-minute performance by married duo Lauren Snouffer and Mark Diamond.

The announcement comes just as the Blue Starlite celebrates its 10th anniversary, and it's a return to Downtown for the outside cinema institution. It originally opened on a back lot on East Cesar Chavez, before moving out to East Sixth in 2011. That location only lasted a couple of years before that site was developed, and the Starlite had to move again - first to the Austin Studios backlot, then its current home at Mueller before adding a second location in Round Rock.

For owner/operator Josh Frank, the new Third Street location brings back something he’s missed since the Sixth Street Days – a spectacular view of the skyline. He explained, “For many years, we have had a vision of a rooftop Blue Starlite in the heart of downtown Austin. Thanks to the enthusiasm and support of the Downtown Austin Alliance Foundation, and their diligence in tracking down the perfect space, we are thrilled to be able to manifest our vision in solidarity with other local businesses.”

Right from the beginning of the coronavirus lockdown, Frank has been looking for ways to work with local restaurants. With the new location, he’s establishing partnerships with businesses, whereby patrons will either be able to pick up their order before arriving, or have them delivered to their car – all using the social distancing ettiquettes and protocols that the Starlite has spent the last five months finessing at the Mueller and Round Rock locations. Molly Alexander, executive director of the Downtown Austin Alliance Foundation, said. “At a time when we are all doing our part to keep our community protected, this offers an opportunity to get out of the house to enjoy a movie, live music or a theater production in a safe way.”

Adding the music is a particular joy for Frank, who already authored a book on the Pixies, Fool the World: The Oral History of a Band Called Pixie. The drive-in is already arranging a special event with Sebadoah frontman Lou Barlow called Live at Home, plus DAA nights and SIMS Austin music showcases. As for the opera, that's in his family - literally, as his mother studied opera at UT and performed with Houston Grand Opera. “Blue Starlite and Austin Opera are both striving to provide discerning Austin audiences with a unique communal live experience,” says Frank. “I’m excited to add opera to the rich mix of programming here at the Blue Starlite.”

Tickets for the new location will go on sale at www.bluestarlitedrivein.com/downtown.