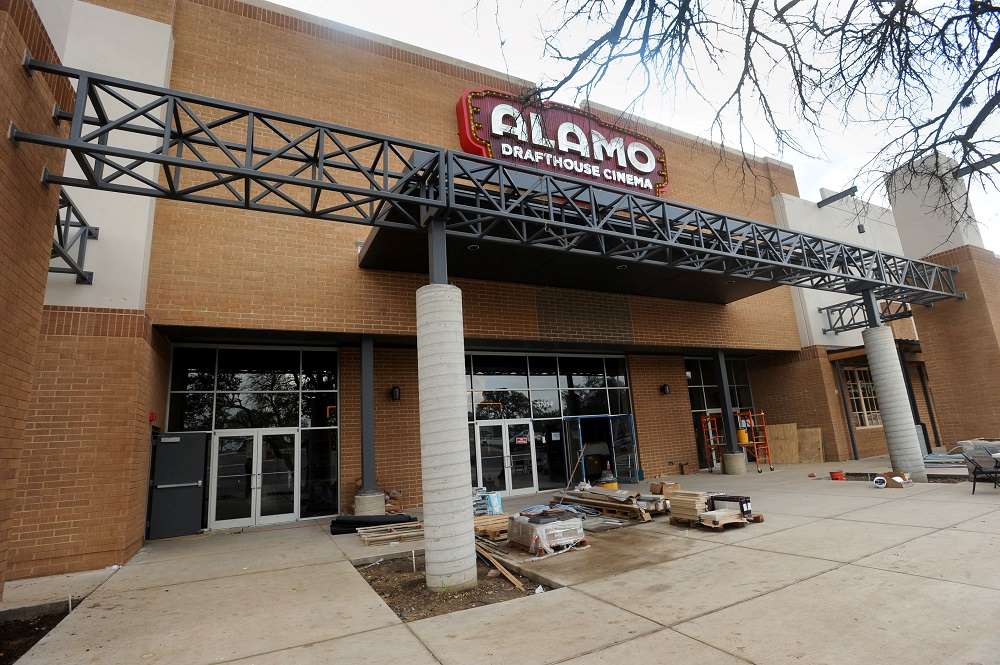 Coming soon, again: The Alamo Drafthouse Slaughter Lane (pictured during construction in 2012) is reopening this weekend. (Photo by John Anderson)

Since mid-March, the majority of Austin's cinema screens have been dark, but now they'll be getting a lot brighter with the announcement that the Alamo Drafthouse Slaughter Lane will be one of a number of theatres reopening this weekend.

Across the summer, cinemagoers and movie lovers who wanted to get out of the house had to choose between either outdoor screenings at Blue Starlite Mini Urban Drive-In and Doc's Drive In theatres, or the handful of smaller cinemas that had opened their doors under strict hygiene protocols, such as IPIC and EVO Belterra.

This weekend will see the chains start to get more serious about reopening, with AMC Barton Creek, Cinemark Southpark Meadows, and Regal Gateway and Regal Westgate all resuming programming. Now add the Alamo Slaughter Lane to the list as the locally-based chain begins a rolling reopening program. The opening weekend lineup includes new releases Unhinged, Train to Busan Presents: Peninsula, and Cut Throat City, plus retrospective anniversary screenings of Star Wars Episode V: The Empire Strikes Back, and Inception.

In an echo of AMC's decision to attract customers back with 15 cent ticketing on opening day, the Alamo is offering free tickets for Bill & Ted Face the Music, the third film in the popular Bill & Ted franchise starring Keanu Reeves and Alex Winter, for preview night screenings on Wed., Aug. 26.

Slaughter Lane is the first Austin location to reopen, with others around the country to be confirmed. Expect other local sites to follow suite. However, the Drafthouse confirmed that it will continue to offer its Alamo on Demand service, as that was not a response to the pandemic but a new expansion of their portfolio.

The reopening comes at a tough time for the Drafthouse, after The Pitch published an article about systemic issues in their Kansas City location, one that has caused concern among some of their most loyal customers. It also comes after another recent round of furloughs of senior and long-term staff.

However, the chain seems to be trying to pick up where it left off in March. Obviously, there will be the big upcoming releases: the long-delayed The New Mutants, Christopher Nolan's Tenet, and an exclusive engagement of Bill & Ted Face the Music. Alamo Drafthouse CEO Shelli Taylor said these films "are made for the big screen experience. We’ve all dearly missed going to the movies, and with our many enhanced safety protocols we feel that we can come together again confidently and securely.”

The Drafthouse also announced specialty programming, with two new strands: Making Up For Lost Time, with screenings of Inception, Back to the Future I and II, Bill & Ted's Excellent Adventure, Donnie Darko, and Edge of Tomorrow; and the quasi-ironic Masks!, where the facial coverings of the protagonists (from Batman to Hannibal Lecter) are as memorable as the action.

Speaking of masks, they're also reminding patrons to stick by their new hygiene and social distancing rules: and if you don't have time to read the how-to, or you're more of a visual learner, they've even animated a video how-to guide.

Find more details at www.drafthouse.com/austin. Now, here's the teaser for the Making Up For Lost Time series: