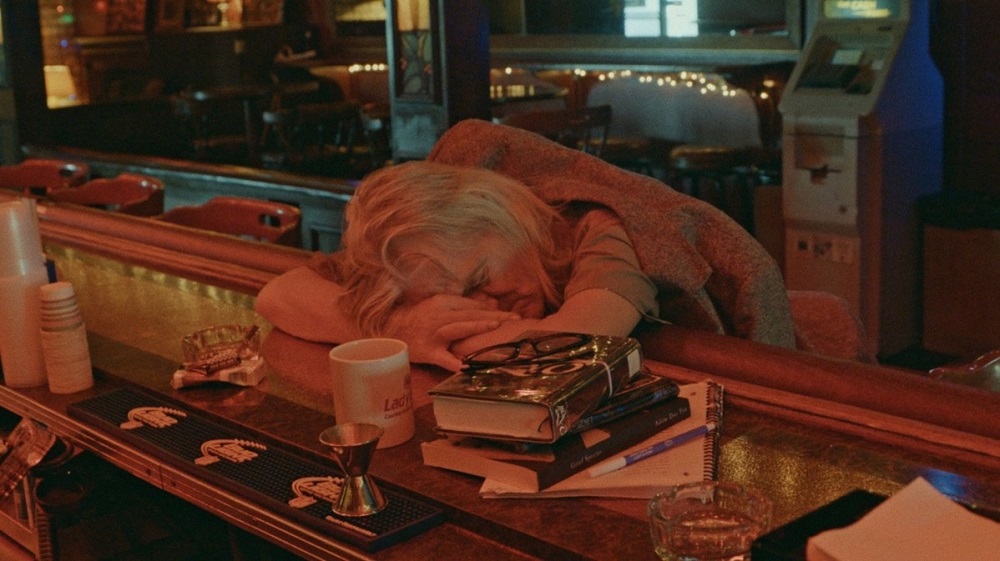 France has the cafe. Britain, the pub. But there's something uniquely American - even Americana - about the dive bar. It's so unique yet universal that filmmakers Bill Ross IV and Turner Ross were able to span a the country to make their film, yet never make it feel like they left the seat.

The long-time award-winning documentarian duo moved into the dramatic space with Bloody Nose, Empty Pockets, their new, semi-improvized story of the very last call as a diver bar on the edges of Las Vegas. It may not be much, but for the drinkers and staff it's something like home and family, the last root to hold on to on the edge of their crumbling cliff. Bill called those hinterland outskirts "fascinating. ... People either trying to break into Vegas or that have fallen out. The real life that exists on the fringes of this fake city speaks to our American excess."

The film may be set in Las Vegas, but the interiors were filmed in their home town of New Orleans - or rather, just across the Mississippi at the real-life Roaring 20s, a bar in Terrytown. The decision wasn't one they made just so they could work from home. "We scouted every bar on the outskirts of Vegas," Bill said, but none were quite right. "We'd find places that looked right, but nothing was perfect until we walked into the Roaring 20s, which is right here in Terrytown. We figured we could do just as well here, and then fly everybody out to Vegas for the exteriors."

“It could have all fallen to shit, but that was the excitement, that was the fear that we had that we always try to impose. If we’re not afraid, then there’s probably not anything interesting happening.”
That fits, considering the story is of a bar that is both nowhere and everywhere. Turner said, "We'd been thinking about different iterations of these themes and this project for a decade, and eventually arrived in a place where we knew we had the architecture of the setting, the primary metaphor that we wanted it to exist in." The key development was their 2016 concert documentary with David Byrne, Contemporary Color, "which was to make a movie within four walls, to have imposed narratives in a manufactured setting where we could be present for the experience." It was the combination of control and happenstance that appealed to the duo, who made their reputation in freeform, immersive documentaries like Tchoupitoulas, Western and 45365 - all, like Bloody Nose, depictions of whole communities. Pulling the experience inside the walls of Roaring 20s gave them the ability to guide the narrative "while allowing for the act of discovery, which is always so important to what we do," Turner said. "There was some real life breathing through it, not just some dead, scripted narrative."

While they could have shot anywhere with a dive bar (and therefore anywhere) there was something specific about Las Vegas that appealed to the siblings. Not the tourist distractions on the Strip or Fremont Street, or even the ever-growing suburbs, but the outskirts. The places were the glow of the casinos fades into the orange fizzle of street lights, and the whir of slot machines is drowned out by the engine noise from tired tourists trying to find the I-15 on-ramp. This isn't the Vegas you go to. It's the Vegas where you end up. For Turner, the bar as last redoubt for those on the periphery of Sin City becomes "the grand metaphor of this oasis in the desert, and then people seeking an oasis within an oasis."

"We were pulling people from our own lives, people we had met along the way," Bill said, "and that was probably a third of the cast, and the rest of was going from bar to bar, talking to people both here in New Orleans and in Vegas." That barhopping went on for a couple of months, with dozens of casting sessions that would both help find potential performers, but also sketch out the archetypes that haunt and inhabit these beloved holes in walls, making them all unique and yet unified. "We would just go in, set our camera on the bar top, and if people were willing to talk to us, we'd talk."

Having built their careers as documentarians, Turner offered, "Certainly it is an evolution of where we've come from." He compared their creative process "to mining natural resources. We go out into the world and find these curios, and spend time with them, and see what magic floats to the surface. We understand a bit of how the dynamics of a space like this work, and we know what kind of people we need to fill the space with so they would create dynamic scenarios so we had an idea what to look for." Most importantly, he said, "We knew we had to build a conducive environment. Set, setting, the people within it, when they come, when they go, what's going on in the room, and then lighting the match."

"It could have all fallen to shit," Turner said, "but that was the excitement, that was the fear that we had that we always try to impose. If we're not afraid, then there's probably not anything interesting happening."

“[Michael Martin], through his actions, was dictating the tone of the room. He really was our inside man.”
Yet in this they faces the perpetual tension for a director of how much to influence the action. In physics, it's called the observer effect, that simply by being present a scientist will affect the outcome of an experiment. In this case, they created the scenario, populated it, but the simple act of being in that space with a camera they would be a factor on the set, and for the non-actors they had cast. In fact, there are only two actors with IMDB pages with other credits. First, there's Shay Walker, who plays one of the bar staff (although, as the brothers noted, they hired her because they were so impressed seeing her audition tape for their friend Benh Zietlin's adaptation of Peter Pan, Wendy, which was in production at the same time). However, by far the most experienced performer was Michael Martin, both on-screen and as a lauded veteran of the New Orleans stage. "Michael, through his actions, was dictating the tone of the room. He really was our inside man." "He's the most fascinating thing to me," added Bill. "We'd had conversations ahead of time about our intentions, and for him, he prepared as an actor. We cited our references, and talked through things that he knew and we knew, and talked through what kind of role he would play. Then to watch him, in real time, go through the process of inhabiting the character that he thought wanted to live within there, and then his own person within that space interacting with primarily with non-actors in a way that could go any direction, and just watching that machinery work in his mind, and the dynamics of the room change his perception of what his role was, was eternally fascinating." Bloody Nose, Empty Pockets is available as a Virtual Cinema release now. Read our review here.