Austin's Andy Bianculli on the ups and downs of movie music 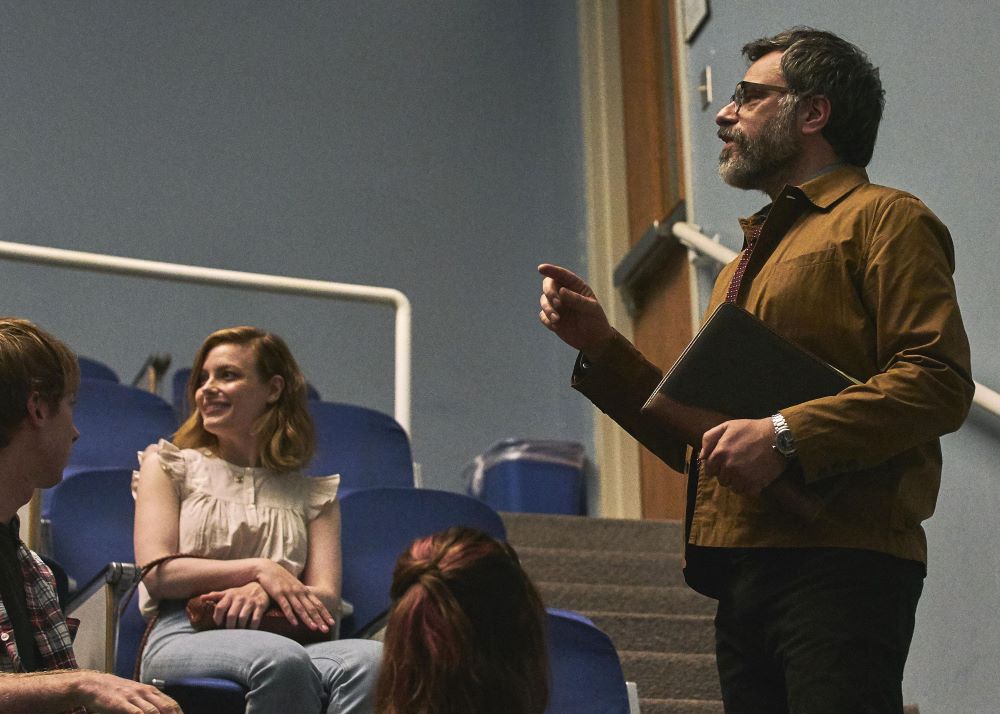 Gillian Jacobs and Jemaine Clement in I Used To Go Here, the upcoming comedy soundtracked by Austin's Star Parks

“It was gonna be fuckin’ cool,” Andy Bianculli predicted, those six deflating words epitomizing any best laid plans of 2020.

The Austin-based singer and multi-instrumentalist was referring to the canceled South by Southwest Film Festival world premiere of I Used to Go Here, the new feature by Kris Rey (It Was Great, But I Was Ready to Come Home, Unexpected), starring Gillian Jacobs and Jemaine Clement. Its soundtrack utilizes eight pieces of Bianculli’s music – six tracks pulled from his band Star Parks’ recent four-star LP The New Sounds of Late Capitalism, and two additional instrumentals.

“We were invited to the premiere and then they were going to have us play their party at Cheer Up Charlies – then it all got canceled,” Bianculli recounted. He regretted not getting to talk music with Flight of the Conchords star Clement. “That was maybe going to be the only thing I’ve had going on during SXSW, where I really wanted to be there.”

The comedy tracks the return of first-time novelist Kate Conklin (Community's Jacobs) to her alma matter to deliver a reading of her recently released book. That work, Seasons Passed – which sounds increasingly trite and tepid each time it’s referenced – meanwhile struggles to find an audience outside of the university’s writing program, helmed by her former professor (Clement). Amid anxiety over her peers becoming mothers, her former fiancée starting a new relationship, and the realization that her book sort of sucks, she befriends a group of coeds living her old house and their priorities become weirdly intertwined.

Especially for college grads teetering on the verge of respectable adult existences, I Used to Go Here will make you wince knowingly and chuckle often. The themes that endure: catching a spark off the unencumbered potential of youth, examining one’s glory days through older eyes, and attaining perspective on your creative successes and failures – all arrive with palpable feelings of nostalgia.

“Yeah I think that sounds about right,” laughed Bianculli, who hadn’t yet seen the film at the time of our interview. “I think that’s my biggest problem as a musician. I’m not trying to make music that sounds old, but I’m interested in that and a lot of it is very sentimental – it’s pretty fuckin’ cheeky.”

The singer/guitarist/pianist, whose latest LP was heralded as a depiction of “postmodern discontent,” reveals that he actually had no hand in scoring the 80-minute comedy – rather his music was used as dressing. Rey called him after the film was completed to inquire about using his already existent songs. Afterwards he send her additional instrumentals, one of which ended up being used in a trailer.

“You don’t really how people enjoy your music, when they listen to it, what context,” he ponders. “I wouldn’t put my music on when I’m going out to have nice time. I would probably listen to it when I’m destroyed and thinking about something.”

Meanwhile Bianculli, a music nerd with a fanatic appreciation for film work like Goblin’s 1977 scoring of Dario Argento’s Suspiria, hopes he can parley Star Parks inclusion in I Used to Go Here into opportunities where he could compose specifically for film. “That’s exactly what I want to be doing,” he confirmed. “What else can you really do right now as a musician anyway?”

I Used to Go Here arrives on VOD on Aug. 7 and will screen at Blue Starlite Mini Urban Drive-In Aug. 13.