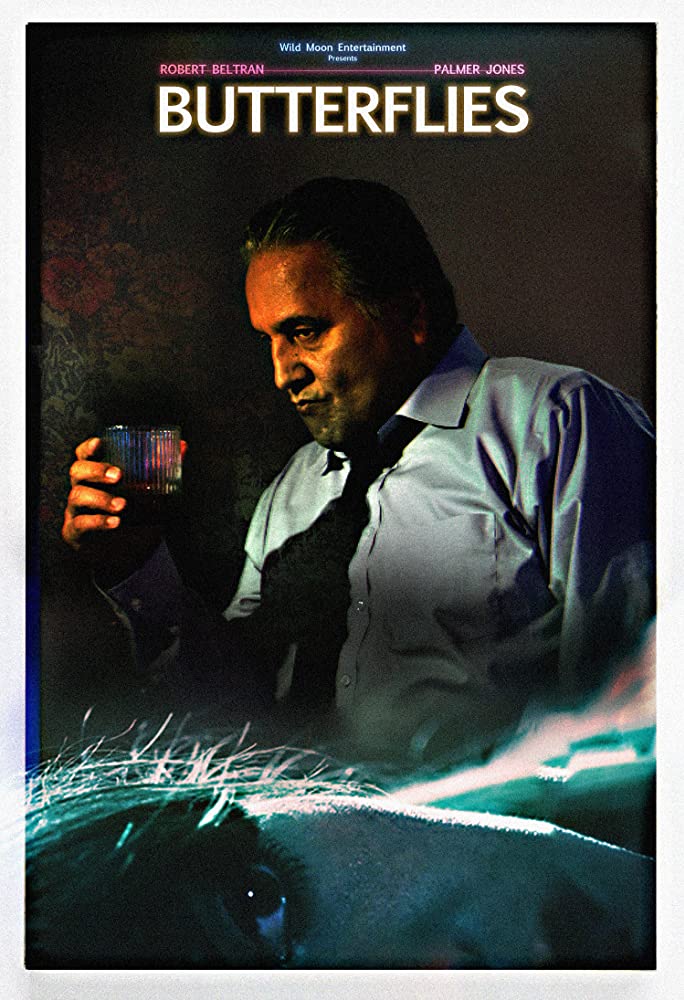 Welcome to Now Streaming in Austin, highlighting locally made titles to watch while self-quarantining.
For many audiences, Robert Beltran will always be the honorable Chakotay from Star Trek: Voyager. But writer/director Ken Brisbois found something darker, more enigmatic for his short, "Butterflies."

The Austin-shot drama, which is available now via Amazon, stars Beltran as James, a businessman who has a sex worker called Lynn (Palmer Jones) come to his hotel room. James has abasiophilia - a psychosexual attraction to people with mobility issues - and is initially furious that the agency has sent the wrong woman, even though she (like his regular appointment) is in a wheelchair. What unfurls in their barbed exchanges is less about a kink but more about the origins of paraphilia, power dynamics, and society's desexualization of people with disabilities.

If it sounds a great leap from Beltran's most famous role, it's because Brisbois didn't really know him from that part. Instead, he was just another dad whose daughter went to preschool with his daughter. Brisbois said, "When the girls had play dates Robert and I would sneak off to talk about football and theatre."

Brisbois, whose career includes both theatre and reality TV (often with an automotive bent), had originally written "Butterflies" as a stage play, and increasingly saw Beltran as the right man to play James. "Robert is a leading man type but with a really brooding undercurrent to him. He has that same quality that Marlon Brando had — charming but with something dangerous underneath. He read the play and said, 'Let’s do it.' I think as an actor he liked the opportunity to be in one scene with one other actor for 10 minutes.

Casting James was simple: But finding the right woman for Lynn was much tougher. The initial list was 800 names long, and Beltran read with 50 of them. However, it was Austin native Jones, who grew up in Tarrytown, who brought the spark they needed, and was prepared to equal Beltran's presence. "Palmer gave him hell from day one," Brisbois said. "They had instant chemistry. She left the room and we were like, 'Damn!' She had that Texas feistiness about her, which I think really serves the character."

Austin Chronicle: What brought you to Austin to shoot?

Ken Brisbois: I was supervising producer on Iron Resurrection 4 for Motortrend. My cinematographer, James Conant, was the director on that show and it was a chance for us to work together. So I was flying back and forth between LA and Austin every week and staying in a tiny house off South Congress. I walked around the city almost every night and loved it and I was attending the different film mixers. I figured it was easier to bring two actors to Austin where I had a crew and equipment ready to go. I loved the excitement of shooting here and we hope to do more. We have a TV series in the street racing world and a horror script that we would like to shoot in Austin.

“I was working as a bartender in Beverly Hills. The CEO of the restaurant would come in with his wife for dinner. ... He cared for her like a saint, I mean he would dote on her hand and foot. And about two hours after he brought her home he would come back to the bar and drink with younger women and really live it up.”
AC: There's something very Mamet-esque about the dialog, the clipped and precise pronunciation. What was the writing process, and were there any particular influences?

KB: I love David Mamet’s writing, as well as playwrights like Sam Shepard, Sarah Kane, and Neil LaBute. Playwrights who just come out swinging. "Butterflies" started out as a play. We put it up in Los Angeles and subsequently at the Boston Theater Marathon. That allowed me to really hear the dialogue out loud and adjust it to the audience. The trick with this film was to keep the ideas, the rhythm, the energy of the play, but make it visual and natural in what is a much more intimate setting.

AC: The underlying theme - of fetishes being psychological, rather than sexual - is a fascinating one. How did you become interested in this idea of kink as character?

KB: I’ve read that fetishes stem from things that happened to you when you are young … around 10-12 years old. Essentially they are manifestations of trauma or PTSD. And these fetishes can be powerful, they can last a lifetime. James has PTSD from the car accident — and that heavy burden starts to blend with his sexual fantasies in his subconscious. Like a symphony rising in his head as he slips down into mental collapse.

AC: What was the genesis of the idea for having Lynn be in a wheelchair?

KB: I was working as a bartender in Beverly Hills. The CEO of the restaurant would come in with his wife for dinner. This big handsome, regal, well dressed gentlemen. His wife was a former model but was in a wheel chair and not able to move much at all. He cared for her like a saint, I mean he would dote on her hand and foot. And about two hours after he brought her home he would come back to the bar and drink with younger women and really live it up. He was two, totally different people. That was the genesis of "Butterflies." I just spun it into something else.

As a dramatist I liked the wheelchair as a device because it accentuated the power imbalance between the two characters. Ultimately that dynamic gets flipped.