Twilight director solves the Quibi enigma for her new show 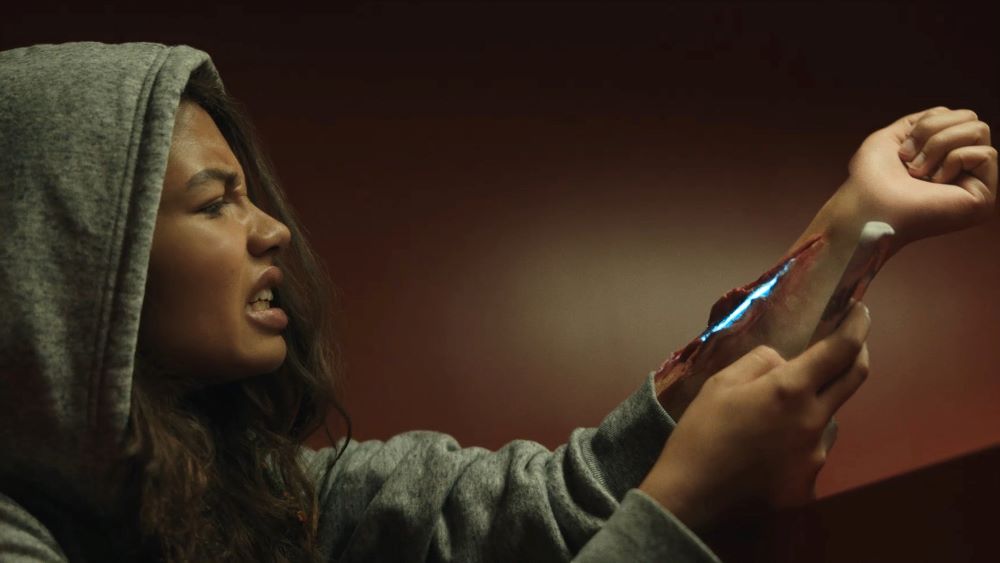 Who are you? Aisha (Helena Howard) struggles with that enigma in Don't Look Deeper, the new near-future drama from Quibi directed by Catherine Hardwicke (Miss Bala, Twilight, Lords of Dogtown). (Image Courtesy of Quibi)

It's not often a filmmaker has to invent the wheel. However, when Catherine Hardwicke signed up to direct sci-fi drama Don't Look Deeper for episodic drama platform Quibi, that's pretty much what she had to do.

The story of Aisha (Helena Howard), a teen who discovers that her whole existence is based on a massive lie, is Hardwicke's first excursion into science fiction. The underlying themes of technology and humanity made Don't Look Deeper new territory for her, with all the characters living via their phones and via tech from 15 minutes into the future. However, because of the coronavirus lockdown, the present has caught up with that future. "Now we're all living in a Zoom world," Hardwicke laughed.

Yet she'd already had to adapt to that mindset when she signed on to make the show for Quibi. The streaming service, which launched earlier this year, is defined by being formatted for phone and tablet viewing - whether the viewer is watching portrait (with the phone upward) or landscape (on its side). Great for the viewer but a major challenge for the filmmaker who has to make an image that makes visual and narrative sense in both directions. Moreover, Hardwicke was one of the first directors approached by the service, making her one of the first to solve this unique problem.

The experience took her back to her days studying architecture at UT Austin, taking art classes. "You do a portrait drawing, and it's usually just one person - that's why you call it portrait. You don't usually try to tell action in a portrait format, or two characters talking - that's when we go to landscape."

Composing shots that worked both ways "was a whole new mind-boggling challenge," she explained. Her solution was to work first and foremost in traditional cinematic landscape, complete that version in edit, then recompose in post-production for portrait, even using different takes or adding element to the image. "When you switch to portrait mode, you're actually getting a close-up on the person. You don't feel the environment, but you feel more what they're feeling. You get that choice - 'I want to be closer to that face, almost like Facetime with the person.'"

As one of the first two drama series to start shooting for Quibi, Hardwicke couldn't really ask anyone else for advice. "We were just, boom, jump in the deep end, which made it kind of exciting." Since then, she said, "I did have a few people contact me and I explained to them the way I did it, but they might have done it in a different way, because each person had a different concept."

While the format and the genre is new, in many ways this is familiar turf for Hardwicke. The Texas native has a wide resume, from erotic thrillers like Plush to the action telenovela energy of Miss Bala, but there's been a thick strand of unusual and unconventional coming-of-age dramas in the tapestry of her work, starting with 2003's Thirteen and its 2005 follow-up, Lords of Dogtown. Even now, she said, "People like to send me a beautiful coming-of-age story of a young woman." In this case, she said, "It's a coming age story, self-discovery, who am I? But when she discovers who she is, wow, it's nothing like we've ever imagined before. So I was intrigued on page one. Well, page 10, which is where discovered what was going on."

There's more at play here than Hardwicke returning to coming-of-age stories - or rather, more than the traditional idea that they're just about the teen. In Hardwicke's breakout debut Thirteen, Melanie Freeland (Holly Hunter) was just as rounded a character as her daughter, Tracy (Evan Rachel Wood), and that's true in Don't Look Deeper, and part of what attracted the filmmaker. "In this case, we have Don Cheadle playing Helena's father, and he had a very complicated relationship with the truth, with compassion, with love for his daughter, controlling her, protecting her. And then you have another really cool adult character, which is Emily Mortimer, who is like a creator, like an artist, controlling things. So I found all three of the characters, Helena and the other two, the way they were intertwined, quite juicy." That's her ideal situation: "I like to method direct feeling like each character."

Season one of Don't Look Deeper is available on Quibi now.