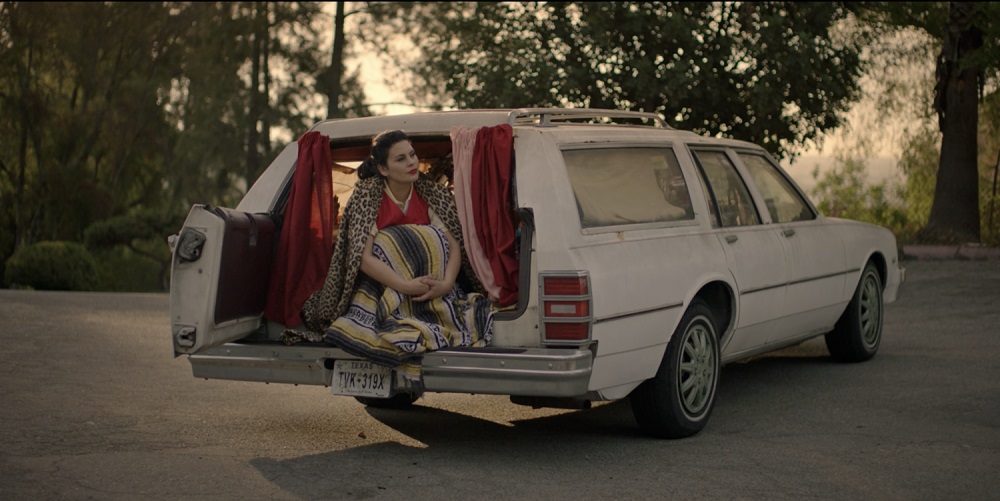 Raquenel as one of a quartet of characters brought together by the failure of the American Dream in "Our Home Here," playing this weekend as part of Cine Las Americas' Virtual Showcase

Welcome to Now Streaming in Austin, highlighting locally made titles to watch while self-quarantining.
Does a dream die when you wake up, or is that just when you struggle to make it a reality? In Austin-based filmmaker Angela Chen’s “Our Home Here” four characters struggle with the way the American Dream has let them down.

In the short, which screens for free this weekend as part of Cine Las Americas streaming Virtual Showcase, each contends with different, intersecting struggles. Second-generation migrant Rose (Dianne Doan) is dealing with the misplaced rage of her brother, Dylan (Brandon Soo Hoo), and her own feelings of dispossession. Sean (Nick Fink) is lost in his own aimlessness; while Celine (Raquenel) pretends to her distant family that she’s got a high-powered job while she’s really living out of her car, working. Are they living in a fantasy, or does a bloody moment that brings them together present a way to overcome? “We need dreams because it instills hope,” Chen said. “We wake up every day to fight for what we believe in.”

Austin Chronicle: The key to “Our Home Here” is that are all four characters are represented as rounded figures. How did you develop that structure, and what was your thinking for interweaving their stories?

Angela Chen: The film explores the themes of identity, family, and the desires for autonomy. I wanted to portray the complexity of living in America especially as a person of color, a woman, a second-generation American and also as an immigrant. Armed with multiple perspectives, we show different sides of the same coin as two men come to a clash while we explore the second-generation siblings who have been abandoned from their two cultural identities, and an immigrant mother who had left her home country to pursue a dream to enrich her family back home.

These stories stemmed from personal experience and true events so interweaving these narratives through different characters offered a wider view to draw commonalities and hopefully to create a new or aligned understanding of our home here.

AC: The underlying theme of clinging to a home that may not even exist anymore is a powerful one, and this sense of alienation from the American Dream is what unifies the characters. But why do you think the idea of the American Dream remains such a powerful cultural force, even after it has failed so many people?

Angela C: I think there is value in the human desire to believe in an honest and just world, that the work we put in will equate to the benefits reaped, that equality exists, and that opportunity is equitable. Perhaps that’s what separates and defines the American Dream from the American Reality where systems of oppression and discrimination fail our human rights.

AC: You've discussed how this was inspired by an incident in your own life. Was it more challenging to develop the elements in the script that were more personal, or the viewpoints further from yourself?

Angela C: To define and confront oneself with honesty and to conduct due diligence in empathizing and understanding others are both equally challenging because one informs another. As a storyteller, there seems to be no confirmation of truly getting it right. Character and life experiences come from a series of choices similar to the process of developing stories. When they run parallel, it can become a deeply challenging and illuminating process.