Apollo 10 1/2 to be animated by Austin's Minnow Mountain 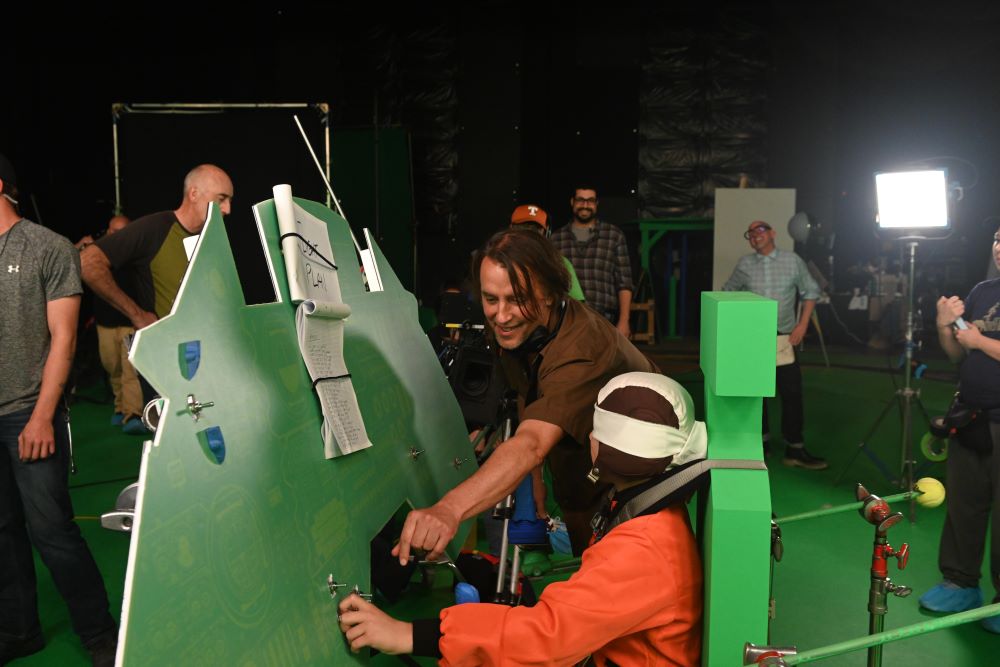 Richard Linklater on the set of Apollo 10 1/2: A Space Age Adventure, with young actor Milo Coy. The Oscar-nominated filmmaker announced today that the film will be coming to Netflix. (Photo by Matt Lankes)

Richard Linklater is headed into space with Netflix, as the Austin director has just announced that his next picture, a return to Waking Life-style animation called Apollo 10 1/2: A Space Age Adventure, will be released by the streaming giant.

A period piece set in Houston in 1969, Apollo 10 1/2 sees Linklater return to the live-action/animated hybrid of Waking Life and A Scanner Darkly. It's a co-production between Linklater's Detour Film Productions and Netherlands-based animation house Submarine. If that name seems familiar, it's because they undertook Rotoscoping duties (the process of animating over live-action footage) for Amazon's Undone, on which they worked with Austin studio Minnow Mountain, who are also adding art for the film. (In one of those uniquely Austin moments, Minnow Mountain was founded by Craig Staggs, who got his start in the industry working on – you guessed it – Linklater's A Scanner Darkly.)

The film was written and directed by Linklater, who managed to finish shooting just before the industry went into its current pandemic lockdown, Apollo 10 1/2 reunites him with some familiar faces, including his The School of Rock and Bernie star Jack Black, Glen Powell (Everybody Wants Some!!), and Bill Wise (Boyhood), plus Zachary Levi (Shazam!), Josh Wiggins, Natalie L'Amoreaux, Sam Chipman, and Danielle Guilbot as well as Austin talents including Lee Eddy (Mercy Black, Red vs. Blue, Amazon's upcoming Panic), Jessica Brynn Cohen, and first-time actor Milo Coy. The film is produced in Austin by Tommy Pallotta and Mike Blizzard, and by Femke Wolting and Bruno Felix for Submarine.

The film has been a passion project for Linklater, who has often bemoaned the lack of movies about his original hometown of Houston. Apollo 10 1/2 celebrates one of the city's greatest contributions to the world, its role in the Space Race. Using the Apollo flights of 1969 as its background (the low Earth orbit Apollo 9 in May, the Moon orbit of Apollo 10 in May, and Apollo 11's era-defining Moon landing on July 20), Apollo 10 1/2 sees the program from two perspectives: From the angle of the NASA pilots, technicians, and ground control crew mounting these incredible missions, and from that of a young kid (Coy, who – full disclosure – is the son of Chronicle Food editor Jessi Cape), growing up in the shadow of the Manned Spacecraft Center (now known as the Johnson Space Center), who dreams of being part of this moment in history, all the while as earthbound as any other child who can only experience the moment through their TV screen.

Linklater said, "It struck me years ago that this was my film to make, from both a chronological and proximity level – I was there, going into 3rd grade. Our unique animation style allows both the conjuring of a world long gone, and the flowing, playful expression of memory and imagination. It’s been a fun, creative journey to incorporate things like 3D graphics into a live action shoot to help bring this story to life."