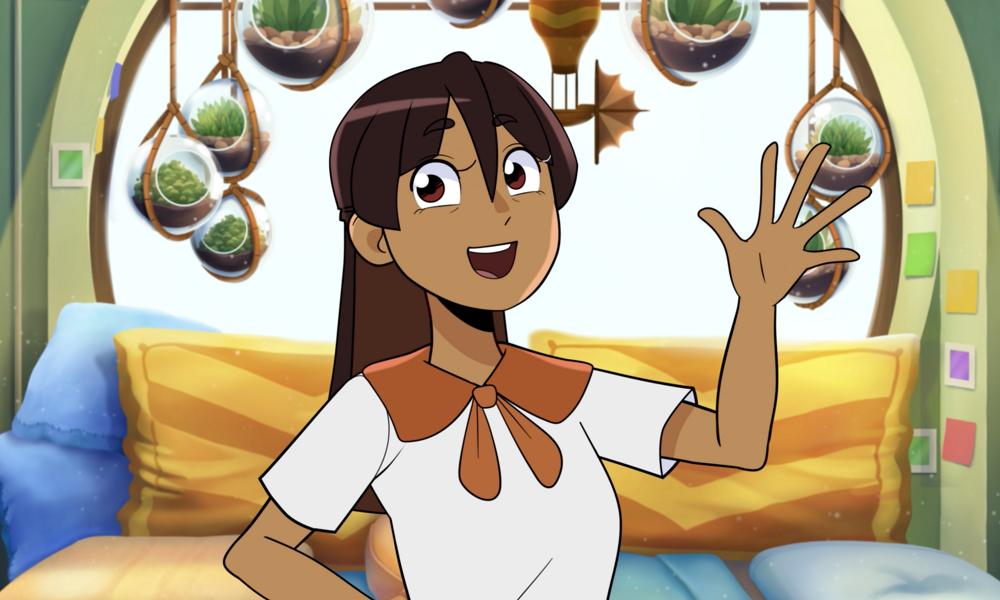 The greatest adventures begin with a step toward the door, and so it is with Recorded by Arizal, the latest series from Austin's Rooster Teeth. The show will reveal a bigger world, but not quite yet. Series creator Yssa Badiola explained, "We thought of being outward first, and then we went inward for these preludes."

Recorded by Arizal follows Arizal (voiced by Christine Marie Cabanos), a teenager in the far-future city of Maktaba. She wants to be a Recorder, designated to head into the world and explain life beyond the city limits to its residents. Well, not following yet. The four-part prelude series, the first episode of which debuts today on Rooster Teeth's First platform, is made up of her application videos to become part of the Recorder program. They introduce the audience to the excitable, empathetic 17-year-old, her world, and the POV approach to story-telling that Badiola has adopted.

The show begins in Arizal's room, and that's exactly why Badiola settled on the vlog format, calling it "a great way for us to use exposition to do world-building." She'd watched a lot of vlog-style drama series from the mid-2000s, including Pemberley Digital and The Lizzy Bennet Diaries. "Everyone is telling their own story," she said, and that helped shape the idea of Arizal. The final essential component and influence was Any Malu, a Brazilian cartoonist who became one of the first animated vloggers. As soon as Badiola realized that it was even possible to tell a vlog-style story through a cartoon format, "I wanted to do it animated."

Now she had the idea, the next step was getting the show - or at least these preludes - made. With her interest in Young Adult fiction, Recorded by Arizal would be a very different project than most of what Rooster Teeth makes and what the audience expects from it, so pitching the show "was almost an exercise of, 'how do we get other audiences to ease into this?'"

But Badiola didn't want to just throw the idea out there. She said, "I saw what I wanted for my pitch personally, and the standards for what I wanted the show to look like was more than what was being offered at the time."

Fortunately, Rooster Teeth had an internal process for pitching new shows, but she still needed a classic elevator pitch "and that was the hardest part when I started this in 2017 [because] it was such a unique idea." Her solution was to show, not tell, and she developed a full animatic (a rough animated version of the show) to give the studio an idea of what she wanted for audiences. "Super simple, black and white, even grey, just get the main story down. Expressions, how the character looked. The main thing for me was the humor."

That process worked. "There was an instance when I was pitching the show to someone and even with my words he was, 'I don't really understand.'" She showed him the animatics "and he went, 'Oh, I think you've really got something.'"

There's a lot of her in Arizal ("my joke with a lot of my friends is that I'm the self-insert"), but during development she collaborated with and listened to other people - not just about the series itself, but how to tell a story. The first version was deeply reflective of her own story, and that fitted with what one friend told her. "He believes that large published works tend to be more personal in the first iteration ... and I feel that this show definitely came from this desire of my wanting to relay some observations and things I felt growing up."

However, Arizal isn't some lightly fictionalized version of Badiola. Over the years, she'd heard the old maxim of "write what you know," but as the story developed she absorbed the influence of legendary Pixar animator and director Pete Docter and his maxim: "Write what you want to learn." That tied in to the essence of Arizal, who wants to find out more about the world, and her boundless curiosity is key the the whole story.

However, that's where another influence came in: The smash-hit confidential comedy Fleabag, and the idea that audiences will understand that a POV character, even one talking to the camera, is learning what's going on at the same time as the viewer. "That's what makes storytelling so interesting," Badiola said. "You have to see it from all these angles."

That's why Arizal is both the main character and the audience's lens into this world. "She is the one reason that people will keep coming back, so shes the one person who should be telling that story." This created a new challenge: making her voice authentic for a kid in the far future, but still accessible for modern audiences. "Arizal is not talking to a person in 2020," Badiola said. "She's talking to a council in her time, far in the future. She's not having to explain everything. She assumes that the people behind the camera already know everything."

That's where the prelude season's structure evolved, slowly pulling back from Arizal talking to her camera, to interacting with other characters, and finally the first glimpse of her city from the outside. If these first episodes are well received, Badiola hopes to go even further out into the world. "The prelude is a good test for us."