A Permanent Vacation in Palm Springs With Max Barbakow

A time loop movie influenced by everything but Groundhog Day 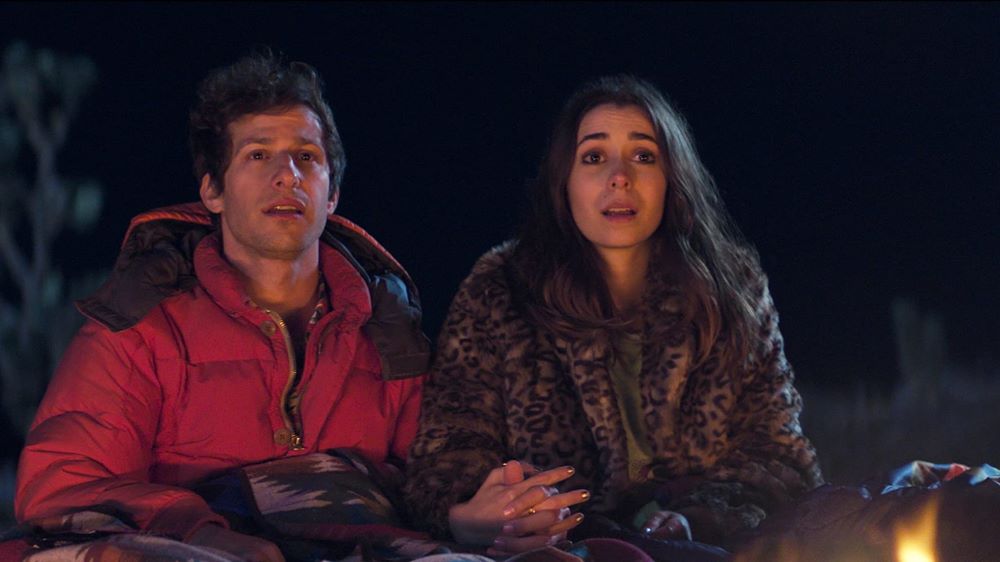 At some point, Groundhog Day became a genre, not just a film. It's the common cultural shorthand for a cinematic time loop film, which is exactly what director Max Barbakow and writer Andy Siara weren't envisioning when they first started writing Palm Springs. Still, they inadvertently ended up made one of the best of the genre.

It wasn't just that they didn't want to follow in Bill Murray's well-worn footprints. Barbakow said, "Both of us are terrified of riding on the coattails of anything too closely."

When the pair started developing the script in 2016, it was "a bizarro form of collective therapy from our film school experience," Barbakow said. "It started as a weird version of Leaving Las Vegas in Palm Springs, where a loser goes into the desert to die and find redemption." At the same time, they were going through what so many people go through a few years after college: a summer where it feels like everyone they know is getting married - including Siara. When it came to folding that into the script, Siara's side was "super-hopeful and beautiful, and I brought the cynical side." ("Now I'm engaged and happy," the director added.) "The movie began as not a time loop movie but a way to explore these themes in an alternative package."

The science-fiction element evolved because of influences like doppelganger rom-com The One I Love, and in the story are stumbled upon by Sarah (Cristin Milioti). Forced to attend her sister's wedding at one of those fancy Palm Springs resort hotels, a day there would already feel like an eternity. That's when a weird stranger called Nyles turns up. He's tuned in to everything that's going on but also completely disinterested, which she finds out is because he's been stuck in a time loop for longer than he can remember. Unfortunately for her, now so is she, and they keep having to attend this same dumb wedding reception. Again. And again. And again.

“Any time Andy Samberg reads a script, you offer him the project.” - Max Barbakow, director of Palm Springs
It's the mix of character and innovative science fiction that normally in Austin would play at the indie-centric Other Worlds film fest ("There is probably a version of this movie in another multiverse playing that festival," Barbakow said), but their small project suddenly became much larger than the duo could have ever expected when they were working though their film school blues, and now is one of Hulu's midsummer prestige events. The big change to their timeline? The script ended up on the desk of Andy Samberg. "Any time Andy Samberg reads a script," Barbakow said, "you offer him the project."

As long-time fans of the Lonely Island troupe (both their prodigious work ethic and expansive output), when they signed on, and Samberg took the part of Nyles, it changed the trajectory of the project. Barbakow said, "Andy said that when he read the script, that it made him laugh ... It felt relatable and accessible to him." Moreover, it highlighted a side of the actor that isn't always seen. "A little different, a little more performance-driven, driven by sadness and pathos ... We were definitely always, 'Let's make this grounded human story with these temporal mechanics.'"

The first piece of narrative discipline the Lonely Island team brought to the story was to actually tighten up how the time loop worked. At the same time, the script revisions and even final edit cut out a lot of what increasingly revealed itself to be unnecessary detail. "It's not about the mathematical equations," Barbakow said. The discussion of temporal mechanics was really a way to explore the relationship between the characters, "and that's when it gets fun."

The big breakthrough is that Sarah catches on to the time loop quickly. Why? Barbakow and the team realized that you don't need a degree in physics to know when you're in a Groundhog Day scenario. Audiences, as well as the protagonists are "narratively literate" because of the number of films and stories that have played days on repeat. "So many of them spend a lot of time explaining the physics and the rules of a loop, but it seems to me that if you're going to have a time loop movie, people know the rules and it would be a time suck to explain it."

Instead of telling, they could show, using the idea that Nyles and Sarah have eternity to waste on ridiculous pursuits. That's where another, utterly unexpected influence: Paolo Sorrentino's 2013 meditation on mundanity and creativity, The Great Beauty. Most importantly, its elaborately choreographed party scene. "The scope of our dance sequence doesn't match that," Barbakow said, "but it came from the idea of a guy who is the master of the universe, knowing everyone else's dance moves, and the speech."

The scene become an instinctual explanation of the time loop, without any pseudo-scientific technobabble, and that's what Barbakow explained as the real point of the story. "When we were working on the script, the north star was always making each other laugh, and making each other feel things."