“I’m lucky to have two movies coming out. I can’t complain too much.” 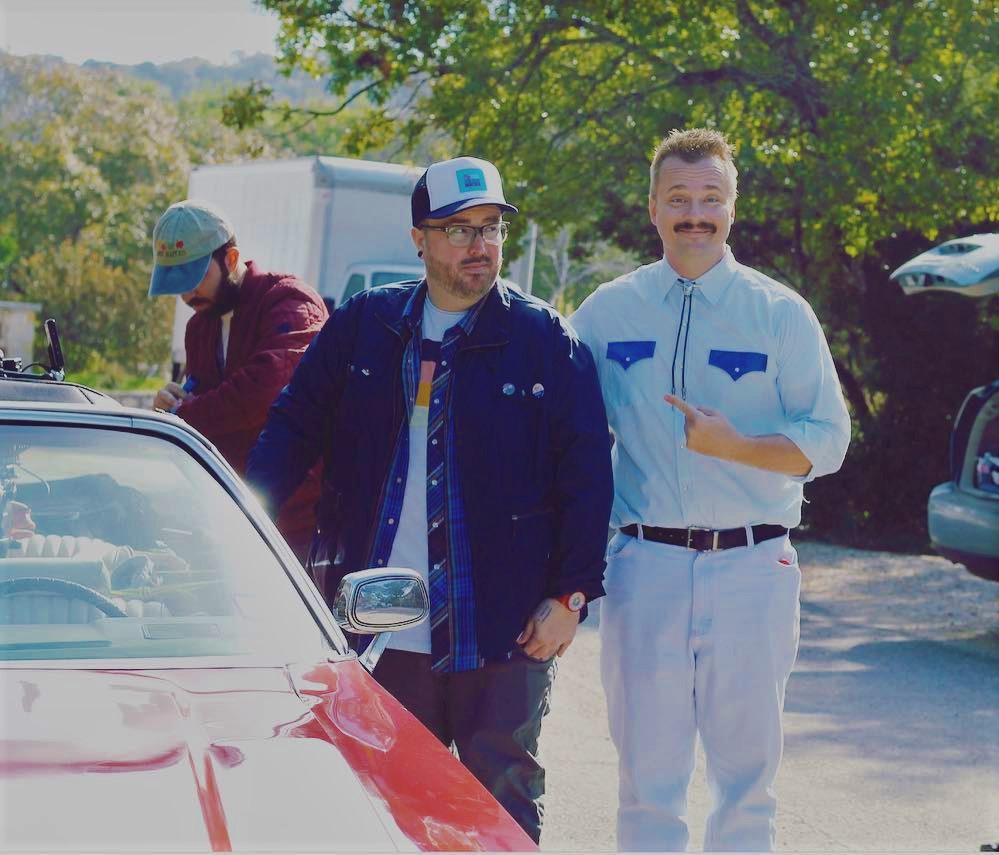 Director Aaron B. Koontz (L) on the set of Scare Package

Aaron B. Koontz, Paper Street Pictures cofounder, Writer/Director/Producer
Credits Include: Camera Obscura, Scare Package
Sometimes you dodge the bullet, and you don't know until it's whistled past your ear.

That's like how Aaron B. Koontz planned to have his upcoming supernatural Western, The Pale Door, ready for the Spring festival season.

Then, after a nasty health scare over New Year, he realized those March deadlines were impossible. He recalled thinking, “"I can't kill myself to make this movie," rescheduled for the Fall season, and gave himself an extra month and a half to work on it.

There was no way he could have foreseen that the Spring circuit would be eviscerated by the pandemic. Fortunately, he already had a full slate for the year. He was already scheduled to promote his last feature, anthology comedy-horror Scare Package, as it headed to specialty streaming service Shudder, plus he was working on the commentary track, as well as putting the finishing touches to The Pale Door. “I was lucky that I had so much work to do.”

The lockdown gave him real breathing room to finesse The Pale Door. The final version is 17 minutes shorter than the unwieldy cut he was struggling with last December, and he was able to add in some extra VFX, using the green screen facilities at Renegade Studios in Taylor, which he cofounded. He even managed to hire local graphics wiz Brian Behm to create "this big, custom credit sequence that we would never be able to afford otherwise."

Still, it’s not been all wine and roses. One new project was supposed to shoot in May, but fell through due to a funding partner pulling out, and two foreign distribution deals for Scare Package collapsed directly as a result of the economic impact of the pandemic (one distributor went out of business, the other simply could no longer afford to take on a new title).

He’s also had to give up in his hopes for a major Fall festival run. “We don’t know if they’re happening,” he said, “and if we did that in September every movie on the planet will open in October and we’d get lost in the shuffle. RLJ, who are distributing the film were like, ‘Aaron, if you want to keep it like that, we’ll keep it like that, but we are telling you – the best thing for this movie is to release it as soon as we can,’” and so The Pale Door opens in late August.

Koontz is already planning for when production starts up again, as he and long-time creative partner Cameron Burns took advantage of the hiatus to write another script, “start to finish, completely done.” When they’ll be able to film it is still up in the air but right now, he said, “I’m lucky to have two movies coming out. I can’t complain too much.”