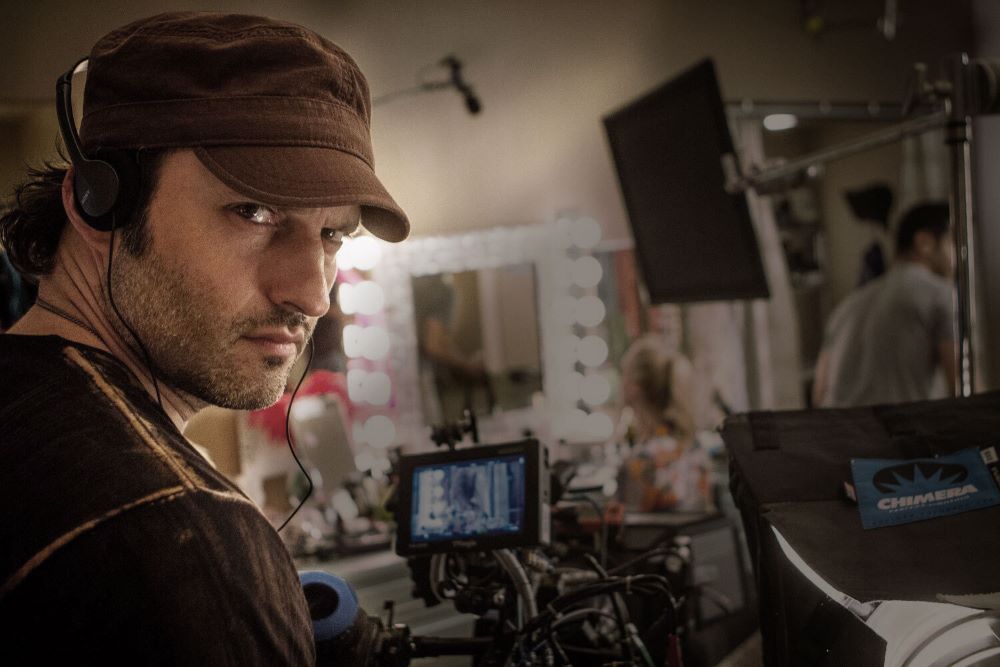 Robert Rodriguez (pictured here on the set of Machete Kills) will be one of the first major directors to shoot a film under the industry's new Safe Way Forward guidelines, as he relocates his new feature Hypnotic (starring Ben Affleck) from Los Angeles to Austin

Big studio films are heading back to production, and one of the biggest is coming straight to Austin. This morning, Robert Rodriguez announced that his latest film, Hypnotic starring Ben Affleck, has relocated from California and will start shooting out of his East Austin Troublemaker Studios next month.

The filmmaker describes the story, which he scripted with Max Borenstein (Kong: Skull Island, Godzilla), as a "very modern Hitchcock-type movie." Affleck plays a detective involved in a missing persons case while investigating "a string of impossible high-end crimes. It's got a lot of action, a lot of twists, and you never really know what's real."

Hypnotic is the second title from Solstice Studios. Founded in 2018, the studio is aiming at $20-$80 million budgets – the forgotten midrange between the billion-dollar-box-office-or-bust blockbusters and the low-budget indie scene. (Their first release, Russell Crowe vehicle Unhinged, will be released July 10.)

Rodriguez originally planned to shoot the film starting April 27 in Los Angeles, but the coronavirus pandemic lockdown derailed that plan. Now it will begin primary shooting in Austin on July 27 as one of the first major shows to reenter production. It will also be one of the first productions to implement the new Safe Way Forward production guidelines. Drafted by the Directors Guild of America (DGA), International Alliance of Theatrical Stage Employees (IATSE), International Brotherhood of Teamsters (IBT) and the Basic Crafts, and Screen Actors Guild-American Federation of Television and Radio Artists (SAG-AFTRA), it sets standards and best practices for productions during the pandemic.

Rodriguez is already touting the huge economic impact the shoot will have, at a time when the Texas film industry (like many other sectors) has been heavily impacted by the pandemic lockdown. The studio estimates they will spend around $24 million in-state, resulting in:

The director of El Mariachi and Spy Kids has shown repeatedly that he can make his own movies in Austin, but he's also got a proven track record bringing in bigger studio projects, including Predators and the biggest film to ever shoot in Austin, Alita: Battle Angel.

However, Solstice planned to film in Los Angeles (in part to fit in with Affleck's schedule), and it was only when they calculated the cost of spinning production back up in California after missing that April date that Troublemaker became that much more attractive – especially with the added costs resulting from new protocols to reduce coronavirus risks. "It's one thing to tell people how economically advantageous it is to shoot in Austin," Rodriguez said, "but when they went and started doing the budget out there, and seeing what a huge difference it was, they went, 'Oh, man, we've got to save money now.'"

The ultimate deciding factor, according to Solstice president and CEO Mark Gill, is the Texas Movie Image Industry Incentive program, "which makes the film economically feasible to undertake in Austin.”

Dana Belcastro, Solstice's head of Physical Production, echoed both Gill and Rodriguez. "We always felt that Austin was the best place to shoot it," she said, and now it's possible due to "the creative strength of Austin, and making Robert happy, and the incentive being as good as it is."

Ultimately, Rodriguez said, "It's great to be able to shoot here, bring jobs back to Austin, and open things up."