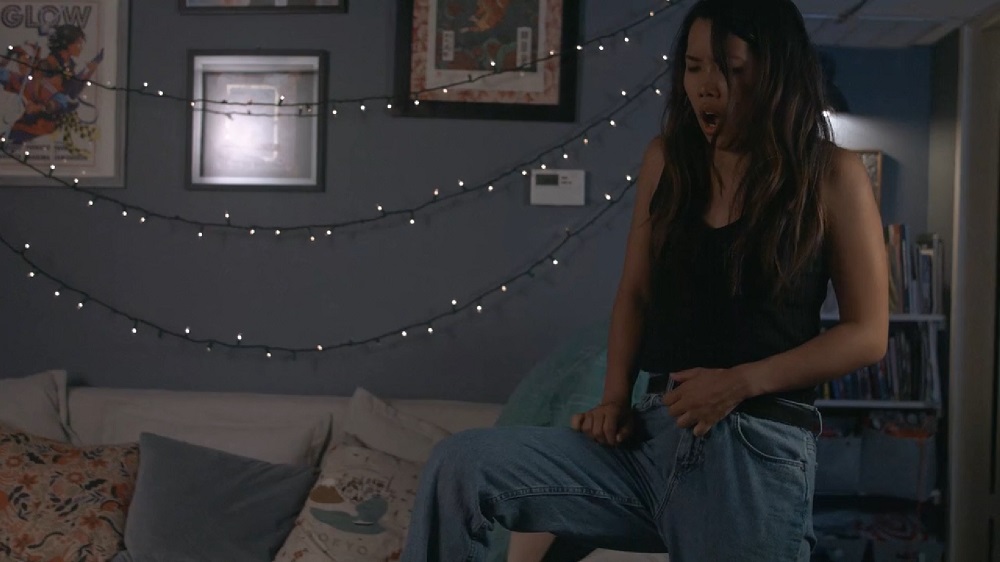 Welcome to Now Streaming in Austin, highlighting locally made titles to watch while self-quarantining.
When it comes to sex, everyone is told they need to listen to their body. But what happens when their body – or certain parts – won't shut up?

That's the gag at the crux of Kim Tran's comedy short, "Pussy Talk," about a woman, Kate (Tran herself) on the couch with a guy she really likes, Joe (Jacob Thompson). Like everyone on a big date, she has a voice in her head. Only it's not in her head, it's in her pants, and Gina (voiced by Kat Lozano) has a lot of opinions that she wants to share.

Tran's short is screening today as part of the Austin Asian American Film Festival's Online Shorts Festival (read more about that here), so before you catch this hysterical and pointed journey of self-discovery, we talked with the filmmaker about inverting the sex comedy tropes, and putting Gina in charge.

Austin Chronicle: First up, congrats on making what's basically a PG-13, fully-clothed sex comedy. Where did the idea come from?

Kim Tran: I thought it’d be funny to create a talking vagina character since vaginas are front and center to our most personal experiences as women: awkward sex, periods, giving birth… She’d have a lot to say. I wanted to give a voice to that.

Additionally, one thing that has always struck me is how men are taught to be so comfortable with their dicks and joke about them. I didn’t grow up in a world where that same openness and freedom was given to vaginas. Part of that is because we still live in a world where female bodies are controlled by old white men. It’s time to normalize the pussy. I want more vagina jokes that aren’t just “it smells like fish”.

AC: A lot of filmmakers tackle "learning to listen to your body" very metaphorically, and it's often a theme in horror, but going full comedy is a rarity. What was the process of finding the laughs in Kate's situation?

KT: Kat Lozano, who played Gina, and I, who played Kate, had a rehearsal where we talked about our relationship to each other. Kat and I had a natural repertoire together and we’re also comfortable improvising - so we would play and explore how Kate approaches a romantic situation scared versus how Gina gets fed up with that and takes matters into her own hands and naturally that relationship is full of conflict, which results in laughs because it’s a human and her vagina arguing about small stuff that they take seriously. Kat is also just really funny and went for it. When we had to record the queef, we were breaking up laughing and I kept telling her “wetter” and she would moisten her lips more and more, and blow raspberries harder into the crack of her arm. (TMI??)

AC: A big part of the comedy comes from Joe being able to hear Gina, rather than Gina just being Kate's inner monologue. How did you develop and shoot that?

KT: Kat Lozano was critical and present at every stage from rehearsal to production. She was on set with us and acting off camera with us, so there’s a natural flow to all our interactions. During one of the takes where Joe “discovers” Gina, Kat actually pinched Joe off camera without him knowing to give him an extra surprise and that’s the take we used!

AC: It also definitely changes the dynamic of the story, because it also becomes about Joe listening to Gina's needs too.

KT: Yes! I thought it’d be funny (and truthful) if, in the end, it’s all about acquiescing to Gina and making her feel loved, in order for Kate and Joe to continue their date. But of course, it goes off the rails.