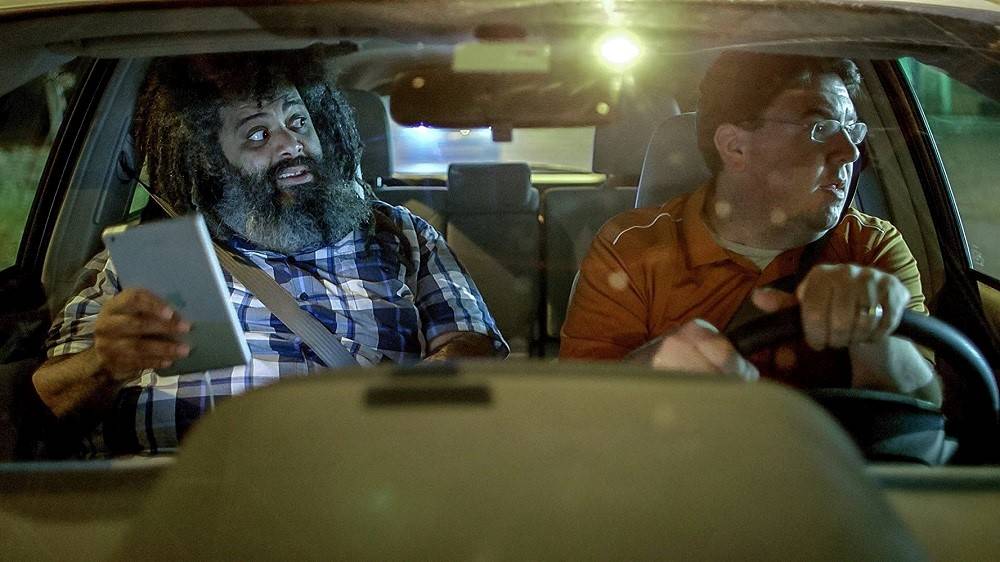 The pros and cons of hitchhiking: Chris Cubas and Erik Anderson in genrification comedy "Here Comes the Neighborhood."

Welcome to Now Streaming in Austin, highlighting locally made titles to watch while self-quarantining.
Remember the classic 1980s "one crazy night" comedy, like Don't Tell Mom the Babysitter's Dead or After Hours? And remember how that era was also ripe with social satires like Do the Right Thing?

Michael Charron's 2017 comedy short "Here Comes the Neighborhood" remembers both and brings them together for a hilarious and cutting 10 minute short about Trevor (Erik Anderson), a Prius-driving, burnt-orange-wearing guy who heads to Austin's hottest new food truck (the PBJ tacos are insane, yo) but ends up giving a lift to a local resident (comedy powerhouse Chris Cubas) with his own plans. Let's just say that Trevor's plan for a quiet night with his girlfriend, a few PBJ tacos, and maybe scouting out an investment property before the market takes off, well, could be a little derailed.

A pointed but not mean jab at oblivious gentrifiers, Charron's hilarious short features not only former Chronicle cover star Cubas, but also 2016 Best of Austin Winner Maggie Maye and a cameo from 101X DJ CJ Morgan - and it's streaming right now on YouTube.