Master Pancake Takes on Roar For Alamo on Demand 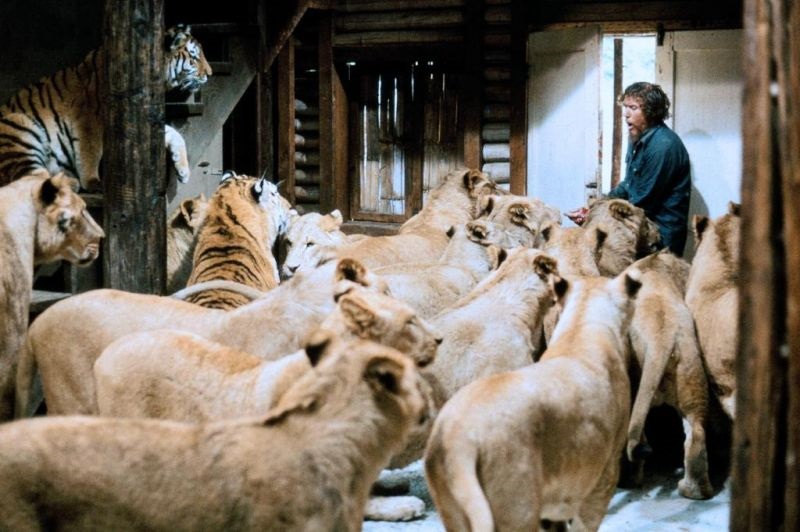 The insanity of Roar. The equal insanity of Master Pancake. Available now on Alamo on Demand.

Yes, after over 2,000 live performances breaking the Drafthouse's golden rule about not talking in the theater, Master Pancake has done their first streaming riff for the new Alamo on Demand VOD service.

The selection is a title that has become dear to the Drafthouse team's deranged hearts: 1981 animal oddity Roar. Filmmaker Noel Marshall and his wife, actress Tippi Hedren, decided to make a movie in their home, featuring the animals they kept there. However, this wasn't a few cats, or even a miniature pig. They'd stocked up with 150 tigers, lions, and assorted other sharp-toothed carnivores, who really had the run of the place. It was supposed to be an adorable kids' movie that also educated the young ones about nature. Instead, it's mostly Marshall, Hedren, and their children (including a teenage Melanie Griffith) trying and mostly succeeding in not being eaten. Let's just say lions don't take direction well. (For more about the insanity, read our interview with Marshall's son, John, "The Blood Stays in the Picture," April 29, 2015).

A minor success on its original release, Roar gained a whole new life in 2015 when the Alamo's distribution wing, Drafthouse Films, acquired and released it again (read our review right here). Now they've joined forces with the eight-time Chronicle Best of Austin-winning comedy powerhouse known as Master Pancake to disassemble this act of cinematic insanity.

Of course, this isn't the traditional Master Pancake, which has always been about the live experience. This time, Erler and the team (including comedians Ralphie Hardesty and John W. Smith) recorded the joint riff from the comfort of their own homes. Which, fortunately for them, don't have 400 pound carnivores trying to eat their heads.

“In many ways, Roar is like the movie Born Free,” says MP ringmaster John Erler. “But instead of just one lion, there are dozens of lions and tigers, and none of them have been trained in any way and are constantly jumping on members of the cast and making you feel nervous for their safety as they bravely try to say their lines. There’s a lot of big cats on screen, all with big personalities. It’s a very Jellicle experience. It’s like Born Free with an edge. I call it Hardcore Born."