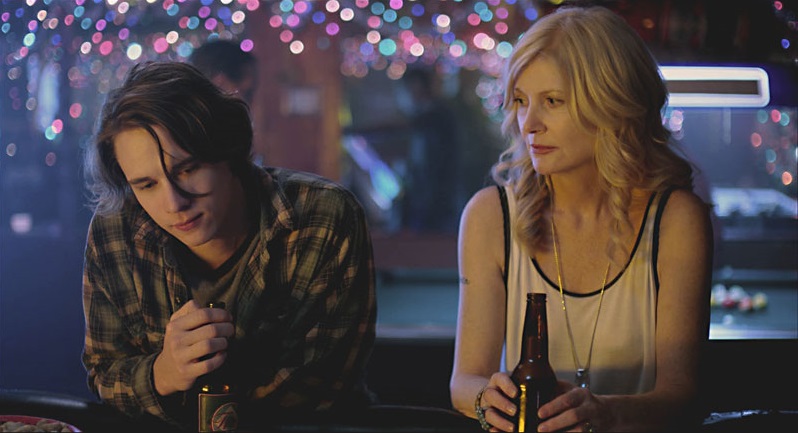 Welcome to today's Now Streaming in Austin, highlighting locally-made movies to watch while self-quarantining. If you're missing some familiar Austin faces as well as familiar Austin locations, then Texas noir Two Step - now streaming for free on Vimeo - could be what you need.

Alex R. Johnson's directorial debut is about the dark path that leads two men together. Webb (James Landry Hébert) is a low-rent thug and con man who dupes old people out of their money when he needs to make bail (like a low-rent version of Giovanni Ribisi's Marius Josipović in Sneaky Pete). On the far, far end of the moral spectrum, James (Skyy Moore) is just an El Paso kid whose grandma in Austin dies, and he's left to handle her estate. Turns out, she was one of the people Webb scammed, and that new $80,000 inheritance in his account is a prize that Webb wants badly.

Want the best news about this movie about people taking money from people who barely knew they had it? The filmmakers have put it online for free, right now, to get you through this coronavirus quarantine.

Johnson moved to Austin from New York, and Two Step is loaded with ATX reference - first but not least being local dance instructor Dot (a blazing performance from Beth Broderick) teaching two-step classes at the Broken Spoke. But if you're looking for local faces, keep an eye out for local musicians Jesse Dayton and Dale Watson, and KUTX's Laurie Gallardo in cameos. Plus there are plenty of familiar local actors like Elle LaMont (Strings, Flay, Mercy Black) and and Ashley Spillers (who made the delicious West Campus anti-noir Arlo and Julie and the now very-timely web series Distance).

Oh, and did we mention a score with cuts from Dayton, Watson, the Whiskey Shivers, Wild Child and more? Get more Austin than that and it'll come with breakfast tacos and cedar fever.

You can also read our 2015 interview with Johnson, "Dancing in the Dark," in which Caitlin Moore asked the filmmaker about how he was inspired by a real Brooklyn story to write this very Texas tale.

Don't forget, if you like what you see - or just really want to support the filmmakers - you can always pick up the film to keep via iTunes.

Now sit back, set that window to full screen, and enjoy Two Step.