SXSW Review: Once Upon a Time in Uganda

The true, crazy story of Wakaliwood 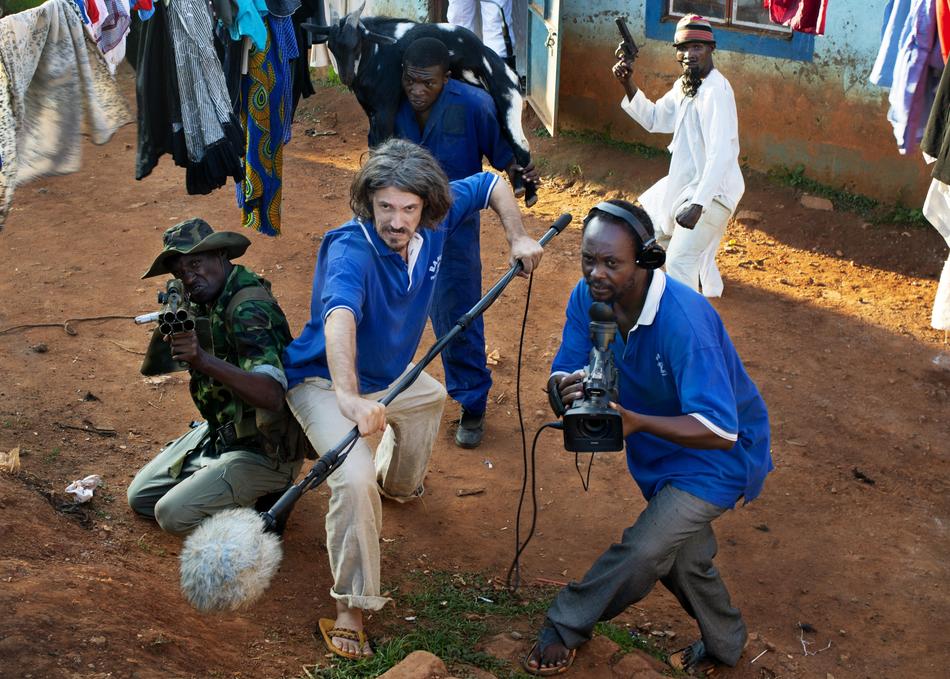 But SXSW-selected documentary Once Upon a Time in Uganda doesn't start in the African nation. Instead, it opens with a sweeping, epic shot of a mysterious figure atop a glorious, mountainous desert in Kazakshtan. He is Alan Hofmanis, an American actor who ended up in Wakaligo, a poverty-stricken neighborhood outside of the Ugandan capital city of Kampala, which is where he became the unlikely star of a series of zero-budget action films by writer/director/brickmaker Nabwana I.G.G., aka Isaac Godfrey Geoffrey Nabwana, the godfather of Wakaliwood.

How did Hofmanis end up in Kazakhstan? And what really is Wakaliwood? "It's like Hollywood, but better," explains VJ Emmie. That's your first signature of Wakaliwood - a constant, running commentary/heckle/audio description track that berates, explains, and cheerleads for the films (the VJ stands for video joker, and as Nabwana explains, "He put the fun in").

Directed by Cathryne Czubek (A Girl and a Gun) and co-directed by Hugo Perez (Neither Memory Nor Magic), Once Upon a Time in Uganda takes a trip to the open sewers and open hearts of the Ugandan film industry - such as it is. Cinemas, as Nabwana explains, are only for the rich, and everyone else has to make do with home-burned bootlegs of 1980s American action films. That's what inspired Nabwana to found Ramon Film Productions, and make his own entertaining movies with cheap cameras, volunteer actors, homemade effects, and an editing suite that he literally wired together himself - plus there's mad maker/prop master Dauda, whose sheer glee at getting to make movies is infectious.

What Nabwana made is unique, and it's something that Hofmanis (a former festival booker himself) fell in love with - as have other audiences. Wakaliwood films have become YouTube successes and film festival favorites (In 2016, Nabwana's Bad Black won the Fantastic Fest audience award, and since then both it and his followup, Who Killed Captain Alex, have both been released on physical media by the American Genre Film Archive as the Wakaliwood Supa Action Volume 1.

The cult status of Wakaliwood sometimes obscures that Nabwana and his collaborators love movies. Not just enjoy, but love in an unapologetic way. In a country that has defined "war torn" for decades, where life expectancy tops out in the mid-50s (which, as Hofmanis notes, is creeping up fast for I.G.G.), to bring this level of joy is an immeasurable gift. There's a moment when Nabwana shows some kids how celluloid works, and when he shines a torch through some frames on a wall, it's a true Cinema Paradiso moment, even if it's in a movie about Bowfinger-esque filmmakers.

But Once Upon a Time in Uganda isn't just a jolly depiction of a quirky bunch of outsiders. The increasing tension between Hofmanis (who sees the international potential in these projects) and Nabwana (who sees his job as building a Ugandan film industry) becomes a fracture point - but also a way to understand how these two oddball dreamers need each other. There's no white savior narrative here: in fact, it often seems like Hofmanis is looking for something to fill a void in his life, and he's lucky to have found these Ugandan dreamers. Similarly, there's no attempt to turn Nabwana's wife Harriet into some long-suffering victim of her husband's obsession, because she's just as obsessed.

Mixing fly-on-the-wall observation with behind-the-scenes footage and reenactments, Czubek and Perez remain respectful, and even a little awestruck, while also understanding that Nabwana just wants everyone to have a good time. That's what makes Wakaliwood, as they say, Home of Da Best of Da Best Movies.