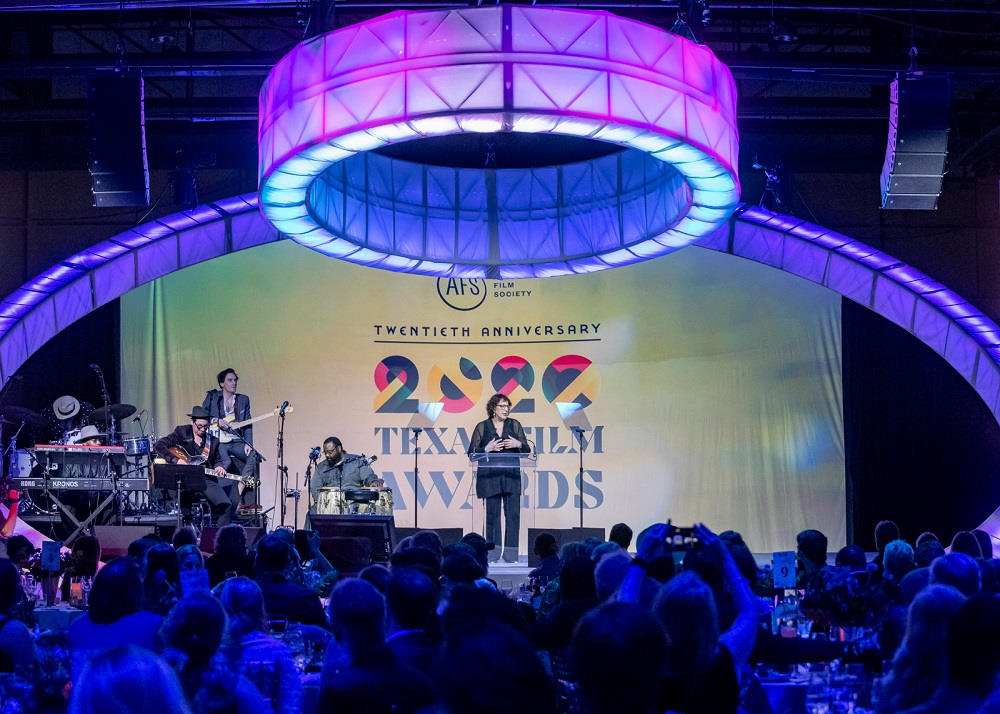 SXSW Film Festival director Janet Pierson at the Texas Film Awards last night. The festival has now confirmed the awards will still happen, and films will still be eligible for Oscars and Independent Spirit awards at the end of the year. (Photo by Maggie Boyd/Austin Film Society)

Getting selected for SXSW Film 2020 still counts: that was the strong message sent to the moviemaking community this morning by SXSW Film Festival Director Janet Pierson as she explained the next steps for those filmmakers affected by the festival's cancellation due to coronavirus fears.

The first major news in her statement is that the 2020 SXSW juried film awards will still go on. Virtually all the eligible filmmakers have agreed to let the juries have access in all categories - including the special ones - and will be announced on Tuesday, March 24. The Grand jury awards will still be selected for narrative and documentary feature, as well as jury awards for animated, doc, narrative, Texas and Texas High School shorts, episodic pilots, and excellence in poster and title design. The festival will also continue with its six special awards: the Adobe Editing, Adam Yauch Hörnblowér, Final Draft Screnwriters Award, Vimeo Staff Pick, Zeiis Cinematography, and Louis Black "Lone Star" prizes.

Going forward, filmmakers will also be able to give press, buyers, and industry representatives (or any combination of that list) access to their films through SXSW's Shift72 platform for what would have been the festival dates (March 13-21). The festival has increasingly put an emphasis on acquisitions over the last few years, and this portal is planned to continue connecting projects with future distribution.

Pierson and her team have also been able to confirm that the festival will also still be a qualifying venue for consideration for national awards later in the year. All features will be eligible for the Film Independent Spirit Awards, while the winners in the short animated, narrative, and documentary awards will be eligible for Academy Awards in their relevant categories come Oscar season.

UPDATE SXSW has also confirmed that all films will be able to keep their SXSW 2020 laurels, meaning everyone will always know that the festival selected and celebrated these works.

Faced with the cancellation of SXSW 2020 by the City of Austin because of health risks associated with COVID-19, the SXSW Film Fest immediately hunkered down to figure out what could we do to help and support the filmmakers whose work we love so much, and who put their trust and faith in SXSW for their launch. Many of them have spent years on the work they were bringing to SXSW.

This was going to a transformative event, and with the cancellation, the filmmakers were left stranded and scrambling. We had several Special Awards juries already in place via links, and since we are not able to present the event, we decided to continue and expand to all the juried competitions, if the majority of the filmmakers opted in and juries were available. We know it’s no substitute for the live SXSW event with its unique and fantastic audience, but at least it’s some way to get attention for these wonderful films.

SXSW is proud to be an official qualifying festival for the Film Independent Spirit Awards and the Academy Awards® Short Film Awards and has confirmed with both organizations that given the extraordinary circumstances that SXSW’s qualifying status still stands.

We have also arranged for filmmakers to opt-in to our Shift72 secure online screening library with options to make available for press, buyers, industry, or combinations of these audiences. It will launch on Friday, March 13 and run through Saturday, March 21.

We have been heartened by the efforts of so many in the film industry and wider film community to come together with offers to help SXSW projects by offering screening rooms, fee waivers, and so many ways. We are continuing to explore other ways to support the paths of the SXSW 2020 Official Selection films and filmmakers in this new environment.