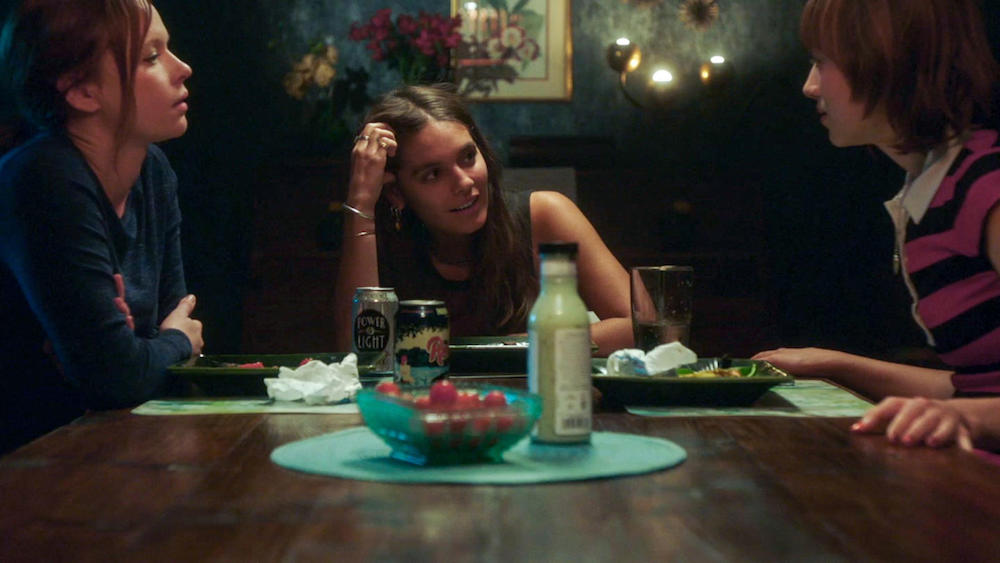 Everybody has that friend, according to filmmaker Lucky McKee. "Every person has someone who has stepped into their life, whether it's a friend or a family member, who has tries to suck all the energy out of the room. They're like emotional vampires. Everything has to be about them, and they like to just stir shit."

In Kindred Spirits, his new Austin-made darkly comedic psychothriller, that chaos engine is Sadie (Caitlin Stasey) who appears out of the blue at the home of her sister Chloe (Thora Birch) and niece Nicole (Sasha Frolova) after disappearing for a few years. But the joyous family reunion doesn't last long as Sadie turns the suburban norm into a nightmare that all revolves around her.

After a special one-night broadcast on Lifetime Movies last October, Kindred Spirits has arrived on VOD and Digital HD. For McKee, it's a special opportunity to say thank you to Austin as the city that helped support his work from the beginning (his first feature, May, played in theaters here longer than any other city) by bringing work here. He said, "There was a couple of scenarios when I was going to shoot there, but they didn't pan out. So when this opportunity appeared I just jumped on it."

Austin Chronicle: I'm of the conviction that one of the great underrated pieces of American art is Peyton Place. You want to look for the perfect depiction of suburbia as weird and unpleasant and filled with secrets, that's the wellspring. This really has that same vibe.

Lucky McKee: I was really pulling from movies like that, and particularly Shadow of a Doubt which is one of my all-time favorite Hitchcock movies. There's a big influence there, of that underbelly of suburbia, "What's going on next door?" type stories.

AC: And you invert the trope of having the POV be the enquiring ingenue acting as the guide to the mystery, and instead put the audience right alongside Sadie as she careens out of control.

LM: I always think that it's interesting to give the audience more information than the characters. I think that helps create suspense, and make them feel complicit in a way. It's something me and [writer Chris Sivertson] have talked about in the past, giving the audience a little more information than is typical early on so you can enjoy the premise without being too cheeky about it.

“That’s the fastest a movie has ever come together for me. I literally called the producer and a week later we were in the process of figuring out how to make the movie.”
AC: You and Chris have known and worked together for years ...

AC: So how did this latest collaboration come around?

LM: We'd both been working with this producer, Mike Moran, who was working with this company Maravista that we ended up making this for. We'd both separately written scripts for them, and Chris had directed a couple of movies for them. It was getting towards the end of the year, I was just dying to make a movie, and some of the personal stuff that I was working on was going to take a little bit of time. So I just called the producer and went, "I know you have six movies that you're going to shoot before the end of the year. Do you have any that we can knock out?" and he said, "Yeah, I have one written by Chris." "You've got to be kidding me." So I read it, and it fit me like a glove.

That's the fastest a movie has ever come together for me. I literally called the producer and a week later we were in the process of figuring out how to make the movie. And Chris and I, we've been making movies together since we were teenagers, so we have an understanding. When I read his script I see a lot more than someone coming cold that doesn't know him. We share a similar dark sense of humor, and it's a very specific sense of humor when it's the two of us together. So it just felt like the right thing to do.

AC: It's adds so much that you catch the humor, because it would have been very easy to make this as a straight-ahead cuckoo-in-the-nest horror.

LM: That's the difference. I think Chris' writing is very funny in a subversive way, and he gets this tone with a kind of melodrama that we both find incredibly amusing.

I learned when I made The Woman, when I wrote that script with (Jack) Ketchum I went, "Oh, this is going to be dark as hell, the most serious thing I've ever done." And then we started shooting the movie, and the sense of humor started bubbling up out of it, and I went, "Well, I guess that's my thing," so I relented to that and accepted that that's always going to be part of what I do. There's going to be a dark sense of humor about things.

AC: And there's a lot of your earlier film May in here as well, especially in its depiction of a female protagonist breaking down – although May is a lot more compassionate about her.

LM: We kept saying when we were making it that we were having heavy feelings of May-ja vu. When there's a third girl staring in the mirror, I was having 'Nam flashbacks. There's definitely some sort of emotional link there. I've definitely made a lot of movies about disturbed people. Maybe that says something about me.

AC: You mentioned giving the audience more information than the characters, and it's pretty clear from early on that there's something awry with Sadie. It's not just the performance, but how you shoot her as well, like she's not really confined by the same rules of time as everyone else, or not even quite confined by the edges of the frame.

LM: One big aspect of that was when we choose to cut to her, and the lighting we implemented. We used a lot of odd lighting and strange patches of sunlight passing through windows and window frames. We even did a lot of stuff where we were reflecting light into broken glass and throwing these strange patterns on the wall, just giving it this jagged feeling. We didn't make her up like a doll. We tried to give her a natural look, without any makeup, and there's this kind of oily feeling about her. You can't make Caitlin not beautiful – that's an impossible thing – but we did all these things to make her look like she'd been on the road. Just give her rough edges when we could.

At the same time, even though she's doing bad things, we try not to be judgmental because the character does what the character does. You don't have to explain all that stuff, but it's good for Caitlin to know what's going on underneath.

AC: And you give Caitlin the space to go bigger in the performance.

LM: I pushed her in that direction. Most of the roles she plays are very casual and cool, and I wanted those elements in there but I wanted her to have fun being this diseased spark plug in the middle of the story that's causing all these dramas. A lot of people's take when they look at that kind of material would have been more what you expect, but Caitlin comes at things from a different, sideways way.

There were a lot of takes, especially when she was cocking the little girl voice – how she changes her voice when she's talking with teenagers and all these odd little moments – I was really pushing her to do those things. Usually there was one out of every five or six takes where she actually got it because she was nervous about it and unsure about it, because it was unnatural and stylized. But it was fun to push her to that place, and ultimately she got it. 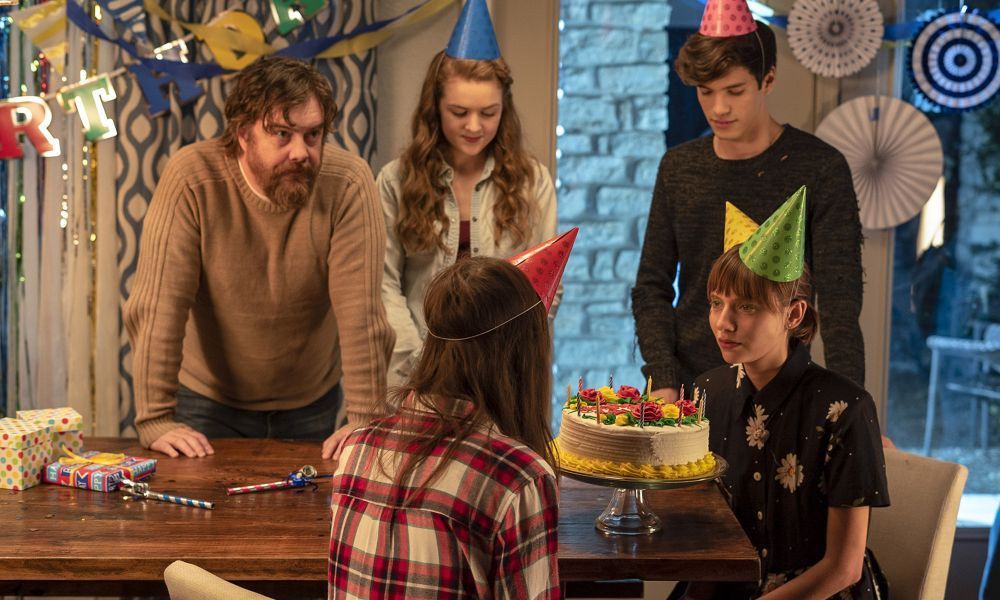 AC: So how was it finally being able to shoot in Austin?

LM: I love the vibe of that town, and the crew was unbelievable. The best crew I've had in quite some time, probably in 10 years, and I've worked all over the place. But everybody got that it's a small movie, and they didn't work any less hard.

We only had 15 days to shoot that movie, and 148 scenes in 15 days is a lot, but we got some good favors. My friend Aaron Koontz, who's got Scare Package and his horror Western The Pale Door coming out, he lives there and he's such a good guy. He let us use his house, and that's where we shot 75% of that movie. He let us drill holes in his walls and paint, move stuff around. Just gave us the keys and walked away, and that was crucial to us pulling off the movie. He was like our big angel, and we felt so welcome there.

AC: You also got to use another Austin asset: Macon Blair.

LM: Isn't he a wonderful person? He's special, man, a very deep human being but at the same time he doesn't take himself or anything going on around him too seriously. He has a really good sense of humor and was cracking us up the entire time. He and I are pretty much the same age, maybe six month or at most a year between us, so we grew up around the same time and it's one of those situations where you meet someone and you feel like you've known them a long time.

AC: He's an interesting counterbalance to Caitlin, because Sadie has to act like she owns the place but his character, Alex, always has to feel like he's trying not to be an interloper.

LM: There's something built into just his look. When you see his face and you see his eyes, there's a sensitivity there, a comfort that you respond to in just his appearance. He doesn't have to overdo it. He's also technically excellent, which is huge when you're on a low budget and you're going really fast. He knows where the lenses are. All that stuff that's built into the great actors, he has that.

Kindred Spirits is on VOD and Digital HD now.