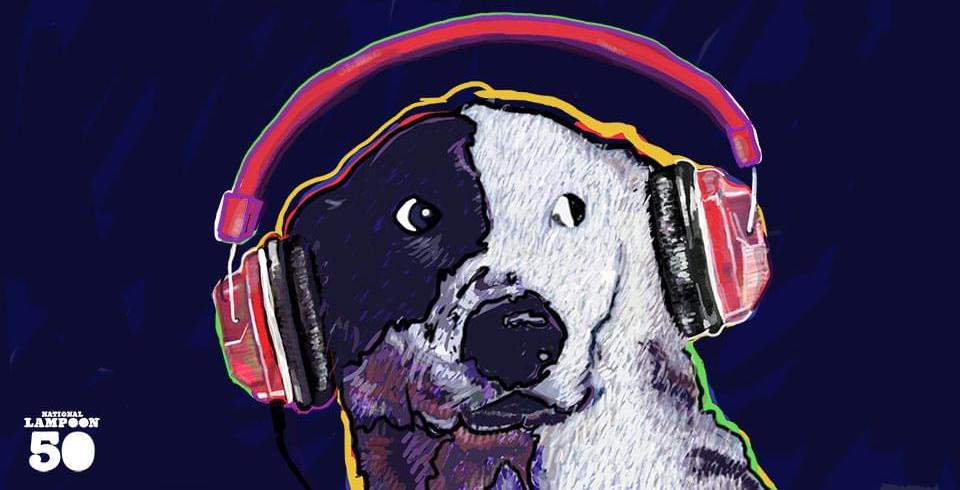 Listen to this podcast or the dog gets it: National Lampoon resurrects its classic Radio Hour show for the streaming era at SXSW Comedy.

When it comes to comedy, there aren't many brands as famous as National Lampoon. Yet the collective that shot John Belushi, Gilda Radner, and Chevy Chase to fame has had a rough few years. Now it's back as the National Lampoon Radio Hour: The Podcast, and the sketch show has announced a pair of shows at SXSW.

For Evan Shapiro, president of National Lampoon, it's an important part of bringing the mayhem machine back into the national eye, and there's a personal buzz, too. He admits to being "obsessed" with SXSW, having attended 16 times and being a sponsor via IFC for 10 years. "So the idea that we can celebrate our 50th anniversary at SXSW for National Lampoon Radio Hour, well, I hate to use the cliche dream come true, but it's a wet dream come true."

Like most people who grew up in the Seventies and Eighties, National Lampoon held a special place in warping the mind of the young Shapiro. For some, it was the original magazine. For others, it was from the films like Animal House and the Vacation series. But for Shapiro it all began when he was a kid at camp in the late Seventies, and that's where he first heart an album of the radio show. He recalled, "My camp counselor had a mustache so he was the coolest person in the world. He would play this stuff on this turntable on this mono speaker on this wooden bunk in the middle of literally nowhere in Pennsylvania."

“The idea that we can celebrate our 50th anniversary at SXSW for National Lampoon Radio Hour ... it’s a wet dream come true.”
The original The National Lampoon Radio Hour launched on November 17, 1973, a spin-off from the Harvard-born National Lampoon magazine that carried all the print version's irreverent, often caustic humor. Running for just over a year (for most of which, oddly enough, it was only a half-hour long), it was an unexpected blast of chaos on the airwaves at a time when most American humor was safely contained in the friendly restrictions of the 22-minute multi-camera sit-com. Its influence was enormous - not least because much of the team ended up being poached as the opening roster for Saturday Night Live. For Shapiro, the show was the height of National Lampoon as a cultural landmark. "They put out five albums' worth of material from that one show, and then the entire cast and writing team was stolen and put into Saturday Night Live. Then the brand went out and a couple of movies that have become iconic in and of themselves. Then [cofounder] Doug Kenney fell off a cliff looking for a place to jump, and the brand kind of lost its way."

When Shapiro was given the job of re-energizing the increasingly moribund brand, the radio hour became the obvious first component to resurrect. As an Emmy- and Peabody-winning producer who took over development at the Lampoon last May, he definitely knows a thing or two about refocusing a comedy brand, having already taken the Independent Film Channel and given it new life and direction as the more humor-heavy IFC.

But he also wanted to make sure it felt like National Lampoon, and that meant considering what being National Lampoon really mean. "That was the first assignment I tackled," said Shapiro, "not what do we do, but who are we, and why hasn't it worked in the past when other people have tried to do it?" With Lampoon, it turned out to be a pretty simple task. "When you put all the strands together, there's a thesis that emerges like A Beautiful Mind ... Lampoon's most successful things are all mainstream satirical commentary - what I like to call twisted mainstream. It's not about a small thing, a thing that's super-precious that's specific to one region or area or group. It's a comment on us, the American people."

He uses the example of National Lampoon's Vacation, which is just the classic American road trip. Except, he added, "In our version of family vacation, we kill grandma, we drag the dog behind the car for 20 miles and destroy it, and dad's looking to get laid. ... To me, that is quintessentially Lampoon, when we take everything that is America, and urinate on it." The all-new National Lampoon's Radio Hour: The Podcast team, coming to SXSW Comedy
The next task was assembling a new cast, and he looked to people he knew - and knew were funny in a sketch environment - starting with chief writer Cole Escola (who Shapiro called "the greatest sketch comedy writer working right now") and senior writer Jo Firestone, who lead him to other talents including Meg Stalter, Brett Davis, Alex English, Aaron Jackson, Rachel Pegram, Lorelei Ramirez, and Martin Urbano. Like the original cast, everyone writes and performs, and like the originals, they're some of the best around. "When you talk to other comedians about our cast, they say, 'It's the '27 Yankees.'" That's a sentiment echoed by Charlie Sotelo, Head of SXSW Comedy. He said, “The original cast of ‘National Lampoon Radio Hour’ were gifted up-and-comers who went on to become some of the most influential comedians of their generation. In that tradition, National Lampoon has assembled a brilliant group of performers and SXSW Comedy is honored to showcase this dynamic new cast."

Comparing the new Lampooners to the first class of the Radio Hour, Shapiro called them "the next great comedy minds, and they're doing experimental work that is in keeping very faithfully with the work that was being done back then. While the minds and the points of view are very much different and more diverse than that original group, the idea behind it [is still] that we would lampoon the mainstream culture and Americans themselves."

But it's not just about bringing National Lampoon back. Shapiro sees the sketch show as being endangered. No exaggeration. "Sketch comedy in the United States is on life-support," he said. In the middle of the last decade there was Key and Peele, Inside Amy Schumer, Broad City, Kroll Show, and one of his biggest successes from his time at IFC - Portlandia (plus constant re-runs of Kids in the Hall and Monty Python's Flying Circus). Now, he said, "There's a couple of small shows on Netflix, Saturday Night Live, and almost nothing else." Even Escola, he noted, didn't really have a broadcast platform to create sketches, and was doing them on Instagram and Twitter. Instead, the tyrannical sitcom rules supreme again on television. "One of the worst things that ever happened to comedy was forcing it into a 22-show season," Shapiro added. "It's very hard to do biting comedy for eleven-and-a-half hours per year."

So while National Lampoon Radio Hour: The Podcast is a half hour, the sketches can run from mere seconds to long, recurring bits (the very first episode includes a brutal and bloody pastiche of The Bachelor that cuts back in and out). For Shapiro, that brevity is everything. "You can shoot truer to the heart of satire in a short form."

‘National Lampoon Radio Hour: The Podcast LIVE will be at SXSW Comedy March 15 and 16. Listen to the series streaming on Spotify.