No Knives Out for Rian Johnson Chris Evans, Ana de Armas, and Rian Johnson on the set of Knives Out

There's a myth that successful filmmakers gets every project made. Yet even after Star Wars: The Last Jedi, there were still some question marks about Rian Johnson making a murder mystery. He said, "When I wrote it, I had trusted people that I'd show it to, and they enjoyed it. But I did get a few people saying, 'Why would you make it?'"

Well, the doubters have been proved wrong by the success of Knives Out. The story of a dead mystery writer, a family of ne-er-do-wells all scrabbling over his inheritance, a nurse (Ana de Armas) with a secret, and a mysterious detective (Daniel Craig) was directly inspired by the Agatha Christie adaptations Johnson watched when he was growing up. Most especially, it was shaped by those starring Peter Ustinov as Hercule Poirot, like 1978's Death on the Nile and its 1982 follow-up, Evil Under the Sun. Johnson said, "They're fun. They're a party. It's not a parody, it's not Clue – and I love that movie – but it's not about parodying a genre. You're going to get a good mystery, but you're also going to get an all-star cast that you're going to enjoy popping up on screen, and every one them is going to be having the time of their lives, doing this caricature massive performance."

Austin Chronicle: When Avengers: Infinity War came out, I compared it to A Bridge Too Far, because everyone is in there. But it's a tradition that's died in Hollywood, of having a film which is all stars rather than being a vehicle for a star.

Rian Johnson: The ensemble, absolutely, The Last of Sheila did it in the Seventies. I enjoyed The Murder on the Orient Express that they just did, and they too some extent did it. But this notion of the all-star circus, like Battle of the Network Stars, that being a true pleasure.

And the fun thing with this was, when we went out with the script and tried to get actors for it, just how many great actors recognized that and were game for it and were ready to jump in and be part of this ensemble, and recognized, "Oh, this is what this is? This is really fun! I haven't seen this in a while. Let's do it!" That was the first sign of encouragement.

AC: And it gives them a chance to step back and be character actors.

AC: Seriously, is there anyone out there better than Stephen Tobolowsky?

RJ: Oh my god, that dude's amazing. We were just watching Deadwood when he pops up, and of course he's in that, he's fantastic. Or M. Emmet Walsh. You want to talk about the definitive, definitive character actor. Emmet, when he turns up on set, he hand out $2 bills to everybody and says, "If you never spend it, you'll never be broke." Steel pennies, back from when they were manufacturing pennies out of steel during the war, and he hands out his resume. It's a single sheet of paper, single line typed, filled with the movies he's been in. And even if you think you know how many films Emmet Walsh has been in, you read that list and you think, "Holy shit. This guy has been in everything."

AC: With whodunnits, the engineering of them is always fascinating. When I've spoken to people who've done them, they split between two approaches. Either you work out where you want to get to and retro-engineer the path to the end, or you go in with a flow chart and work everything out from first principles. Well, three, as obviously you can go The Maltese Falcon route and throw logic out of the window. When you were starting to build this, how did you approach this from a script construction view?

RJ: I do the same thing with all my movies. I start in a very structural way, I start very zoomed back, and it was the same with this. Even before I knew the specifics of how the murder was going to be committed, I knew, 'What if it's a murder mystery where A leads to B leads to C, and that's the twist." So I zoom in a little bit and go, OK, it's a murder mystery writer, and it's these kind of characters around him, and the murderer is somebody like this, but the story is told that way. You zoom in bit by by bit, and when I've done 90% of the work is when I then sit down to write the script, and that's when the details of when you flash back to when start happening. At that point, you hopefully have the whole arc in your head so you know what you're leading up to.

The appealing part of the murder mystery is that from the birth of the genre it's been meta, where it's almost like a time travel movie because it's operating on two timelines. There's the investigation in the present day, and there's dipping down into subjective views of this alternate timeline of the night of the crime. It's one timeline constantly investigating another timeline – which, for someone who loves that shit, is fascinating.

AC: That's part of why Looper is so great, because you set yourself the challenge of a crime drama and a time travel story at the same time.

RJ: But unlike Looper, in a whodunnit you can't say, "The clues don't matter." "He is a little pompous, and refers to himself in the third person a little too easily." Rian Johnson on Benoit Blanc, the consulting detective played by Daniel Craig (left, with Noah Segan and LaKeith Stanfield) in Knives Out

AC: Part of what's fun here is that you play with absolutely every convention of the genre as it originally evolved. The mansion, the old man dying in a locked room, the family fighting over the will.

RJ: Everything old is new again.

AC: But part of why it died out was that it had become hidebound, so a film like Clue can exist because we all know how the game is played. So what was your approach of reintroducing people to the tropes without feeling tropey?

RJ: There's two things to it. One is that they're tropes from murder mysteries, and they're things I dearly love and I just wanted to do: but they also serve a purpose. They help orient the audience, and that allows you to go further out on a branch in terms of where you take the story, the twists, the unexpected things that happen. The more an audience feels they know what this is, the more they feel like they have a safety harness.

The other thing for me, in regards to genre in general, I start by figuring out what the essential thing is I love about a genre, what it is that I really adore about it. Then I set that as my destination and figure out my own way there. I guess I try not to think, "Am I copying an old trope?" As long as I know this pure place I'm trying to get to and what this thing means to me, and I'm finding my own way there, I just have to trust that I'm not retreading old paths.

And it's what you said – the moment that we're putting this out. It would be a different thing if we were putting it out when every other film coming out had a drawing-room murder and a will scene. These are things we haven't seen in a while, so they're pleasing in that way. Hopefully they're employed in the pursuit of something we haven't seen before.

AC: And part of why it works here is because, especially in Agatha Christie's work, of the detective as presumed bumbler. Everyone underestimates Miss Marple because she's old, and Poirot is this grumpy, overweight Belgian that even Christie hated by the end. So there's a tradition of creating the bumbler who turns out right, and you do that with Benoit Blanc. How did you find his fallibility?

RJ: It was tough, because I gave a lot of thought to all those elements of the classic detectives you're talking about, and it felt like I was hitting a wall. Everything I came up with, it felt like karaoke. It felt like me going, in a very calculated way, "He's like Poirot because he's like this but he's that." So at the end of the day, I kind of let all that go. I wrote the character straight forward in terms of his place in this mystery, then tried to find his voice and layer it in. He is a little pompous, and refers to himself in the third person a little too easily.

For me, I tried not to lean too hard into what his quirk was. I just wrote the character, and with Daniel we kind of figured it out.

Knives Out is in cinemas now. For review and listings, visit our Showtimes page. 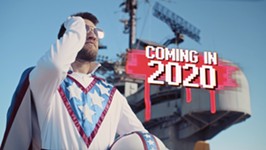