A recurrence not at Owl Creek Bridge, again and again 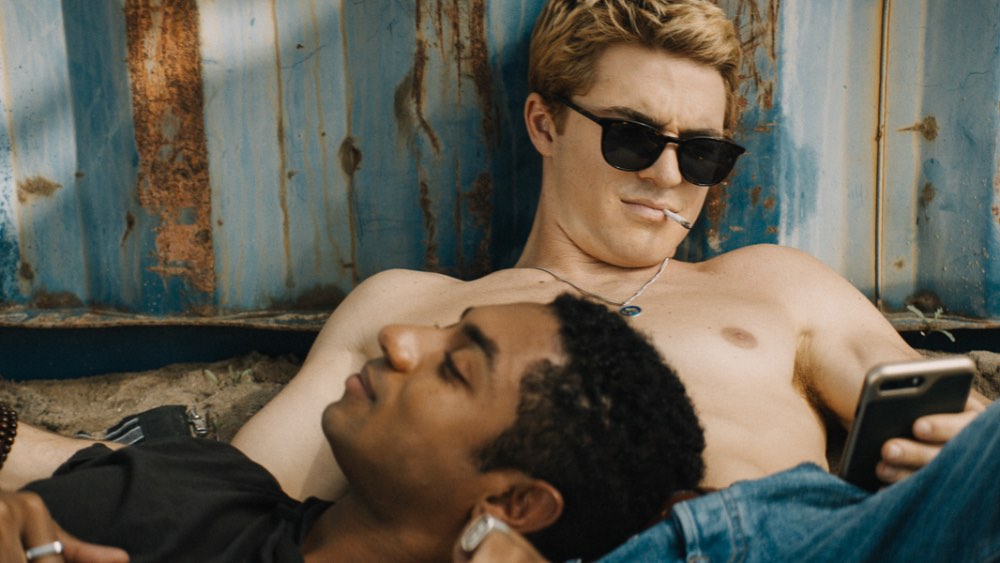 Tunde has a problem and he’s running out of time. No, scratch that. Tunde’s problem is time. Specifically, May 28 and the one single moment in that day during which he’s murdered by trigger-happy police. “Hands up, don’t shoot!” and #blacklivesmatter are about as effective as a kevlar tinfoil vest against this nightly onslaught of death by cop.

And it is nightly, or at least every time after he’s shot Tunde startles awake, shaking and terrified, yet safe and sound in his own bed in his family’s house.

Yes, The Obituary of Tunde Johnson is a time loop movie, but as you quickly realize, director Ali LeRoi’s debut feature is as far from Groundhog Day (or for that matter any of LeRoi’s television work (Everybody Hates Chris, Are We There Yet?) as you can get. After all, another word for a “loop” is “noose.”

As played with simmering, hesitant passion by Steven Silver, Tunde is a young black man, quiet, introspective, and gay. Indeed, ne of the film’s many key, reiterating sequences has Tunde coming out to his Nigerian-Americans parents: his erudite father Ade (Sammi Rotibi) is a highly respected artist whose paintings command top dollar and Tunde’s mother Yombi (Tembi Locke) is the very picture of concerned maternal support.

Given his family’s wealthy, upper middle class life, Tunde attends a nearly all-white private high school where he’s unable to completely avoid the occasional racial slur. You can tell it’s an upscale academy by the sly fact that the casual racism comes not from cinema-standard football jocks but from members of the school’s lacrosse team, who idle drop epithets along the lines of “Hey there, Wesley” (as in Snipes, as in Blade) when they’re not goofing around and peacocking for the members of the hot-chick clique. There’s one member of the team though, a blond adonis named Soren (Spencer Neville, currently seen in American Horror Story: 1984), who also has a secret, or two: he’s both Tunde’s lover and completely closeted boy toy to Tunde’s best friend Marley (Nicola Peltz). This complication sets up an interesting — if not all that unusual for contemporary high school les liaisons dangereuses— love triangle that both evolves and dissolves depending on the specificities of Tunde’s nightly demise. “I keep seeing red,” muses Tunde’s father, pondering how best to capture the essence of black masculinity with his next painting.

Writer Stanley Kalu, whose script won the million dollar Grand Prize for the 2018 Launch screenplay competition while at USC, has packed a great many ideas into this tightly woven film. Tunde seems to barely recall the day before the day he dies whenever he awakens in a cold sweat, alive, but Silver’s exacting execution of the character’s jangled nerves and anxieties registers in the subtle changes in facial expression and attitude. Tunde gobbles Xanax like it’s candy and there’s a brief mention about hallucinations being a possible side-effect of benzodiazepine consumption, which begs the obvious but unanswerable question Is it all a bad dream? (It’s notable that Tunde’s end-of-life life shadow-mirrors any number of Rod Serling’s “Presented for your approval…” twilit morality plays, not to mention Jordan Peele’s similarly social and racial justice-charged filmmaking and acting.)

Like Mia Farrow’s gravid Rosemary shrieking her dawning realization that “This is no dream, this is really happening!” The Obituary of Tunde Johnson takes an eerily unique and effective aim at the ongoing slaughter of young black men by white police officers. Tunde stands in for those whose keening obituaries we’ve already read: Trayvon Martin, Stephon Clark, Alton Sterling, Walter Scott, and on, and on. Whose streets? Not those. That’s a dead end.

The Obituary of Tunde Johnson