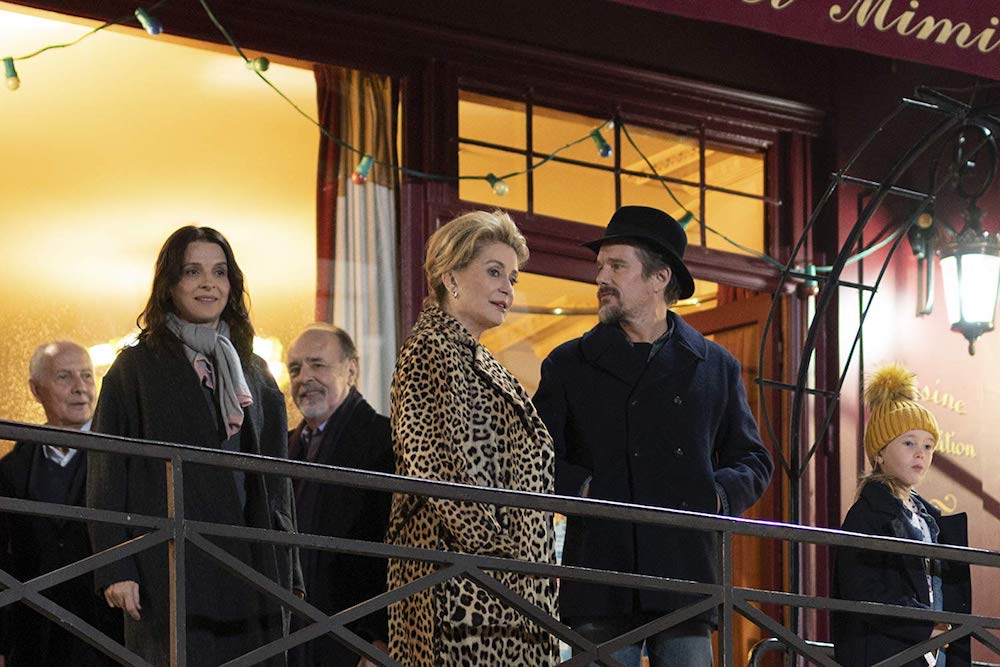 Japanese filmmaker and Palme d’Or winner Hirokazu Kore-eda is a master of finding little truths among a family unit – except that in his latest, The Truth, he’s unable to weave them together. As Catherine Deneuve’s character Fabienne says frequently when referring to her tea, Kore-eda’s cross-language attempt at a French drama is “lukewarm.”

The Truth begins like a mirror to an Olivier Assayas film, opening with an interview being conducted with Fabienne, a great French actress who has recently published a book about her memories. It’s charming, but slightly painful, watching the journalist (Laurent Capelluto) stumble through his questions with the dismissive Fabienne who cannot even remember which one of her colleagues has passed away and which one is still living. The session is soon interrupted by her family – daughter Lumir (Juliette Binoche), husband Hank (Ethan Hawke), and granddaughter Charlotte (Clémentine Grenier) – who are there to celebrate her publication.

The family banter is light but cutting, especially between Fabienne and Lumir. The publishing of Fabienne’s memoirs has brought up some dark memories, including the death of a very close family friend and fellow actress, Sarah. Juxtaposing the family visit is the production of Fabienne’s latest film: a sci-fi drama titled Memories of My Mother.” The starlet on the rise playing the leading role in the film, Manon (Manon Clavel), has been lauded at the next Sarah, from her looks down to the tone of her voice, and is both a catalyst for pain and a cleansing force for Fabienne and Lumir.

The Truth is, predictably, a movie about lies, but more so about memory and perception. It’s an ambitious feat for Kore-eda, but in that ambition a lot of his ability to write a tender family drama, such as his Oscar-nominated Shoplifters, is muddled. Nevertheless, he’s able to wrangle together all of his ideas in this layered French family drama to create a ponderous film about forgiveness and acceptance.

The Croods: A New Age
Pointless prehistoric sequel hasn’t evolved at all

Coded Bias
How computers are absorbing racial and gender bias ... and what we can do about it