Ha-Ha-Hitler: The Importance of Mocking Nazis in Jojo Rabbit 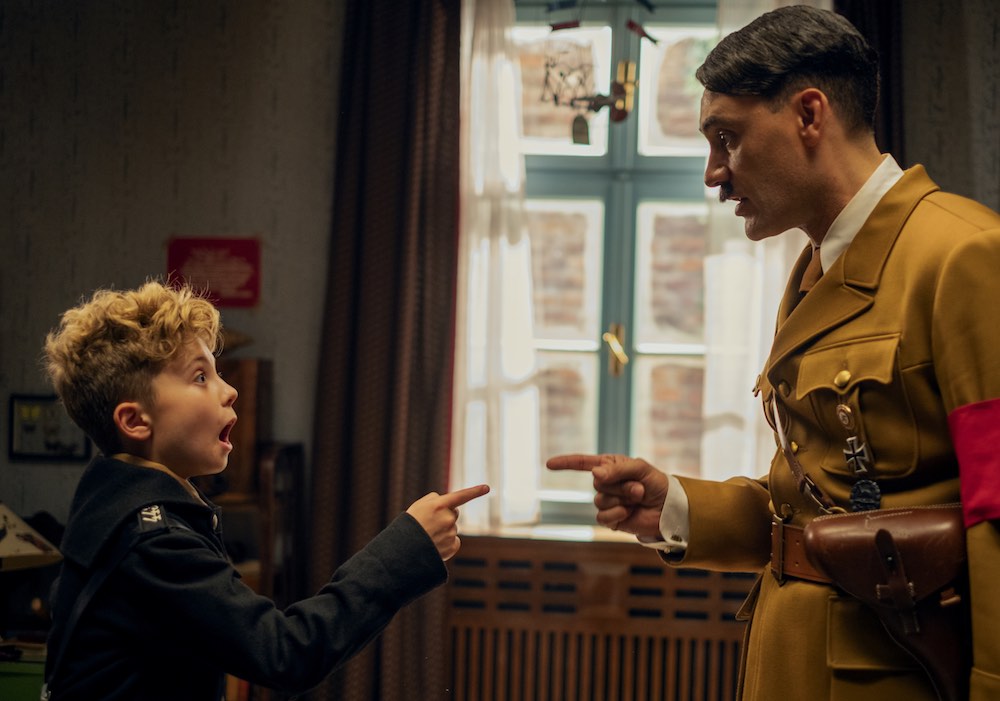 "Didn't Charlie Chaplin make a movie in 1939?" Taika Waititi looks back on the long history of making a chump of Hitler in Jojo Rabbit. The film stars Roman Griffin Davis as the innocent Jojo, while Waititi himself provides der Fuhrer's face.

If you can't laugh at evil, what can you do? That's the message of Jojo Rabbit.

The latest film from writer/difrector Taika Waititi (Thor: Ragnorok, What We Do in the Shadows) adapts Christine Leunens’ novel Caging Skies. It's the story of Jojo (Roman Griffin Davis), a young boy in the Hitler Youth in the closing months of World War II, who discovers a secret: his mother (Scarlett Johansson) is hiding a Jewish girl (Thomasin McKenzie) in the attic.

Leunens' novel focuses on Jojo's inner struggle as he starts to realize that the propaganda he has swallowed is nonsense. In Waititi's film, that struggle is given the form of his imaginary friend – the director himself as Hitler.

Yet there's been a degree of backlash about the idea of making fun of Hitler, as if that diminishes the seriousness of the Nazi plague – moreover, as if Waititi is the first person to think of doing so. But for Waititi and Stephen Merchant (who plays a Gestapo officer in Jojo), making a clown of Der Fuhrer and his acolytes isn't new or radical: it's part of a comedy canon of cutting fascism down to size with gags.

Austin Chronicle: Considering everyone from Walt Disney to Dr. Seuss to Phillip K. Dick has made fun of Hitler, it's odd you've faced a backlash.

Stephen Merchant: Making fun of Hitler and the Nazis seemed like a long tradition, particularly in British comedy. Whether it was a comedian like Freddie Starr going on a talk show and talking about Hitler, or Spike Milligan writing Hitler: My Part in His Downfall, or Basil Fawlty goose-stepping when he meets Germans, it just seemed like it was this perennial subject for jokes. So it was interesting to me that when Taika was announced as making this thing that people were jumpy about, oh, can we make fun of this thing. I was surprised, because there's a long tradition of mocking this person, of seeing the comically absurd part of this tragedy. So I was quite surprised that people were up in arms.

Taika Waititi: Me too. Didn't Charlie Chaplin make a movie in 1939?

AC: The other is on the kitchen wall.

SM: I heard "The other is in the Albert Hall."

AC: But in that tradition there's always been some pushback. Mel Brooks got into trouble for doing "The Hitler Rap" in History of the World Part One, but then he made The Producers, which is a comedy about how you're not supposed to mock Nazis. I think it's particularly an issue in America.

TW: They're very sensitive over here. In America, jokes have to be explained quiet thoroughly, and I feel like with this film the comedy needs to be less obvious when you're coming from New Zealand and the U.K. But over here – and I think for good reason – you have to be sensitive.

SM: I think there's also an assumption among certain people that if you use humor to tackle a big or serious idea, that somehow you're treating it less seriously. That by humor to talk about, say, anti-Semitism that you're either yourself being anti-Semitic, or treating it lightly or you're being disrespectful to it. Whereas to me, and I can talk as a Jewish person about anti-Semitism, a lot of my comedy heroes who were Jewish used humor to mock this very thing.

I always think about this letter that Groucho Marx wrote when his daughter went to a Beverly Hills country club and wasn't allowed to swim in the pool with friends because her father was famously Jewish. He wrote, "I noticed that you wouldn't let my daughter in the pool. I'd like to point out that she's only half-Jewish. Can she go in up to her waist?" The brilliance of that is that he's not up in arms, writing an angry letter. He's absurdly mocking the fundamental nonsense of prejudice. When you pull the thread of it, it falls apart. Yeah, can she go up to her waist? What are the rules? And for me, that's a great example of using humor to dig into the nub of something. 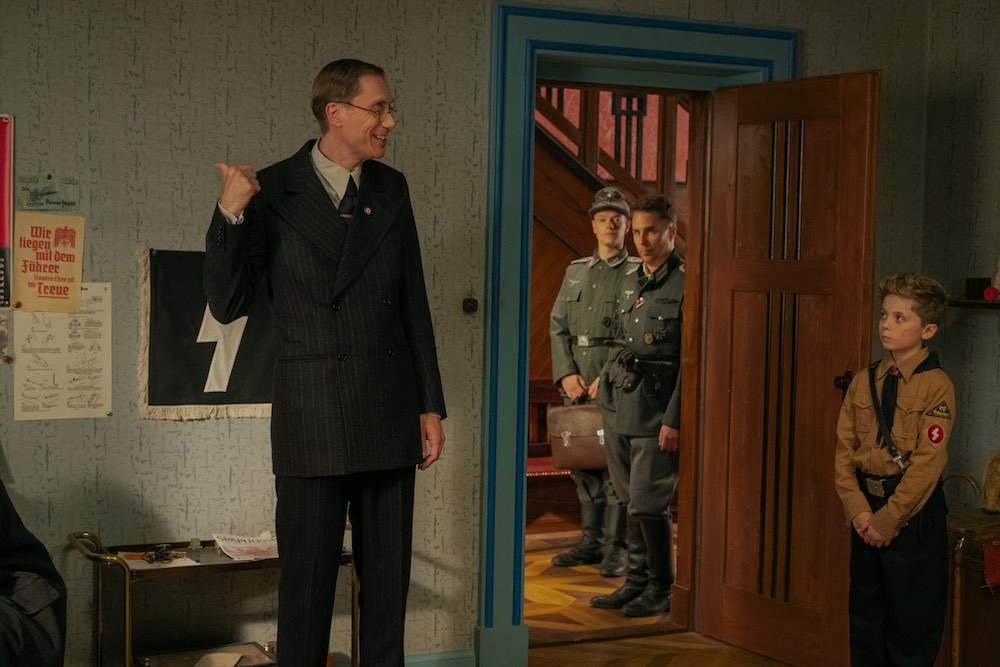 "If you had been one of those people who venerated Hitler, when you got word in passing, 'Oh, yeah, he killed himself,' your whole world would disintegrate." Stephen Merchant on unraveling hate in Jojo Rabbit.

SM: Yeah, but some people don't think that's appropriate. It's maybe one of the reasons that humor is rarely rewarded at the Oscars. Except this time, am I right?

AC: One of the things I think people expect with this film is that, because you're playing him, there's going to be a lot of dream Hitler. But you're actually very sparing with him.

TW: Yeah. You don't want to get sick of him, and there's definitely a danger with a character like that that, if he's there in every scene and he's always saying stupid things, then you are in danger of not taking it seriously, or not having the conversation that you want to have.

AC: You definitely pull back in the second half, which means a balance between having him there as a factor in Jojo's mind but not relying on him as a comedy crutch.

TW: It was always very easy, if we needed to, to put more in. Sometimes we would run scenes and if I had the costume on, we would do the scene normally and then I would go sit in the background or stand at the window, just in case we wanted more, or thought, oh, we should check in with him.

There's one scene where Jojo and Elsa are talking in the bedroom, and they're getting interested in each other and becoming friends, Jojo's starting to realize that she's a normal person. At one point, because I'm part of his consciousness, the part of him that's torn between Elsa and Hitler summons me up and I'm scratching at the window. I loved that mirroring the fall of the Third Reich with Hitler's paranoia, and his uniform's falling apart, and he's becoming more like a junkie. I love the idea of that, his buttons falling off, and his hair's not quite as slick. By the end, he's a complete mess, and he mirrors Goering at the Nuremberg trials, who was a junkie at the time. He was a heroin addict, and you can see him in the dock scratching and shaking.

SM: It never occurred to me before, if you had been one of those people who venerated Hitler, when you got word in passing, "Oh, yeah, he killed himself," that your whole world would disintegrate. It's like now with neo-Nazis who venerate Hitler. Are we all conveniently forgetting that he killed himself because it had all gone to shit? He'd rather kill himself than face the mistakes that he had made?

AC: It's the baffling part of neo-Nazism. It's a personality cult around someone who's dead, and lost.

SM: It's one of the world's biggest losers, in every sense, but they're still, "Yeah, this guy! Let's celebrate his birthday again!" 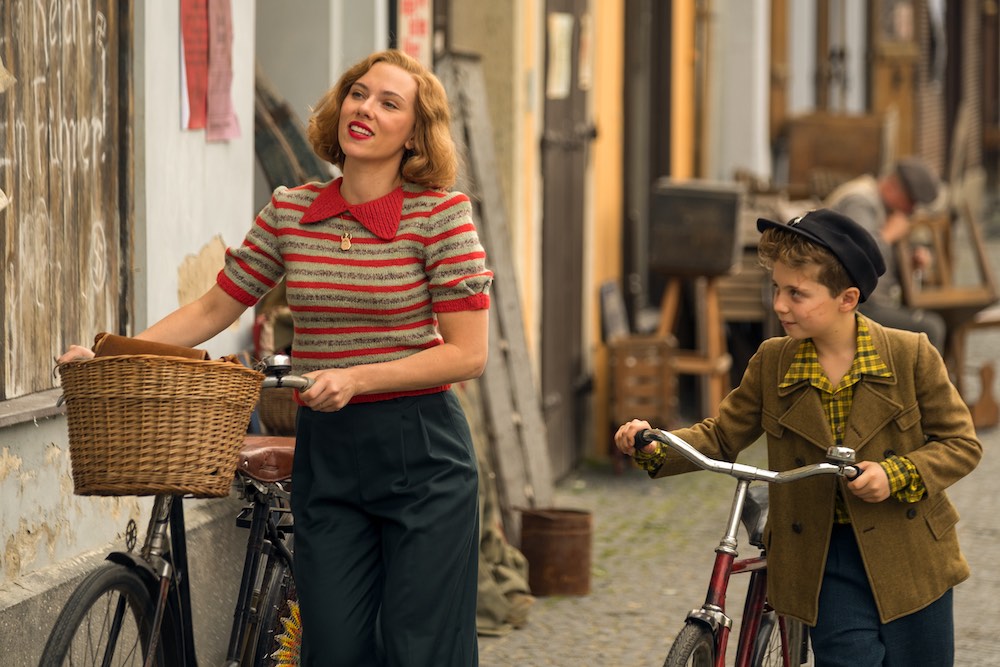 "She's a single mother who's trying to protect her one remaining kid from falling into this trap of hate and intolerance." Taika Waititi explains why Jojo's mother (played by Scarlett Johansson) plays the clown.

AC: You also present characters not always seen in films about Germany at the fall of the Reich. There's Sam Rockwell as the soldier who does what he has to survive without being a true believer; there's what's left of the German resistance; and then Scarlett Johansson as Jojo's mother.

TW: First and foremost, she's a single mother who's trying to protect her one remaining kid from falling into this trap of hate and intolerance.

The film's set in the last months of the war, and everyone knew they were losing. Someone told me that, in those months, the Germans all knew they were going to die, and that the Russians were coming and it was all going to be over. So a lot of people would go out every day thinking it was their last. They would dress up in their best clothes, wear all their makeup, and they spent their last months partying because they were on their way out. The world had lost its mind because nothing made sense any more, and so she was trying to raise her kid at a time when that's happening.

So for me the only thing that was important with that character was that she was the most sane person in the film. Even though she acts like a clown, like Benigni in Life Is Beautiful, she's keeping some spark of innocence alive in this kid at a time when he can easily turn and be lost to her.

Jojo Rabbit is in theatres now. For our four star review and listings, march over to our Showtimes pages.