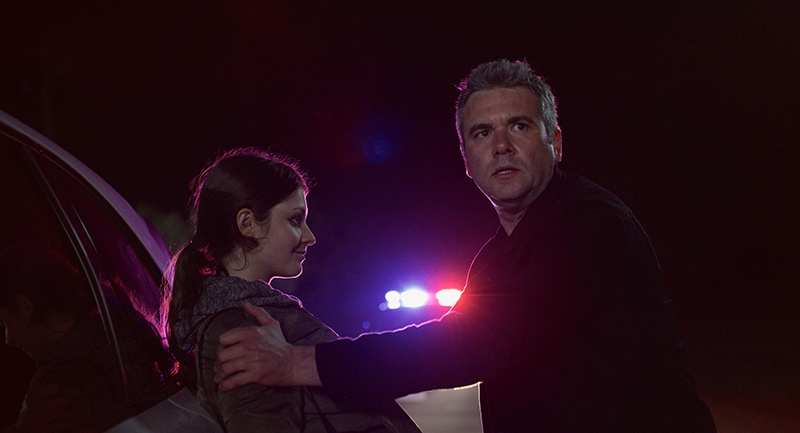 There's something inherently terrifying about ridesharing. The idea of getting in some random stranger's car, or having strangers in your car, is fertile ground for Night Drive.

In this case, it's unsuspecting driver Russell (Fantastic Fest regular AJ Bowen) who gets drawn into the strange wake of Charlotte (Sophie Dalah), but writer/director Meghan Leon came at the story from the other side of the app. "I take a lot of Lyfts and Ubers, and I've had some pretty weird drivers," she explained. "Just being with somebody who's kind of off-kilter is already a strange experience when you're trapped in a vehicle with them, and that's something that I wanted to explore, that when you're stuck with this person you have to roll with what's going on."

Bowen (who described playing Russell as "a rare opportunity to be the audience ... to be the character that's going through the movie the way the audience would see it") has spent his share of his time as one in the driving seat: nominally in charge of the vehicle but at the beck and call of passengers. "You can zone out, but there's this huge proximity with another person, physically," he said. "This one person didn't talk to me at all. This one person started vaping in my car, which when I'm not driving my child is – which is a huge problem. ... There's a deleted scene in this movie where someone's in the front seat, and that's happened to me. Someone got in the front seat of my car and I went, 'Well, I guess that's happening now.'"

Night Drive reunites much of the team from Dead Night (which played at Fantastic Fest in 2017 as Applecart): Bowen, director Brad Baruh, Leon, Dalah, plus the addition of Bowen's longtime collaborator Scott Poythras in a vaguely mysterious role. Per Bowen, "Scott's character is so tightly wound with plot and story mechanic. Everything he's in is incredibly consequential. I'm just in a hang movie and talk for 90 minutes about my feelings and shit. But any time he shows up I can't say anything except, 'It was a privilege to work with Mister Poythras.'"

Austin Chronicle: When did the decision come for Brad and Meghan to codirect? Because a lot of people have these fixed ideas about who does what on a set, and what a title means, but it's always more fluid than that.

AJ Bowen: When there's five people making a movie, the hierarchy's a little different. We're all bunk mates at camp.

Meghan Leon: Well Brad and I have worked together for about ten years, and he's done a lot of producing-directing, and I do a lot of producing-editing, and I edited his last film, Dead Night, and I was on-set for production. Not to speak for you, but I think my presence was really helpful. Then the fact that I had written the script, I had a lot of insight on how the characters would go: and because it was such a small production, and he was working the camera, it was like he was pictures and I was words. There was never a conversation about "You're going to do this, and I'm going to do this." We just fell into a natural rhythm where he'd take care of certain things and I took care of other things. Especially for how quick the production was, it really made things work very smoothly.

Brad Baruh: And we've worked together for ten years, and we've had great success - she's a great creative partner and she has always has been. On Dead Night I had her there because it makes great sense to have your trusted editor there to help with coverage, to help with schedule, to help with choosing what you're going to miss out. So it was pretty evident when we set out that we were going to be doing this together, and as we were working every day on our day job, we'd just be chatting, and the story just started coming together. She'd turned it so well that it seemed obvious from my perspective that we'd do it, even with a large crew. It was an amazing experience, because we do have a shorthand, we don't get mad at each other, and if we do we get over it.

AB: Guys, we were arguing in the car on the way over.

ML: It was just you. The two of us are fine.

BB: But if you have like-minded sensibilities, I think having a codirector is a great call. I'd rather codirect with her than not.

ML: Than not direct at all? AC: And it's your second night-based film in a row.

AB: We omitted the snow but it didn't make it any easier. Making a movie on the side of a mountain in the desert, when you know that when the wind is stronger than 10 miles-an-hour it's knocking all the lights down.

AB: Because the wind got up to 35 miles-an-hour, so you're up there with the wind going woooosh.

There was one night when Sophie was off in the darkness, and we just heard her screaming, and my dad-mind just kicked in. I stopped whatever I was doing, and I just start hauling ass, full-speed to go kill whatever was out there. We'd heard there were mountain lions, cougars, and I'm just seeing in my head that Sophie's being attacked, like The Grey.

SD: Sophie was just using the bathroom, in the middle of the field, and saw [actor and gaffer Andrew Enloe] coming towards her. So I was just going, "Please, I'm just using the bathroom, don't come near." So the minute I did that I see him go, "What? What?" and comes closer, and then I see AJ and then the next thing the entire crew running towards me. So I walked back, and everyone is just acting like it didn't happen. So I went, well, that's going to be a good story.

BB: But back to your question: It's tough staying up all night. I don't think we ever made a full day.

AB: Absolutely not. I would go up on set and say, "I'm ready for a solid 90 minutes of effort for you to use whatever way you want." I don't think that a lot of people understand that, when it comes to shooting at night, if you have a 12 hour day and a 12 hour night, that 12 hours you get at night is half the amount of 12 hours you get at day, because you have to wait until it's as dark as it's going to be to light it. We had a supermoon one night, and there's a moonshot in there, and Sophie and I are by a fire and it probably looks like a VFX shot because we were approximately six miles from the moon that night.

BB: And also that night the shot was blocked as French Overs from behind you guys in the opposite direction. But independent filmmaking, of course, we look over the mountain and that thing started cresting, we had to move everything around and honor the fact that we had this amazing moon.