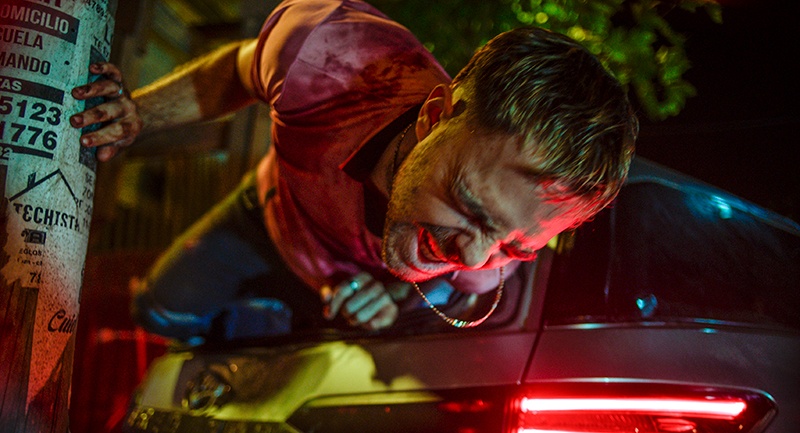 You’ve heard of a locked-room mystery? Argentinian thriller 4X4 doubles down on those hoary tropes when its pseudo-protagonist, petty thief Ciro (Peter Lanzani), finds himself trapped within the claustrophobic confines of the very vehicle he’s attempted to pilfer.

Director and co-screenwriter (with Gaston Duprat) Mariano Cohn have concocted an exhausting exercise in steadily mounting tension that ratchets up the suspense to almost unbearable levels until the third act, when its drawn-out conclusion threatens to tank everything that’s come before. (Note: I’m no expert on Buenos Aires politics, so there may be a location-specific subtext that I missed.) That said, 4X4 still pulls off a solid amount of notably original moments that make watching the action worth your time.

The premise seems almost too simple: Strolling down the street, Ciro breaks into a black SUV intending to steal the vehicle’s stereo. He does so and then goes on to piss all over the back seat, marking his territory, only to discover that the doors have locked behind him, his exit strategy is obliterated and, what’s more, the interior of the titular 4X4 appears to be welded shut. Initially he tries to kick out the windshields, to no avail, before pulling his pistol and discovering to his regret that those windscreens are bulletproof, resulting in a ricocheting round acing him in the knee. Further attempts to extricate himself from an increasingly dire situation result in a major wrist laceration and the dawning realization that he may well be stuck in this impenetrable tank of a car (it’s a “Predator” model) for some time. Passersby on the street outside – so close and yet so far – cannot see or hear him; one young woman does a quick makeup-fix in the mirrored glass to Ciro’s disbelief and mounting dread.

And then the vehicle’s onboard phone rings and Ciro’s circumstances become unimaginably worse. The car’s owner is on the other end and he explains that due to the many thefts and break-ins he’s experienced, he’s modified the SUV to become a literal prison, bait for whatever unsuspecting hoodlum dares to gain entry. The owner is a physician with a monstrous grudge against what he sees as a society riddled to the core with just this sort of random crime. He’s also something of a sadist, but to say more would ruin the multiple avenues of torture poor Ciro is forced to endure.

The success of Cohn’s film rests almost entirely on the performance of Lanzani, and he turns in a remarkable performance that runs the gamut of emotions from disbelief to dawning horror as the reality of his plight – no food, no water, no way out – begins to sink in. It’s a corker of high concept plotting and one that’ll make anyone in the audience think twice about breaking into another person’s property.