Fantastic Fest Review: In The Shadow of The Moon 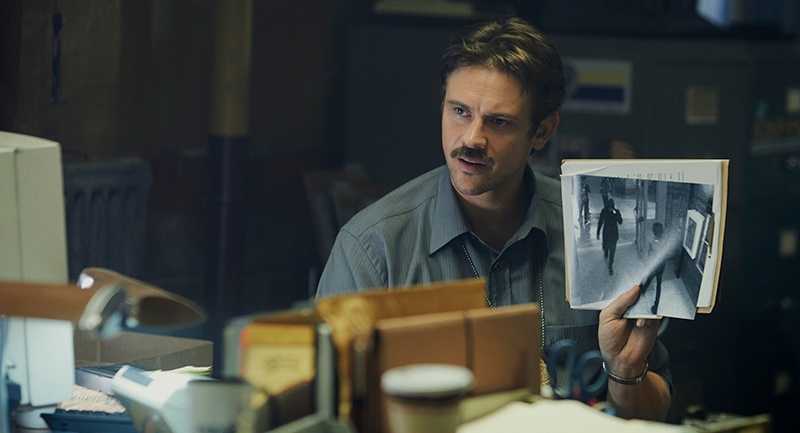 This cop drama/science fiction thriller/serial-killer movie jams in genres like an overstuffed piñata, but even if some of these narrative threads don’t completely fulfill their promise, the abundance of goodies that the film expels should keep most viewers happily munching along.

While not as gripping and penetrating as director Jim Mickle’s previous film Cold in July, In the Shadow of the Moon is nevertheless an engaging work.

The film opens with a profound mystery: a scene of mass devastation set in the future. Then the story jumps to the past in which a series of random Philadelphians are felled in one night when profusions of blood begin pouring from their orifices. Along the way, we learn that a serial killer is on the loose, although this murderer only surfaces every nine years. The story continues to jump around in time as Tom Lockhart (Boyd Holbrook) chases the time-traveling killer (Cleopatra Coleman). In his first appearance, Tom is an ambitious patrol cop who wangles his way into the investigation of the mystery. Next time around, he’s graduated to detective. And so on through the years. Through Tom we grow to understand how some actions taken in the present can affect the future. Bokeem Woodbine and Michael C. Hall play colleagues of Lockhart’s, and together the cast ably leads us through the intrigue. An expressive music score by Jeff Grace also amplifies the film’s foreboding.

Yet, as more of the questions raised by the film are answered, the story becomes less compelling. Unlike Cold in July, which contained as much character study as crime plot, In the Shadow of the Moon comes up short in regard to the human angle. The characters carry little emotional depth, which makes their connections seem more like a chess game than a human drama. Still, there’s enough mystery to pull the plot through, and all the technical aspects of the made-for-Netlix film are top tier.

In the Shadow of the Moon is available on Netflix beginning Friday, September 27.

In the Shadow of the Moon