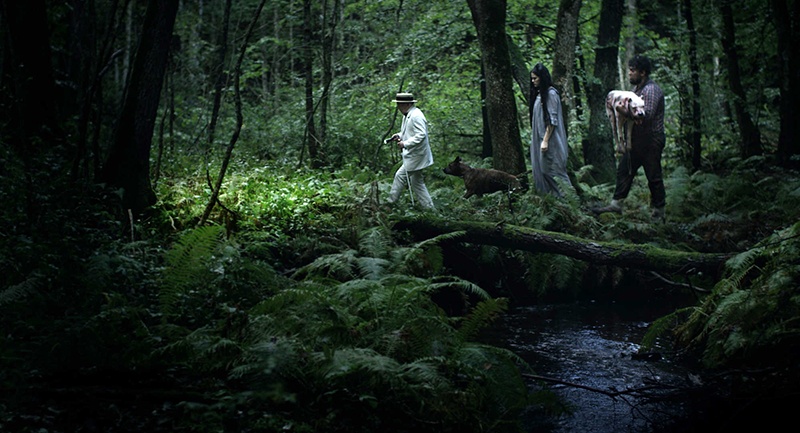 Time, True Detective told us, is a flat circle. Not so, says brutal and eerie Swedish-Danish supernatural splatter drama Koko-Di Koko-Da: it's a child's toy, constantly spinning, repeating itself.

On the side of that toy are three painted figures: a man in a white suit, a pale woman with strange hair, and a burly woodsman. They're on the toy when it is brought by Elin (Ylva Gallon) and Tobias (Leif Edlund) for their eight-year-old daughter Maja (Katarina Jacobson) as they head to an awkward celebration. And they're on the toy when she dies in a freak accident. And three years later, when the pair are quietly at each other's throats, the ugly trio are out in the world, hunting them down. And in the way of a spinning toy, every time the trio kills the grieving parents, they come back around again and again and again.

Koko-Di Koko-Da is the name of the nursery rhyme the chief thug, white-suit-clad Mog (Peter Belli), sings as the prelude to murder (if you feel like singing along, the "da" is pronounced "day"). The experience is like being stuck in the rewind section of Funny Games, as the pair are subjected to subtly different debasements before their eventual demise.

Writer/director Johannes Nyholm (The Giant) leaves few clues to any of this, of why these characters have made the jump from the toy to the real world, or why they plague these poor people. It's almost as if he's made them so absurd, so ridiculous, that their actions need no explanation, and the audience is supposed to focus on the couple. His instincts seem to be for complete contradictions: Childish nightmare characters pursuing fragile characters in the middle of an exquisitely mapped-out collapse; vaudevillian sing-song peppering vile crimes; a threat of ugly menace that ends in an elevated shot of the characters, static in woodland. Repeated, looped, ad infinitum.

It's hard to say whether this is merely laying cruelties upon suffering characters as a commentary on an arbitrary world, or a deeper, highly metaphorical analysis of the way grief bites into you over and over again. The ambiguity is exacerbated by obfuscation and messy symbolism, like a white cat that appears and reappears for no reason. It's all enacted with a grimy beauty, interrupted by some truly entrancing silhouette animation that will lure back the viewers put off by the mercilessness of it all. Nyholm has a point to make: it's just unclear if even he can explain what it is.