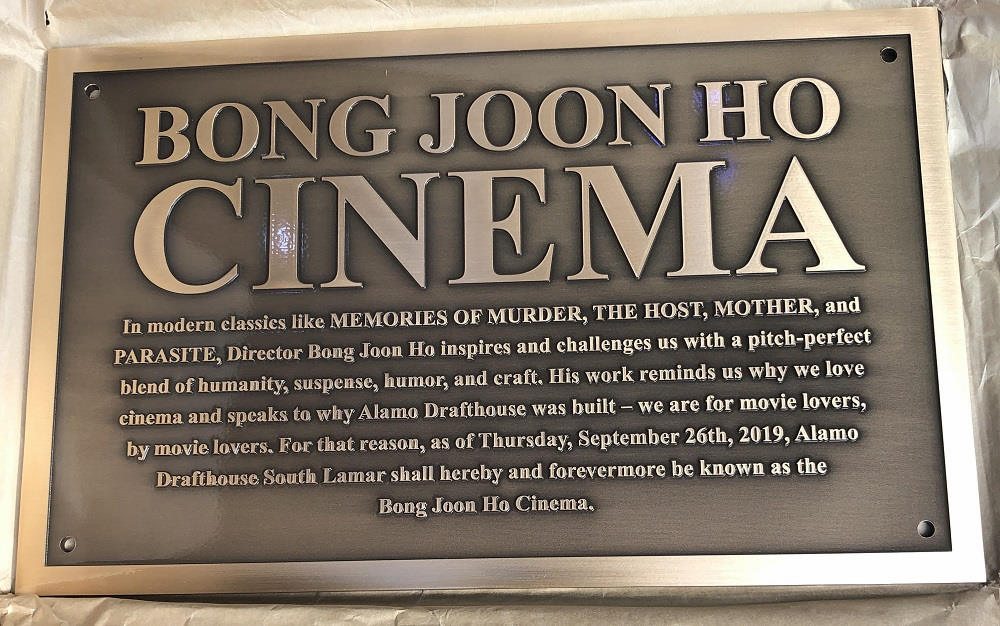 Time to stop looking under "A" in film listings for the Alamo Drafthouse South Lamar: the second oldest operating Drafthouse has officially been renamed as the Bong Joon Ho Cinema, in honor of the legendary South Korean director of The Host and Snowpiercer.

And so no one forgets in the aftermath of Fantastic Fest (which director Bong is attending with his new film, Parasite), the building will sport a bronze plaque, with an inscription written by Drafthouse founder Tim League who described Bong as "one of the most important directors of our generation." The full text reads:

In modern classics like Memories of Murder, Mother, and Parasite, director Bong Joon Ho inspires and challenges us with a pitch-perfect blend of humanity, suspense, humor, and craft. His work reminds us why we love cinema and speaks to why Alamo Drafthouse was built – we are for movie lovers, by movie lovers. For that reason, as of Thursday, September 26th, 2019, Alamo Drafthouse South Lamar shall hereby and forevermore be known as the Bong Joon Ho Cinema.

In response to the honor, Bong said, "It makes me very happy to know that cinephiles will come to this special theater with my name on it. This cinema makes me feel like I have a home to share with fellow movielovers in this wonderful city of Austin."

League has also announced that Bong's latest film, pitch-black social satire Parasite, will be the next title in the Drafthouse Recommends series, which is designed to highlight innovative films. Previous titles have included Eighth Grade, Call Me By Your Name, The Farewell, and The Favourite. Parasite opens in New York and Los Angeles on Oct. 11, before expanding nationwide.