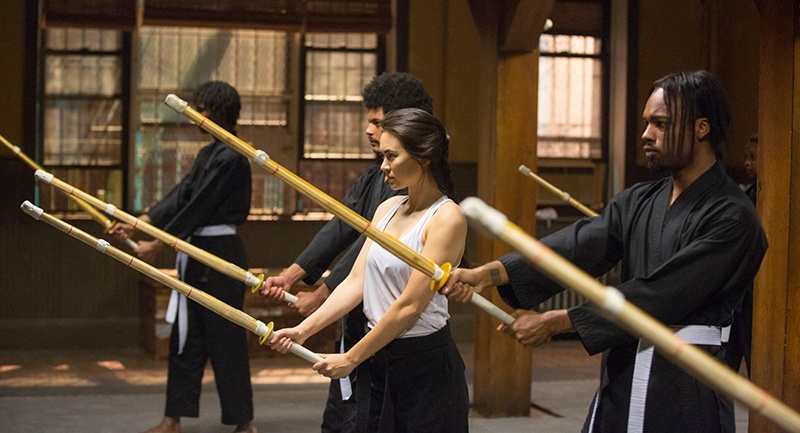 What is it with Aussie genre documentaries at Fantastic Fest? Whatever the connection, the end result is hellaciously entertaining, illuminating, and tremendous fun.

It started with Mark Hartley’s insanely fun Ozploitation examination Not Quite Hollywood in 2008: then Producer Veronica Fury joined in for Machete Maidens Unleashed in 2010, and 2014’s Electric Boogaloo: The Wild, Untold Story of Cannon Films. With Iron Fists and Kung Fu Kicks, Fury and director Serge Ou continue the tradition of picking a specific film genre and digging into the marrow of the topic with high-speed wit and editing. This time, it's Hong Kong action cinema masters the Shaw Brothers, and their challengers at Golden Harvest.

Exhaustively researched, Ou traces the origins of the kung fu flick in the mid-sixties to their mid-eighties heyday of both studios, before connecting the dots that move the genre from made-for Chinese-audiences romances and spy films to the birth of the global Kung Fu film phenomenon. Archival footage and brand new interviews with early wushu starlet Chin Pei-Pei (Come Drink with Me) highlight the gender inequality implicit in Shaw Brothers early sixties work. It's not until 1967, when a bloody strike and massive riots ripped through Hong Kong, that the studios and their swordplay-driven storylines got the gut punch needed. The seminal One-Armed Swordsman captured the tenor of the times both in the then-British colony of Hong Kong and abroad as the Vietnam war began to peak, and youthquakes rattled the streets on both sides of the Pacific. It was a time of angry young men standing up to ruthless authority and within a few years studio head Run Run Shaw would see his films find a new market in a politically polarized America.

Iron Fists… touches on everything from Shaw’s failure to realize the star power of Bruce Lee and Jackie Chan, while newcomer Golden Harvest Films glutted 42nd Street grindhouses with mass produced Kung Fu mayhem. At the same time, the cultish David Carradine-starring television show Kung Fu made its debut, bringing the Asian action into the American living room and inspiring everyone from interviewees Fab Five Freddy and Michael Jae White to the literally burnt-out Bronx’s nascent hip hop scene. They embraced Kung Fu as a classist manifesto: angry young black men attempting to forge a better life through rap and b-boy battles that, in retrospect, were totally influenced by Peking Opera movies.

Director Ou draws a direct line from Shaw Brothers studios to the birth of parkour in France, all manner of disenfranchised youth across the globe (the film ends with a wild denouement of sorts immersed in the microbudgeted but maximum violent Kung Fu-meets-Ugandan politics scene, stopping to note the wire work in The Matrix films and even traveling to Thailand to spend some time with Tony Jaa’s Muay Thai moment in the international spotlight).

Ou's fast trip provides newcomers with a hallucinogenic advanced film history lesson that’s certain to send previously unfamiliar viewers to whatever streaming site or—please people—brick-and-mortar video outlet to discover even more on their own. Commendable indeed is the documentary that piques the audience’s interest that much, which is exactly what Ou does. For a documentary so heavily front-loaded with well-researched observations on both the cinema of Kung Fu and the genre’s persistent presence in the real world, Iron Fists… is a deliriously fun ride.