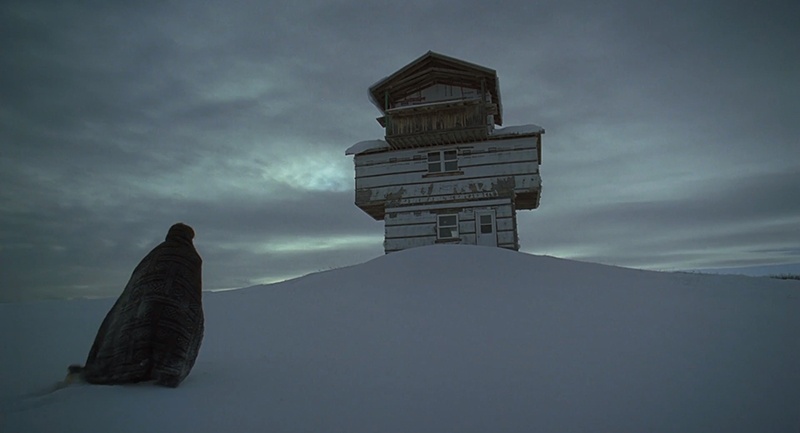 The essence of drama will always have a thread of cruelty sewn into it (even the clown slipping on a banana skin hurts his ass). If the characters are not subjected to some kind of existential driver then there is no reason for them to enter into the story. The Lodge embraces that cruel streak as its raison d'etre.

It begins with those small cruelties that mean everything to those involved. A family has been shattered: The father (Richard Armitage) has run off with a younger woman (Riley Keogh), leaving his estranged wife Laura (Alicia Silverstone) to look after their children, Aidan (Jaeden Lieberher) and Mia (Lia McHugh). But he wants to make Grace part of their lives, and a Christmas holiday in the backwoods, just him and Grace and the kids, is the way to do it. Except the kids hate Grace, and he can't be there, and they already know her dirty little secret, about how exactly she and their father met.

The script, by Scottish scriptwriter Sergio Casci and directors Severin Fiala and Veronika Franz, remixes many of the elements of Fiala and Franz's first film, the equally tricky Goodnight, Mommy. Claustrophobia, delusion, unwilling mothers, antagonistic children, but adds strands of faith and religion, meshing cult beliefs with cabin fever, and the interplay of innocence and naivety, punishment and contrition. They deliberately play with sympathies, not even really clarifying who is the victim and who is the villain - if those words really quite apply - until the story crystalises around a startling, heartbreaking performance by Keogh, the walking definition of inherited damage.

The icy beauty of the countryside, in contrast with the claustrophobic wood paneling of the lodge, creates two equally terrifying environments to let this psychodrama play out. It's a unique counterbalance: It's unfortunate, then, that Fiala and Franz are so heavy handed with their symbolism, both religious and in the use of a doll's house (horror directors should declare a moratorium on dolls for the next couple of years, until memories of Hereditary wear off). Yet the biggest issue is that cruelty. It's all emotional, rarely physical, and almost bloodless, but it's so constant as to be grueling. It was there in Goodnight Mommy, and it's not that Fiala and Franz relish it. Instead, it's that they place so much emphasis on it that they lose perspective. After a while the knife is so twisted that all is left is sadness, and the denouement is inevitable. That may be the point, but they make it sooner than they realize.