Fantastic Fest Interview: Every Body Has a Story in The Mortuary Collection 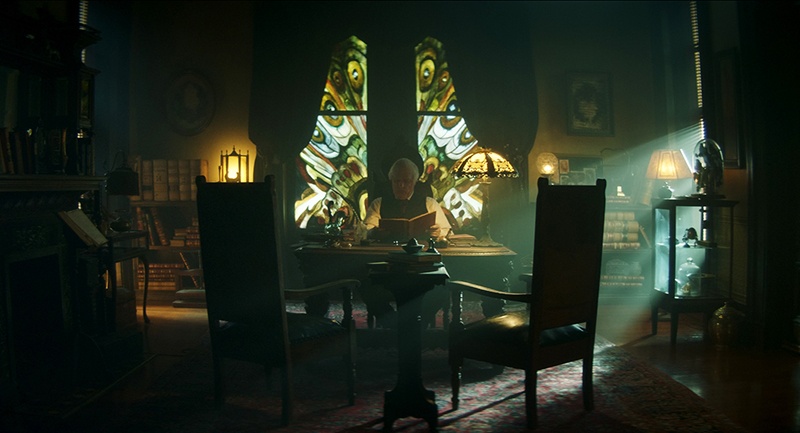 There are stories to tell in The Mortuary Collection, starring Clancy Brown, which gets its world premiere at Fantastic Fest this weekend

When the corpse is dead and decayed, what a life really comes down to the stories we tell, and the stories we tell. And in The Mortuary Collection, it's the mortician who collects those story. But writer/director Ryan Spindell has quite the yarn to spin about archiving and collating those tales.

When he originally started writing, "horror was in the doldrums," he said, "and I remember thinking, 'What's an interesting format that I'm not really seeing any more?'" Fortunately, he'd been binging on the films of Amicus, a British studio that specialized in a particular subgenre of anthology film - the portmanteau. Too many anthologies are just a series of chapters glued together with some vague framing mechanism, or often just shorts packaged and unleashed as a block. Not the portmanteau. In them, the stories are part of the whole, and the framing mechanism isn't just some vague thread to tie them together. Instead, they are a part of the bigger story, and that's how it is in Amicus classics like Dr. Terror's House of Horrors and The House That Dripped Blood, and so it is in The Mortuary Collection.

"The horror anthology is something I've loved since I was a kid," said Spindell, "and no one was making them anymore - and keep in mind that this was pre VHS, pre- the aggregate kind of anthology that have come in the last few years. I'm going to hit this old format that people used to love, and I'm going to surprise everyone with something they haven't seen before. And then cut to me developing it for seven years, and watching these anthologies pop up left and right."

Even though anthologies were back, Spindell still found it was an uphill struggle to get The Mortuary Collection made. Not that he completely sat on his hands in that time: he extracted one of the segments - "The Babysitter Murders" - and shot it as a standalone short that actually played Fantastic Fest in 2015 (festival creative director Evrim Ersoy mentioned that his team was initially wary of showing a film that they'd already shown part of before, but that the finished anthology was so strong, and each segment worked so well, that they changed their mind quickly). Spindell, who funded the film through Kickstarter, explained, "The idea was that if we could make something really cool to show people the tone, they'll but into the larger world."

Did it change the mood of potential funders? Not exactly. "I got some fancy new reps, and I started talking meetings all over L.A., and they'd say, 'Oh, we love this short. What do you want to do next? Anything!' "Oh, I want to do this anthology movie.' And they were like, 'Anything but that.' So it was just like coming back to where it started."

But it's the old wisdom: one yes outweighs all the nos in the world. Enter producer Allison Friedman. "She said, 'I love this short, I love this feature. My boss would never let me make this, but would you mind if I try to raise money for this on the side?' I said yes, sure, and then I didn't hear from her for six months. Then I got a call from her out of the blue and she said, 'I got the money. Do you want to make the movie?'"

All the tales are told in the mortuary of Raven's End, a small town somewhere in the Pacific Northwest, at some undefined time in the atomic era. Yet the resident mortician, Montgomery Dark, (Clancy Brown) could have been there since the town was established, back in 1804. Now he's looking for an assistant, and when a young woman (Caitlin Custer) comes applying, he needs to know that she's up to the job. The embalming and draining of fluids don't seem to bother her, but every body has a story to tell ... 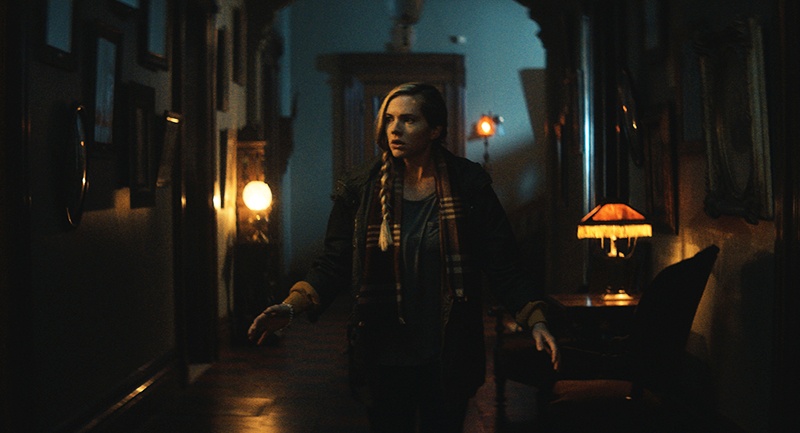 Caitlin Custer wanders the haunted halls in The Mortuary Collection

Austin Chronicle: The framing story here is why this works as a story, rather than as a collection.

Ryan Spindell: Thats's one of the things that I have been most critical about with other anthologies. Did you see Wild Tales? That film was amazing, but had no framing device whatsoever. It just went to black. So the challenges of puttung together an anthology made me think, is there a way that I can make this format of movie that I love but make people think it's a more traditional narrative in order to slip it through to them? So that's where building up the framing device was really born.

AC: And this idea that all that people truly leave behind is their stories, and the mortician is reducing the dead to that when everything else is gone.

RS: That idea came from the rejection of the idea of the short format being a valid commercial endeavor. One of my complaints about a lot of horror nowadays is that they're great concepts, but they're stretched into an 80 minute film when they probably should be 15 or 20 minutes. It makes a great trailer, and then you're watching it in the theater, and the first act is great and then it just falls apart. But there are so many great stories that benefit from that short format, so is there a way I can create an infrastructure to play those out.

One of the opening scenes of the feature, there's a sequence where the mortician is doing a eulogy at a child's funeral. He says that every life is a story, and it's not the length of the story that matters, it's the quality of the content within. In a weird way, that's me directly saying to the naysayers that even short stories are valid forms of entertainment as long as the stories are good.

AC: It's fascinating that there's still that antipathy, because the short horror form has rarely been more vibrant. It's Creepy Pasta, or Two Sentence Horror Stories. It lives in the simplicity.

RS: I remember when I did the "The Babysitter Murders," I had a lot of executives who just said, "Can you stretch this into a feature?" But that's going against the whole impetus of the project to begin with, to celebrate the power of the short format.

I think, also, growing up I was a big wimp, and I couldn't watch horror. My only outlet for horror-related material was the original Twilight Zone, which I would watch with my dad. Still to this day I am astounded by how much that series comes into play with every single thing that I have done. It's the foundation upon which everything I do is borne. And clearly that was a brilliant series with amazing writers - Richard Matheson, Rod Serling, Ray Bradbury - all working at the top of their game. It blows my mind how few people have really delved into that, because it's such a wealth of amazing content.